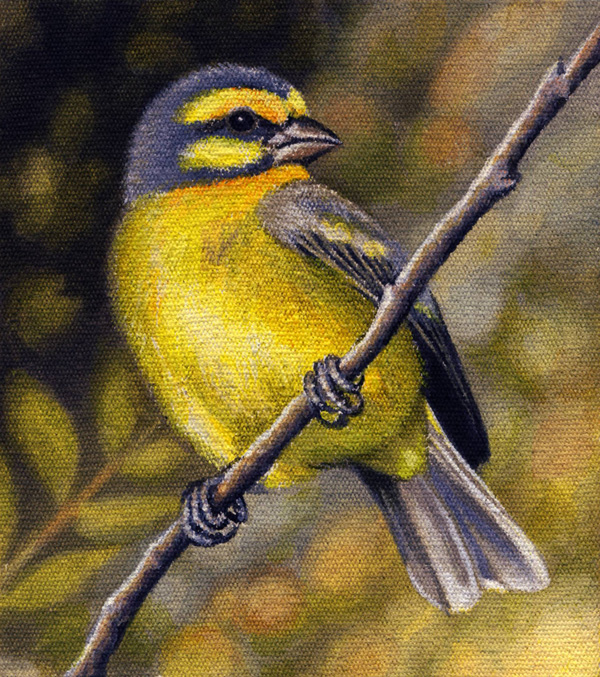 Today I present to you yet another feathered denizen of Africa, the CanaryContinent! This is a Yellowfronted Canary, sometimes called a Yellow-Eyed Canary, Serinus mozambicus (sometimes reclassified as Crithagra mozambica). This pretty and dainty little bird occurs all over sub-Saharan Africa, apart from the rainforest belt and the dry desert and semi-desert regions. It inhabits savannah and woodlands, provided there's a substantial layer of grass present as well as trees for perching and breeding. It also likes access to drinking water. It is adaptable and can also be found on farms, in plantations and in city and town gardens.


These and other canaries are some of sub-Saharan Africa's unique kinds of wildlife. They are easily able to fly around and colonize any scrap of suitable habitat, accounting for them being so widespread and successful. They are sometimes seen as alone or as couples, but mostly they congregate in small to large flocks, up to about a hundred birds. They are slightly smaller than sparrows. They are identifiable by their bright yellow eyebrow and moustache patches, which are sharply delineated with grey and dark-olive. They can be confused with the similar Yellow Canary, the male of which is overall much brighter yellow, with a somewhat larger bill and fainter head markings. Both yellow and yellow-fronted canaries have bright, cheerful warbles, the yellow-fronted's being often rendered as 'Yes, I see you', in addition to a variety of short chirps, twees and trills. Song seems to have some use for territorial advertisement, although being so social, they don't really have fixed individual territories.


Yellow-fronted canaries are versatile feeders. They're usually seen on or close to the ground. They pick up much of their food from the ground surface, relaxedly pecking and hopping about. Their food is mostly the seeds of grasses and weeds. They can crack husks to extract the nutritious kernels with their strong, conical bills. They also eat a small amount of invertebrate food, such as encountered aphids or eruptions of termites. They perch in trees to sing or to spy out their environs; they also feed on flowers.


These canaries can breed over most of the year, only avoiding the coldest and driest parts of winter. Male and female form pairs. We don't seem to know much about their mating displays; it might involve short flying 'dances' where the two birds spiral upwards with breasts touching. The nest is situated in a fork close to the tip of a branch, often where leaves provide shelter. It is a small cup made of fibrous plant bits, bound together with cobwebs, and lined with soft plant down, animal hairs or fine rootlets. Despite birds being members of a flock, they nest away from each other. Only the female builds the nest, while the male perches and sings nearby. He also flies with her as she gathers nesting material. She lays two to five, but mostly three or four, eggs. They vary from white to bluish to brownish in colour, usually with a few dark speckles. She starts incubation only when all the eggs have been laid. The male feeds her while she's incubating. In fact, she acts like a baby, quivering her wings and opening her mouth wide so that the male can regurgitate some food into it! The chicks hatch naked, blind and helpless. The male keeps bringing in food, first regurgitating it for the female who then passes it onto the chicks. After a few days of brooding the chicks, they are a bit more robust and now the parents occasionally leave them alone. Now they both set out on foraging excursions, returning periodically to feed the chicks. The chicks fledge aged at about twenty days, but for a time stay close to their parents, who keep feeding them until they learn to do it on their own.


Yellow-fronted canaries are abundant and widespread. They suffer on a small scale by being trapped for the cage bird trade, but this doesn't appear to impact their numbers significantly, and they're in no danger of extinction.