Deep Thought: Acknowledging Prejudice (and Then Beating the Tar Out of It)

We all have prejudices. And there is always a reason for them. The trick is not to let them sneak up on us.

For instance: I might be prejudiced against a style of cooking because I've never had it 'cooked right', to use my mother's phrase. She always claimed anything was edible, 'if you cook it right.' She said this about possum, and frog's legs, and anything else my mountaineer dad turned up his nose at. I still harbour doubts about whether anybody could prepare either a possum or frog's legs in such a way that I'd be able to eat them.

So, yeah, I have food prejudices, in spite of my mother. She once offered my dad a dish of very tasty fruit from a tin one of my students sent her. We couldn't read a word on the label, which was entirely in Chinese.

'What is it?' my dad asked suspiciously.

'Eat it, you'll like it,' my mother replied confidently. She trusted my students, who revered her.

I might be predisposed to prefer the ways of one nation or language group over another, based on my experiences with that group. I taught English to foreign speakers for quite a few years. Of course, some of my students were nicer people than others. But to condemn an entire country on the basis of one or two lousy students really isn't fair. So I try to keep as open a mind about the next Japanese person I meet as I have about the Vietnamese, Laotians, and Hong Kong Chinese. Just because the wives of the piano factory executives were kind of snooty is no reason to miss out on a possible friendship. The same goes for Chile (lovely woman!) versus Venezuela (airhead, talked rudely to her neighbour during class). It takes all kinds.

The trick, say I, is to become aware of a prejudice, lest it sneak up on you unawares. As Mark Twain once wrote, 'Ne pouvez-vous pas pull that dodge on me again.' The first thing to keep in mind is that – contrary to what all the newspapers claim – having a prejudice isn't a character flaw. It's just a temporary condition based on incomplete information.

Somebody I know (okay, Elektra) once made a university friend mad by laughing when she said she was looking forward to the Neil Diamond concert. Elektra hadn't heard much Neil Diamond, and thought it was an odd thing to get excited about. I played her some Neil Diamond, and she changed her mind. The guy is good at what he does, and I happen to like 'Crunchy Granola Suite'.

As a child, my dad knew exactly one family of Jews. They ran what you called a 'sweat shop' in the nearby Tennessee town during the Depression. My grandmother and great-aunt worked there. The term 'sweat shop' was appropriate: they clocked the temperature in the summer at 114° Fahrenheit under those machines. My dad didn't like those people very much. It is possible that he harboured resentments, and felt that maybe Jews weren't nice people, even if Jesus was one.

He grew up, my dad did. He fought in Europe during the Second World War. The survivors moved him: they weren't any different from the people he'd left at home. He felt sorry for refugees, all of them, Germans and Russians and Jews. All of them.

He came home, and went to the local university. He became an engineer. In Pittsburgh, he used to commute to work with two colleagues. One was a grumpy but lovable Episcopalian. The other was a cheerful Jew. They were good friends, and teased each other unmercifully every workday.

I studied German. I also studied Yiddish. I learned a lot about what's called Judaica. My dad was really interested, and asked a lot of questions.

Prejudice grows out of a state of ignorance. And as my old friend Miss Lindquist taught me, 'Ignorance can be overcome. Stupidity is not wanting to learn. That can't be cured.' I'll have more to say about stupidity, and whether I think it's curable, another day. Right now, let's just think about prejudice, and what we can do about it.

The cure for ignorance is learning. So: learn. You think Islam is an evil religion that teaches nothing but hate? If you can, talk to the most reasonable, good-hearted person you know who is a Muslim. Don't know any? Read about the history and people. Don't read or listen to extremists from any camp. Try to find out the reality behind the stereotypes. By the way, that goes for any point of view, religious, political, even aesthetic. You're not going to agree with everybody. But you should at least know what you're talking about before you criticise.

Don't let people push your buttons. The absolutely worst thing about prejudices – even worse than the fact that it might make you miss out on the blessing of a treasured friendship – is the fact that prejudice gives other people power over you. Particularly cheap politicians. If an advertiser, a demagogue, a badly-intentioned influencer knows how to get you to react without thinking, he can manoeuvre you into acting against your own better interest. You can lose money. You can lose independence. You can lose things you hold dear. Just by listening to those manipulative so-and-sos. They don't care what happens to you. They only want to take the shortest route to your wallet or your vote or your support for whatever harebrained, self-serving scheme they've got cooked up.

Don't let them rob you. Realise that prejudice – any prejudice – is the natural result of incomplete experience. Inform yourself accordingly. Let your motto be Noli illegitimi carborundum. (See me after class for translation.) 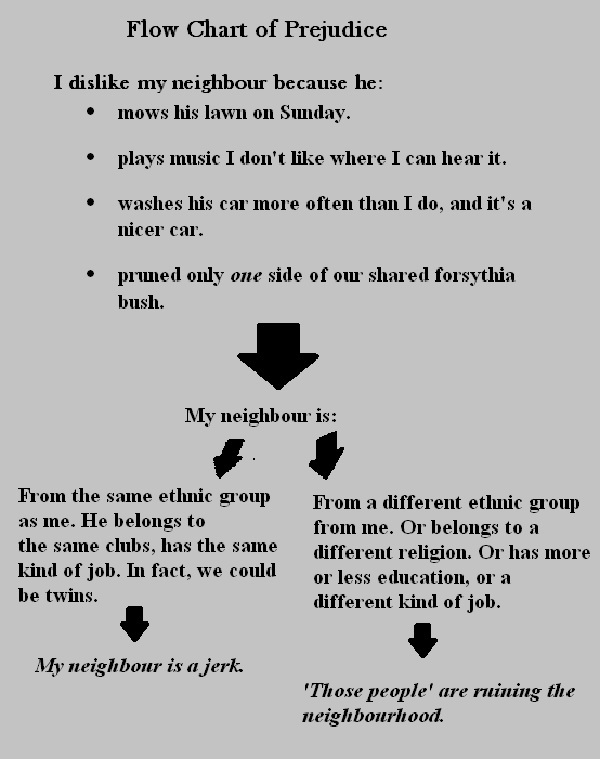