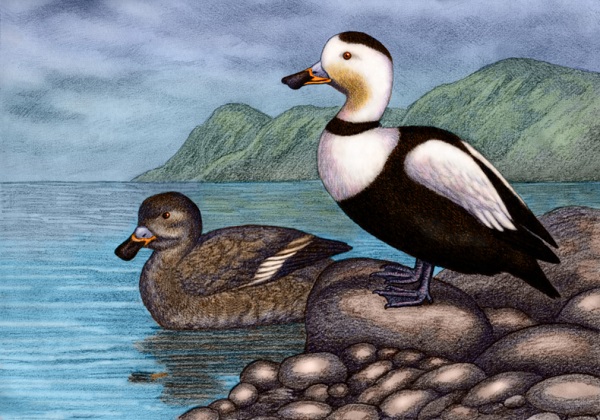 I hope you'll pardon me for again dedicating an article to an extinct species. I don't want you to feel sad about it, but to appreciate this thing for its beauty and uniqueness. It's a tribute. Also the idea of these articles is to give you, O Reader, a sense of just how diverse life is and has been on this planet, and for that, we also need to consider all the things no longer with us. All of that shows us the practically limitless variations of forms in which life can express itself. And that includes us! We are part of the tapestry of life clothing this planet, and now, we have so much influence on that tapestry. Our influence has been for the worse in many ways, but it needn't be so – we can do so much good, if we only understand what we are doing, and take responsibility for it.


Good, so here you have a couple of Labrador Ducks, Camptorhynchus labradorius. It's not named for a dog! The dog as well as the duck are named for the place, Labrador, the eastern parts of the Ungava Peninsula in Canada, part of the province of Newfoundland and Labrador. The duck occurred here and in the Canadian province of Quebec and also further south along the eastern coast of the USA. It lived along sheltered bays and sandy coasts, breeding in the north of its range and probably moving southward in the cold of winter, but we never knew much about either its breeding behaviour or its movements. It had an unusual, rather soft bill with a wide tip, and it seems to have fed on crustaceans, snails, mussels and other kinds of shellfish by grubbing around in the mud in shallow sea-water. It had small, beady eyes, and touch was likely its most important sense. As you see here, there was considerable differences between the male (pictured standing on the right) and the female (to the left of him on the water). The male was dashingly feathered in black and white, while the female had a more subdued greyish or brownish plumage.


There's at least one person online alleging that the Labrador Duck never was a proper species, but simply a hybrid between two other species, the Common Eider, Somateria mollissima, and the Steller's Eider, Polysticta stelleri. But if so, then such hybrids would still be around since both species are still numerous and their distributions overlap in the Pacific Ocean region, and if they were hybridising then, they should be hybridising now. And Steller's Eider does not occur on the Atlantic seaboard of North America, where the Labrador duck was found. So it is quite certain that it was indeed a unique species that we've lost for good. It was indeed a relative of the Eiders and other sea ducks, but distinct enough from them to warrant a genus of its own.


Even at the time of its discovery in the Nineteenth Century, the Labrador duck appears to have been quite rare. People at the time were not very precise about the names they used, and often called this species the Pied Duck, along with two other duck species, the Surf Scoter and the Common Goldeneye; it was also called the Skunk Duck. It's therefore somewhat difficult to figure out whether popular accounts do indeed refer to this species or not, and thus we can't be sure about the nests the famous ornithologist John Audubon found on the tops of low fir-bushes said to have been those of 'pied ducks'. Labrador ducks were shot and collected and there are at present 54 or 55 stuffed specimens in museums, as well as nine eggs that are attributed to them – about which, again, we can't be quite sure. There are pretty much no records of any observations of living individuals of this species.


The passing away of the Labrador Duck was also not noted at the time. Looking back, the last individual recorded was one that was shot in 1878 … although the identity of this one is not 100% certain; it was last reliably seen in Long Island in 1875. Only later did we realise that it was completely gone.


But why is it gone? It was rarely seen, rarely hunted. Its flesh was said to taste bad and to spoil quickly. It might have been hunted for its feathers, but again there are no records of this ever happening on an appreciable scale; neither do its eggs seem to have been collected much. The likeliest factor is a slow but steady alteration of its habitat as a result of an increasing human population around the eastern shores of North America. The people founded coastal towns and harbours and there were soon many ships and boats frequenting the coastline, and human pollution also affected the waters. These factors might either have disturbed the birds, or changed the conditions in which their favourite food animals lived, to the point where the birds couldn't effectively feed or breed any more. It was likely just a very specialized and sensitive species. When conditions changed, it was just not able to adapt to them, and thus vanished.


This doesn't mean that it was an inferior kind of creature that deserves to have vanished. If given just a bit more time, it might have adapted and survived. Planet Earth is a living, changing planet, and has been so for all its existence. Continents move, mountains rise and fall, climates change, and occasional large-scale calamities happen such as asteroid or comet strikes or massive volcanoes erupting. But life remains, ever since it first arose perhaps over four billion years ago. It survived whatever disaster was thrown at it. In normal times, through normal changes, species slowly evolve, thrive for a while, and then die out or change into something new. This slow process has over time meant that more new species arise than old species die out, so that there's been a gradual increase in the total biodiversity of the Earth. There have been times of crisis, during which there were mass extinctions, such as 'Snowball Earth' about 600 million years ago, the end-Permian extinction about 250 million years ago, and the disaster that wiped out the non-avian dinosaurs about 65 million years ago. We might be in such a period right now, a mass extinction caused by us humans, during which species are going extinct much more rapidly than new ones are evolving. But as in the past, so too there will be species that survive the present extinction and that will re-diversify in the future. But that may take millions of years. The planet itself will survive for many millions of years more … but we humans likely will not. We owe it to ourselves to enjoy and appreciate the life we see around us, and to cherish it. If we cause a mass extinction, then we ourselves will be living in an impoverished world for our own foreseeable future, with just so much less opportunity to learn about the phenomenon of life.