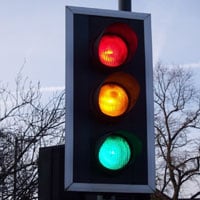 Wendy hated traffic. As she stepped outside her house with her shopping trolley, she stopped and looked at the road. Two big orange lorries full of building material rumbled past, followed by a string of cars. The lorries scared her, with their wheels which were big enough to squash her flat, while the cars were always in a rush to get somewhere else. She had only to walk to the corner, then catch the bus into the centre of the town, but she always kept as far away from the traffic as possible. Sometimes, when the traffic scared her, she held on to bushes and trees people had planted in their gardens. On other times she followed closely behind a mother with her children. She liked being close to children, as they reminded her of the childhood of her own son and daughter.

That was another thing that made her anxious. There was a school further down the road, beyond the bus stop. Many of the parents drove their children to school, which made the traffic worse at the beginning and end of the school day. Some of the poorer parents, and those who lived close by, walked with their children. Wendy watched the children and the traffic and imagined terrible accidents. She could almost hear the screech of brakes and the cry of horror.

There had been a time when the road into town had been quiet. Her husband Terry had often driven that way, through the town centre and out into the countryside. She had enjoyed those drives and the walks they used to do, up the South Downs and along the ridge for miles. He had always done the driving. So, when he died three years ago, she had felt stuck. However, her daughter had helped and she had found the bus reliable. She managed to go shopping and meet her friends in the town centre.

More recently the builders had arrived, to construct a big estate on the far side of the town. It was then that the big lorries had started to rumble past and, as the estate filled up, the traffic on the road grew heavier. Now, she watched the lines of cars, lorries and buses with a sense of horror. A friend had said, half teasing, that Wendy had a phobia of traffic. She had asked her doctor if there was such a condition, but he had laughed and said there was only 'vehophobia', which meant a fear of driving in traffic. That made her cross. 'It's not the drivers who should be afraid,' she said. 'It's the poor pedestrians.'

This morning, she set out early, because she had a dental appointment in the town centre. It wouldn't do to keep the dentist waiting. It was a pleasant morning, with the sun lighting early primroses in gardens and a few green shoots on bushes. Two mothers were walking a few yards ahead. One had two young girls with her, while the other walked with a small boy holding onto a buggy seating a toddler. A child called out from the far side of the road and Wendy looked across, to see a boy standing beside his mother. Suddenly, the little boy ahead of her made a dash across the road, apparently in a bid to join his friend. Wendy saw a big orange lorry bearing down on the group and a sense of terror lit in her, making her forget everything except a vision of the little boy and big wheels, and she rushed into the road, grabbed the child and hurled herself back towards the pavement. She heard a screech of brakes and cries of fear and looked up to see the lorry stopping a few inches from her body. A moment later, people were rushing to her aid. A weeping mother took the boy from her arms and cuddled him, while someone else helped her to her feet. Her knees were bleeding and she ached all over.

'That was very brave,' said a mother.

Wendy considered this possibility and rejected it. 'No. I just hate traffic.'