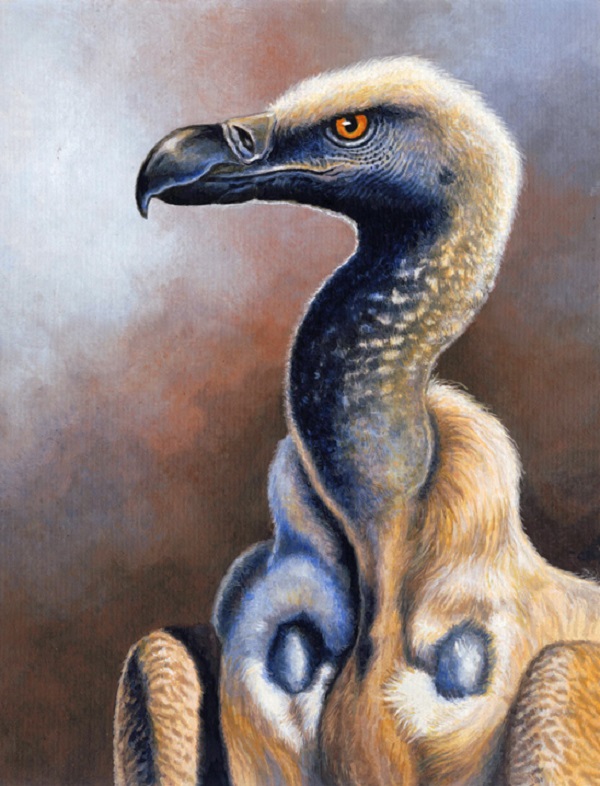 This is the last, but not the least, of the vulture species to be covered here. The Cape Vulture, Gyps coprotheres, rivals the Lappet-faced Vulture for being the largest vulture in South Africa. It reaches a wingspan of 250 cm/8'2.5" and a bodyweight of 11 kg/24 lbs. The scientific name means 'dung-hunting vulture'. It refers to the way this vulture eats … when it finds a large dead mammal carcass that hasn't yet been opened up by carnivores or other vultures, it will gain entry to the carcass by the easiest route, through the rear opening. It is not actually after the dung, but it might look that way! These are 'inside' feeders, sticking their necks as deep into the carcass as they can. They have tongues shaped like coal scuttles, with hard, sharp projections at their margins, with which they rapidly scoop out and swallow bits of meat. They can eat their fill, ingesting about a kilogram of meat, in three minutes. That would be equivalent to a human eating 7.5 kg (16.5 pounds) of meat in the same time! A vulture in good initial condition can survive for a month without food.


The short, coarse, sparse down on the heads of these vultures becomes caked with blood and yucky stuff while these vultures feed, but they don't like being dirty and usually go to have a bath (and a drink) immediately after they feed. This sometimes leads to them drowning in steep-sided reservoirs.


When seen well, Cape vultures can only be confused with White-backed Vultures. They are larger, lighter in plumage, and up close can be seen to have yellow eyes rather than the light brown of the white-backed. They also have a pair of naked skin patches on the breast to either side of the crop. These patches are pinkish in juveniles but bluish in adults. These naked patches have temperature-sensitive skin that is believed to help the vultures locate the thermals or areas of warm, rising air they use to soar on. Human pilots of gliders or hang-gliders use vultures in turn to find the thermals and updrafts they need for their flights.


This vulture was the first one in South Africa to become seriously endangered … now all of our vultures are endangered. Cape vultures occur not only in the Cape provinces but over most of Southern Africa, particularly in open regions, including semi-desert. They are chiefly restricted to the region, but vagrants sometimes straggle to countries further to the north. Their main habitat requirement is for cliffs to breed on. Their nests are placed on ledges where they are very hard to reach and safe from most predators other than birds. Sometimes their chicks are preyed on by black eagles. But that is not why they are endangered.


There are several big problems that have resulted into crashing populations of this huge vulture. They're poisoned, deliberately or indirectly or by the veterinary medication Diclofenac; they're killed for their supposed medicinal properties; they are electrocuted by electricity pylons; they have lost their main source of food, the vast herds that used to roam Southern Africa's interior; and they suffer from calcium deficiencies. The last is because even where large herbivores occur, predators like lions and especially hyenas have been virtually exterminated. These vultures need such predators to chew and break the bones of their prey so that the vultures can pick up and swallow the shards. This is for them an important source of calcium. Without this, they desperately pick up and swallow litter that humans have dumped on the landscape like pieces of glass, metal or plastic – but they get no calcium from these. This leads to brittle bones especially in chicks, which may suffer breakages when they first attempt to fly.


Fortunately there are today several 'vulture restaurants' in South Africa, where carcasses and smashed bones are put out for them. This gives them a safe source of food, but they still might get poisoned because they're likely to feed over far wider regions.


In addition to giving safe food for the vultures, we should also protect their breeding sites. These can be abandoned if there's too much disturbance by humans around them. The nests are low platforms of sticks and grass placed on ledges above and below cliffs, making access to them very hard. The nest is lined with fresh, green leaves that are added throughout the breeding period. The female lays only one egg… two eggs have been found but may have been laid by two different females in the same nest. Egg-laying happens mainly in winter. The chick is fed by mouth-to-mouth regurgitation of meat and bone fragments by both parents. It fledges at a bit older than four months, but we know few details about how it matures beyond this point.


Because these vultures are so large, they breed slowly. It typically takes a couple 15 years to raise two chicks to the point where they, too, can have chicks of their own. If all goes well, vultures can live to the age of forty years or more. But it is vital that we protect them. The best safeguards would be ongoing feeding at vulture restaurants, protection of breeding sites, and public education about their overall value to humans and the rest of nature.