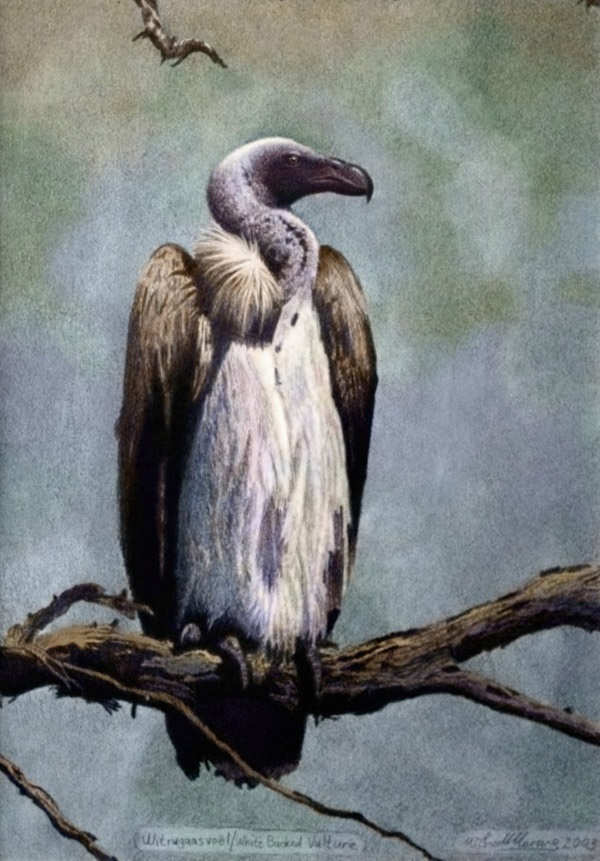 A vulture for y'all this time! This is a White-backed Vulture, Gyps africanus, although you can't see its white back here. Indeed, in nature, you rarely can, and only adults have the patch of white rump feathers. In South Africa, this species can only be confused with the Cape Vulture, which is much larger and has a white, not dark-brown, eye, and a generally lighter plumage. White-backed vultures reach 95 cm/38" in length, 230 cm/7'6" in wingspan, and 6.5 kg/14 lbs in weight.


Although vultures are not very beloved by people, they are extremely important members of the ecology. They very rapidly dispose of animal carcasses lying in the bush, which otherwise would rot and stink and risk producing diseases. Vultures first of all are able to very rapidly spot such carcasses. They are able to soar very high, from where, with their keen eyes, they can view a vast area. They soar almost effortlessly, using the updrafts of hot air over the savannah to lift them. Soaring in dispersed groups, a single vulture that spots a carcass will start flying down towards it, which gives the cue to other vultures to do the same, and so, a carcass is soon the focus point of large numbers of vultures.


There is a kind of pecking order between vulture species. Smaller vultures, with weaker bills, are not able to open up carcasses if the skin is intact. This of course is not a problem if the carcass has been killed by predators like lions or hyenas, which will have opened it up already. Sometimes the vultures will arrive while the big predators are still feeding, in which case they'll stand a respectful distance away and wait. Along with the vultures, other scavengers like jackals and marabou storks will wait as well. As soon as the carnivores have finished feeding, they'll move in. Jackals in turn can drive away single vultures, but then again, a mob of vultures can drive a jackal away. On a big carcass, different scavengers will be able to eat side by side.


If the carcass has intact skin, such as of an animal that died of hunger or disease, the white-backed vultures will typically wait for the much larger lappetfaced vulture to arrive. Indeed it's usually just a single one that will arrive at a carcass. The lappetfaced vulture has a powerful bill with which it can rip and tear the carcass' skin and so provide entry to the meaty bits inside. But because it is so big and strong, it can drive other vultures away. Only once it has finished feeding, can they in turn move in and grab their own bit of food.

Several different species of vulture co-exist on the African savannah, with different eating strategies. White-backed vultures are 'inside feeders', meaning they go deep into carcasses to get their food. Indeed, they are partial to the soft entrails. They have tongues that are scoop-shaped, with pointy barbs all around their edges. These tongues of theirs help them rapidly tear bits of meat and innards off the carcass for them to rapidly gulp down. Their heads and necks are not quite naked, but covered by short, bristle-like feathers. During feeding, their heads get smeared with blood and the entrail contents. But vultures actually don't like being dirty. After eating, they will seek out clean water as soon as possible so they can bathe themselves and get rid of the filth and stench. The short bristles of their heads and necks are easy to wash clean.


Still, vultures often deal with meat that has started to decompose. They rarely get sick, because they have extremely strong immune systems.


It is vital for the savannah ecology that a variety of vultures and other scavengers should exist. Different species of vulture target different parts of carcasses in different ways, thus ensuring that they are cleaned up completely and rapidly. In turn, vultures are also dependent on big predators and other scavengers. Hyenas, in particular, play a vital role. They have the strongest jaws of all African predators, able to crack the bones of even the largest mammals. Vultures can't swallow these large bones, but can and do eat the splinters of bones that had been cracked by hyenas. These bone splinters provide them with the calcium from which their own bones and eggs are made. They even feed bone splinters to their chicks, without which those chicks can't build sturdy skeletons. Thus, vultures can only thrive in areas where hyenas are also thriving.

Like other vultures, white-backed vultures breed slow and live long. Unlike the Cape Vulture, which nests on cliff ledges, they make their nests (or take over the large nests of other species) on the tops of trees like umbrella thorns or camel thorns. They breed in pairs, although they are not strictly monogamous … females have been seen mating with other males than their own mates. But once mated, the pair stays close and cooperate in raising the chick. It is typically just a single chick per season. Male and female make turns guarding and feeding the young chick, regurgitating bits of meat and bone into its open mouth. The chick takes about 120-130 days to fledge. But even when it can fly, it stays close to its parents, and are fed by them, for an additional six months.

Over large regions of Africa, both the native large herbivores and the predators that feed on them have been eradicated. Mostly they've been replaced by cattle, sheep and goats. In very rural areas, vultures often co-exist with humans and feed on discarded bits of meat and bone, but in more 'modern' areas, the more efficient methods of farming leave little over for the vultures. What's worse, many farmers combat predators like jackals, by leaving poisoned carcasses for them. Vultures often find these first, and since they feed in big groups, a single poisoned carcass can kill a dozen vultures or more. Also, vulture parts are highly sought for traditional medicinal purposes, for which more vultures are deliberately killed. Vultures also are killed by electricity. They often perch high on electric pylons, and sometimes touch the cables with their wings, necks or legs and are electrocuted.


At least humans are starting to respect and understand vultures. Today there are some large nature reserves like the Kruger National Park which support complete ecosystems with large herbivores, predators and scavengers. Outside these regions, there are several vulture restaurants, as in the photo, where farmers leave out carcasses and scraps to feed vultures and other scavengers. Thanks to these, vultures have some security, but it's not much. A single big poisoning incident can destroy a large amount of conservation work. Public education efforts continue. But in the meantime, all vultures are still in big trouble. In South Africa, pretty much all vulture species are presently threatened. Even the white-backed vulture, which has been the most abundant species, is now no longer secure. There is a lot of very hard conservation work ahead.