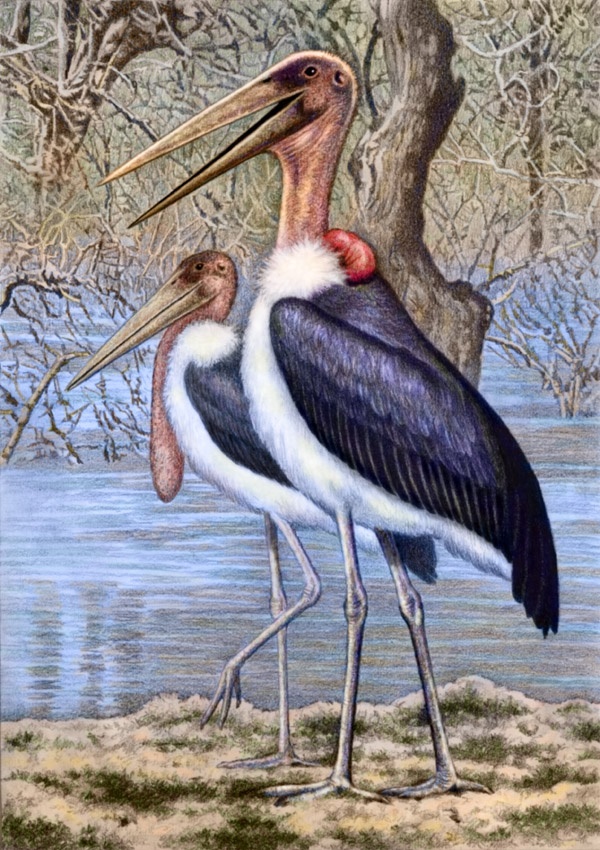 This time I have for you some critters even I consider ugly! This is very rare for me, since I can see the beauty even in things like vultures and warthogs. But marabous I must say are not pretty or beautiful in the aesthetic sense! But I would call them impressive and imposing. And I do appreciate them and am happy when I get to see them. They are not common here in South Africa, mainly being seen in the large game reserves like the Kruger National Park. But they are also easy to see in a few places here around Polokwane, such as the pig farm where I took the photo of them I include here. They are fed on pig carcasses and offal here … I edited the gruesome stuff out of the photo, I am certain many folks reading the Post would rather not see that! Marabous occur all over sub-Saharan Africa, except for the rainforest belt and a few unsuitable regions such as true deserts, or areas where they've suffered from humans exterminating the large mammals on which they scavenge.


The Marabou, Leptoptilos crumeniferus, is a member of the Stork Family, the Ciconiidae. Its name is derived from Marabout, a kind of Islamic holy man of which you can read something here. This is because storks are considered holy by some Muslims, or perhaps inspired by this stork's slow and stately stepping gait. Another name for them is 'Undertaker Birds', which quite fits their looks and lifestyle. Marabous are among the largest of all storks. It's not really possible, when seen at all well, to confuse them with anything else. They can stand 1.5 m/5' tall, and have a wingspan among the largest of all birds. They have been credited with wingspans of 3.7 m/just over 12'. This rivals the largest Wandering Albatrosses, which are currently considered the longest-winged of all birds. But more credible sources give the maximum wingspan of the marabou as around 3.2 m/10'6". This is still huge. The marabou reaches a bodyweight of 9 kg/20 lbs, which is again huge for a flying bird. Actually, for their size their wings are very large, not just long but broad as well. They allow these great birds to soar high in the sky like vultures.

Indeed, marabous present an interesting case in evolution. Though storks, they are very similar to vultures! They have become specialized for eating carrion. Like vultures, they have necks and heads mostly bare of feathers, though they can have a sparse head covering of coarse fuzz. They have very big, stout, sharp bills. These, unlike those of vultures, don't have hooked tips, so they can't easily rip through the tough hides of animals, or tear meat from bones. They'll often wait for vultures, jackals or hyenas to open up and start dismembering carcasses, then move in to pick up bits and pieces and gulp them down. Their soaring virtuosity helps them as well, allowing them to spot carrion from up high. Their eyes are not quite as good as those of vultures and eagles, though, so they mostly spot carrion by spotting a gathering of other carrion feeders; they are thus rarely the first to arrive at a carcass. They can use their size, strength and sharp bills to chase away smaller scavengers. In some places, marabous will congregate with other opportunistic birds around rubbish dumps to pick up anything edible they can find. They'll even swallow many inedible bits of garbage as well. They can also sometimes be found around abattoirs or fishing villages, eating the scraps and offal thrown away.

The big naked heads and necks of marabous are enhanced by some structures unique to them. First of all, marabous have inflatable pouches that hang down below their necks. In my illustration, you can see this pouch inflated in the bird at the rear. Marabous also have an inflatable pouch at the rear of their necks. This pouch you can see in the front bird in my illustration. The rear pouch is bright red, and inflated looks like a lump of raw meat sitting on the bird's upper back. Both of these pouches are connected to the birds' internal air sack systems, and can be inflated separately. This is used for display between the birds, an inflated pouch signalling dominance. 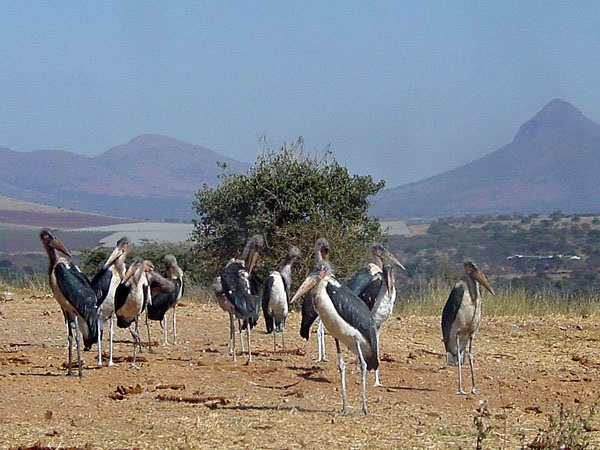 Apart from feeding on carrion, marabous can and do hunt for live prey. They will catch and swallow small mammals like rodents, birds up to the size of adult flamingos, reptiles like lizards and snakes, and frogs. Sometimes like other storks they can be seen hunting in wetlands, stepping slowly while scanning the water. They use the tactic of stirring the water with one foot and watching for any critters stirred up trying to escape, catching them by stretching out their necks and grasping with the tips of their long bills. They catch fish and sometimes even small crocodiles. A big attraction for them are the pools left over in riverbeds at the end of the wet season. When the rains stop, these dry up and shrink, so trapping concentrations of fish in them, like the big local catfishes, which then become very easy to catch. Marabous will congregate at such drying, muddy pools. Occasionally they wash their food in clear water before swallowing it. They also eat insects like locusts, crickets, beetles, termites or others they find by stalking through the grassland, though it takes a lot of insects to fill up such a big, gluttonous stork.


Most of the time when you see one marabou, there will be others close by. They congregate in big flocks where there are concentrated sources of food. They don't spend much time actually feeding at these sites, instead just standing around, or squatting in a peculiar way, sitting back on their 'heels' with their lower legs stretched out in front of them.


Though quiet most of the time, marabous are actually capable of uttering a number of different sounds, these mostly heard at their breeding colonies. Their calls include bellowing noises, sighs, groans, and croaks. They also rattle their bills, and their wing feathers create squeaks and whistles as they fly. They breed gregariously, building large platform nests from twigs and sticks, situating them in trees, even right on top of trees with dense crowns, or on cliffs. A suitable location will host many marabou couples. The male takes the job of gathering the sticks, bringing them to the female who actually builds the nest. The clutch varies from a single egg to four eggs, two or three being typical. Both sexes incubate the eggs, which hatch after about a month. Both parents feed the young storkling. It leaves the nest at the age of three months or a little bit more. It is still dependent on its parents for another four months or so.


The marabou is unique in Africa, but two similar, related species occur in Asia, namely the Greater Adjutant, Leptoptilos dubius, and the Lesser Adjutant, Leptoptilos javanicus. In prehistory, several other species in the same genus occurred in Africa and Asia (and perhaps one in South America as well), some of which were much larger than the living species. One giant species occurring on the southeast Asian islands including the island of Flores, has even been speculated to occasionally feed on the tiny, primitive humans that lived there, Homo floresiensis, which some people have suggested we should name hobbits. There is still controversy around these little human specimens, and the idea of the giant storks feeding on them is similarly controversial.


Apart from marabous, it is interesting that several other stork species of the world, which feed on little or no carrion, also have bare faces, heads or necks, so this seems to be a trend in the family. Marabous, though rare over most of South Africa, are abundant in the far north, and in much of the rest of Africa, and are therefore not in current danger of extinction. They may, though, suffer from improvements in hygiene and sanitation around human villages and settlements, losing access to offal and rubbish. They have been persecuted in the past for the soft, fluffy white feathers they have below their tails, which were used for decorating feminine clothes and hats. This trimming, also called marabou or marabout, takes dye well and can substitute for fur. Today 'fake' marabou is made from turkey feathers.