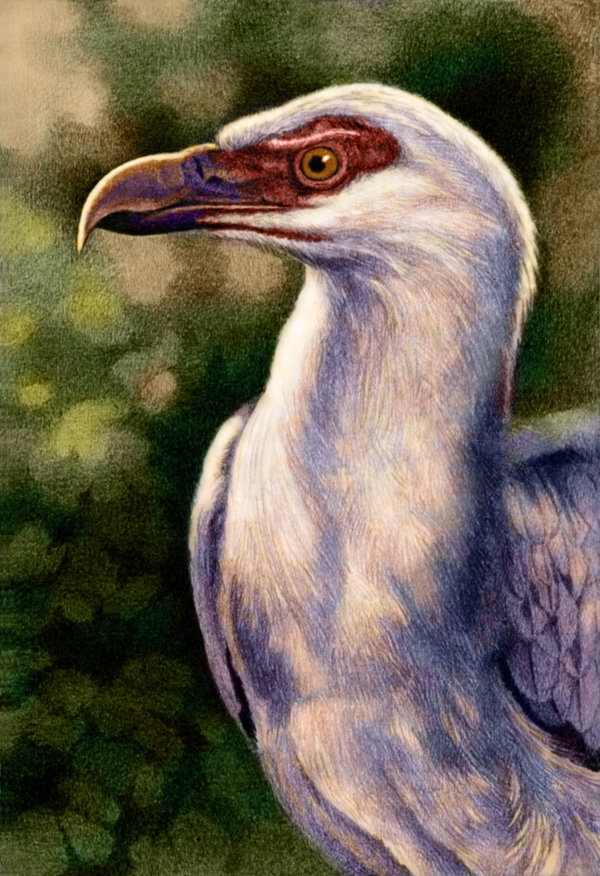 On with the vultures! Here you have one of South Africa's rarest bird species, the Palm-Nut Vulture, Gypohierax angolensis. The scientific name means 'Angolan vulture-hawk. The Angola part is not fitting since this vulture occurs over most of equatorial and tropical Africa, but the 'vulture-hawk' part is spot on. You can see that is has a most aquiline face, with a neatly feathered head, only having a bit of bare skin around its eye. It is not yet clear whether this is a vulture or an eagle; some experts consider it to be closely related to fish eagles (leading to its alternative name, the Vulturine Fish Eagle), but it also might be a close relative of true vultures, specifically the Egyptian and Bearded Vultures. I am proud to say that I've seen this species in the wild, at a vulture restaurant close to Polokwane. A single bird has been hanging around for many years; it is way out of its range, since in my country the species almost exclusively occurs in the extreme northeastern part of Kwazulu-Natal. Adult birds are easily recognized if seen well: they are white apart from black flight feathers in the wing and tail, with the bare pinkish face. Juveniles are brown, and can be confused with other vultures and eagles; its bare face distinguishes it from most eagles, and the bill is stouter than those of the other small vultures, the Egyptian and Hooded.

The palm-nut vulture has perhaps the strangest diet of any bird of prey. It feeds mainly on the fruit of palm trees! In equatorial Africa, it prefers the fruit of the Oil Palm, Elaeis guineensis. This palm tree doesn't occur in South Africa, but what we have in north-eastern Kwazulu-Natal, is the Kosi (Raffia) Palm, Raphia australis. Not only does this huge palm supply the vultures with food, it also furnishes humans with building materials. It has some of the largest leaves of any plant, reaching 18 m/60' in length! The leaf stalk and midrib are used for making houses and rafts, and the fibrous leaflets are used for thatching.


The oil palms of the equatorial rainforests of Africa are valuable to this vulture, but also to humans – and that is causing problems. The fruit of this palm yields an oil that is affordable and tremendously versatile, being put in products from soaps to a large variety of foods. Today in much of the tropics, people are destroying pristine tropical rainforests with all of the plant and animal diversity that they harbour, to make way for oil palm plantations. It is a truly catastrophic situation, worst of all in South-East Asia. It is not the fault of the palm trees, since they are indeed amazingly useful; it is a problem for countries where money trumps conservation. Vast amounts of money can be made from oil palm plantations, while intact tropical rainforests don't pay off so quickly and clearly. It just illustrates that us humans need to get our priorities straight. Some people might make quick money from the palm trees now, but the planet's loss of biodiversity and ecological integrity will impoverish many generations of future humans.


But in equatorial Africa, oil palms grow wild, along with many other rainforest trees, and are used by this vulture and many other species for their richly nutritious fruit. The vultures enter commercial oil palm plantations also, but don't consume so many fruits that they're persecuted by farmers. Raffia palms occur more sparsely, and their fruit is rather thinly fleshy, but still enough for the vultures. They often perch and also nest in these huge-leaved palms. In South Africa, the Kosi palm benefited from people; being a useful species, it's been planted in Mtunzini, somewhat further south than its main range in Maputaland, and the vultures followed. We can really help the vultures by planting yet more of these stately palm trees. They only grow in a hot, humid climate on swampy ground. They have special roots emerging from the soil surface to help them 'breathe' in the waterlogged soil. They also flower towards the end of their lives; after mass flowering and production of fruit, the palm tree dies and falls over, scattering its seeds and making way for a new generation.


Palm-nut vultures pick the fruits off the large bunches in which they grow; they hold each fruit down with a foot, and then strip off and swallow the husk, discarding the kernels. Although fond of palm fruits, the vulture does also eat other items. Other plant items in its diet include grains and the seeds of some trees. The one we have in Polokwane scavenges off pig carcasses like the other vultures, and the species can survive on a meat diet in captivity. It's been recorded catching lizards, birds and rodents. It eats living and dead fish, and also crabs, insects and snails. The latter include the giant African land snails, which can reach a length of about a foot and a pound in weight. The vultures crack the shell at the side and extract the meaty body of the snail. Sometimes they rob other birds of prey of their catches. They also follow fishermen in their canoes to scavenge the scraps they throw overboard.


Palm-nut vultures are more vocal than other vultures, and in this, too, resemble fishing eagles. They make barking, cawing, growling and even quacking sounds! In display flights they make a guttural sound my bird-of-prey book renders into human language as pruk-kurrrr. They also hiss and whistle during courtship. The couple greet and mate while giving a cawing kwuk-kwuk-kwuk. They threaten a human intruder at their nest with a series of barks and growls. The chick begs food from its parents with a plaintive cry.


Only a few palm-nut vultures are known to breed in South Africa. They nest in the big Kosi palms, building a bulky platform of sticks amidst the leaves near the top of the palm. Elsewhere in Africa, they nest in other kinds of tree as well, including baobabs and tree euphorbias. The nest is lined with grass and other fibrous matter, including dung. The same nest may be used for many years. Sometimes weaver birds build their nests close to those of the vultures.


Like other birds of prey, palm-nut vultures are monogamous. The birds court each other by joining in high soaring flights, during which they perform tricks like fast dives and somersaults. The breeding season starts in late winter to early spring. They typically lay just a single egg. The chick hatches when the palms are in fruit, since that is what its parents mainly feed it. They do bring it animal food too, such as birds, small mammals or large snails. The chick fledges at about three months' age, and is fed by the parents for another month or so, but quickly learns how to find and consume palm fruits. It reaches adulthood in three to four years. Young birds may wander very far away in search of their own territories; apart from the resident birds in northeastern Kwazulu-Natal, stragglers have been recorded over much of the country.


Because this vulture is less reliant on carrion, it is not as threatened by poisons and environmental chemicals as the others are. In suitable habitat, it can be quite common. In South Africa, it is completely dependent on the presence of Kosi palm trees, so if those are protected and propagated, it should be secure.