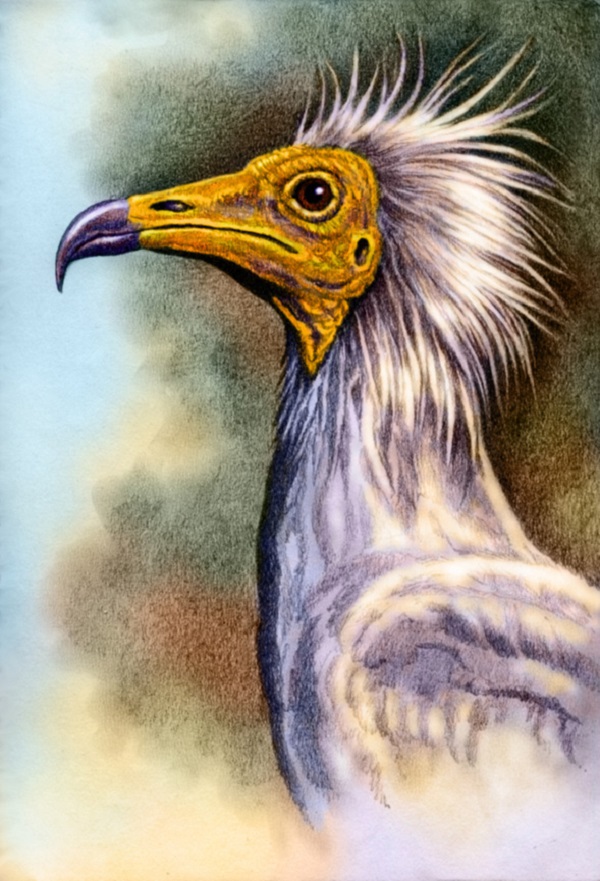 Next in my vulture series, I feature the Egyptian Vulture, Neophron percnopterus. Neophron was a character from Greek mythology changed into a vulture by Zeus, and the species name means 'blue-black wings', referring to this vulture's black wing feathers. It's also known as Pharao's Chicken. Egyptian vultures occur far more widely than Egypt, indeed from South Africa to North Africa, southern Europe and into central and southern Asia. They live in fairly dry and open country, desert or semi-desert. They need mountains and cliffs for breeding. In South Africa, the species is now extremely rare and perhaps extinct as a breeding bird.


In the Greek myth, Neophron's friend Aegypius had an affair with Neophron's mother Timandra. Neophron found out, and tricked Aegypius into sleeping with his own mother Bulis in a dark room. Bulis, finding out she'd slept with her own son, clawed his eyes out and killed herself. Aegypius prayed to Zeus for revenge. But as he was hardly innocent himself, Zeus transformed both him and Neophron into vultures. Today Aegypius is also used as a genus name for the Eurasian Black Vulture.

These vultures get their name from featuring in the culture of Egypt since thousands of years ago. They're portrayed in realistic tomb paintings but also became the hieroglyph for a glottal 'a' sound. Vultures were sacred, associated with the goddesses Isis, Mut and Nekhbet, and were protected by law. Consequently they became abundant in Ancient Egypt.


Egyptian vultures are some of the easiest birds to identify if seen clearly. Their bodies are covered in white feathers, that grow into a long crest on the backs of their necks. Sometimes their colour becomes more reddish or brownish as a result of getting stained by soil and dust. The long flight feathers on their wings are black. Their heads are naked, the skin bright yellow. Their faces 'flush' bright orange, due to sudden rush of blood, when they're excited. In flight, they show a wedge-shaped tail. As vultures go, they're fairly small, reaching a length of 65 cm/26", a wingspan of 175 cm/5'9", and a weight of a bit over 2.2 kg/5 lbs.

A celebrated habit of these birds is their novel way of gaining access to the content of ostrich eggs. These huge eggs have thick shells difficult to crack – an adult man may stand on one without breaking it. Egyptian vultures have learnt to open them! They seek out a pebble or small stone; picking it up in their slender bills, they then hurl it downward at the egg with as much force as they can muster. It typically takes several tries, but when the shell finally cracks, it is a feast for the bird. Sadly, sometimes other, larger vulture species stand nearby watching the process, and when the shell is cracked, chase the Egyptian vulture away and feast on the egg themselves! This kind of tool use has only been observed in Africa, and seems to be innate rather than being a learned behaviour.


It is perhaps this egg-breaking habit of the Egyptian vulture that contributed to its extinction in South Africa. The birds were most prevalent in what is now the Eastern Cape Province, and here as well there has for long been lucrative ostrich farming. The farmers did not at all like the way the vultures broke the eggs and deliberately shot and poisoned them.


Egyptian vultures also eat smaller – but still large – eggs like those of pelicans and flamingos. These they are able to pick up in their strong feet, flying up high and then dropping them to break on the ground. One was also seen lifting and dropping a monitor lizard to its death.


Otherwise, these are ordinary vultures. They spend much time soaring on thermals and updrafts, scanning for food with their keen eyes. Being so small, they typically have to wait around a carcass until the larger vultures cease feeding. They hang around flocks and herds, waiting for females giving birth, so they can gobble up the placentas. They're also one of the vulture species that have learnt to make use of humans. They frequent rubbish dumps, picking out edible scraps. They're also sometimes seen feeding on faeces, a habit that may not endear them to the witnessing humans, but that is fully in line with vultures role as nature's clean-up crew dealing with disgusting detritus.


In fact, they get some very valuable nutrition from the dung. Ungulate dung apparently contains carotenoid pigments, which give the vultures the deep yellow to orange coloration of their faces.


Sometimes, Egyptian vultures kill their own prey, mainly small mammals and birds. They will also not disdain invertebrates like termites, grasshoppers, beetles and their grubs, crabs and snails.


European populations of this vulture are migratory. Come winter, they move south, crossing the Sahara desert to the dry Sahel belt of Africa. Young vultures may remain in the Sahel for several years, only going back to Europe when they're of breeding age. In warmer regions, they are resident.


Their breeding behaviour is not that remarkable. Like most birds of prey, they form monogamous couples. Couples fly and perform aerial acrobatics together. It seems the male has to keep a close watch on the female while she's receptive, as she would take a chance, if given, to copulate with other males. It sometimes even happens that a second male joins the couple, apparently tolerated by the 'real' mate, and helping with the breeding effort. They breed mostly on cliffs, their nests made from twigs and lined with soft material like animal wool or fur, or rags. They lay one to three eggs, two being quite typical. The chicks are fed by both parents; they fledge in 90 to 110 days but need parental care for a month or so longer. They matures slowly, gaining full adult plumage at about five years. Egyptian vultures have lived to the age of 37 years in captivity.

In South Africa, the Egyptian vulture's plight has been dismal. Once they were common in the dry Karoo region. They frequented villages and hung around farm homesteads, picking up scraps and bits of offal thrown out by the people. They also scavenged on the large game herds then found in the region. The coming of Europeans led to the game herds being eradicated. Better hygiene practiced among the humans, both farmers and villagers, meant less scraps and offal left for the birds. As I've said, they were sometimes deliberately shot and poisoned, but many also succumbed to poisoned carcasses left out for predators like jackals and caracals. Today the species is virtually gone from South Africa; the very few individuals sometimes seen likely are stragglers visiting from further north in Africa.


Worldwide, these vultures are on the wane. Poisons and pollutants play a large role. In India they're impacted by the veterinarian drug Diclofenac, which kills vultures that feed on the carcass of a cow or goat that's been treated with it. Vultures also absorb agricultural chemicals and pesticides that may poison them or impact their breeding. If they eat animals that have been shot, they may become poisoned from the lead. They collide with power lines or with the blades of wind turbines. The most seriously threatened of the Egyptian vultures are the ones in the Canary Islands, which constitute a unique sub-species; only about 130 of them are left! Overall the species needs multiple initiatives to safeguard it. Vulture restaurants, where clean and safe food is left out for them, can help, but they also need a serious reduction in poisons and harmful chemicals where they occur.