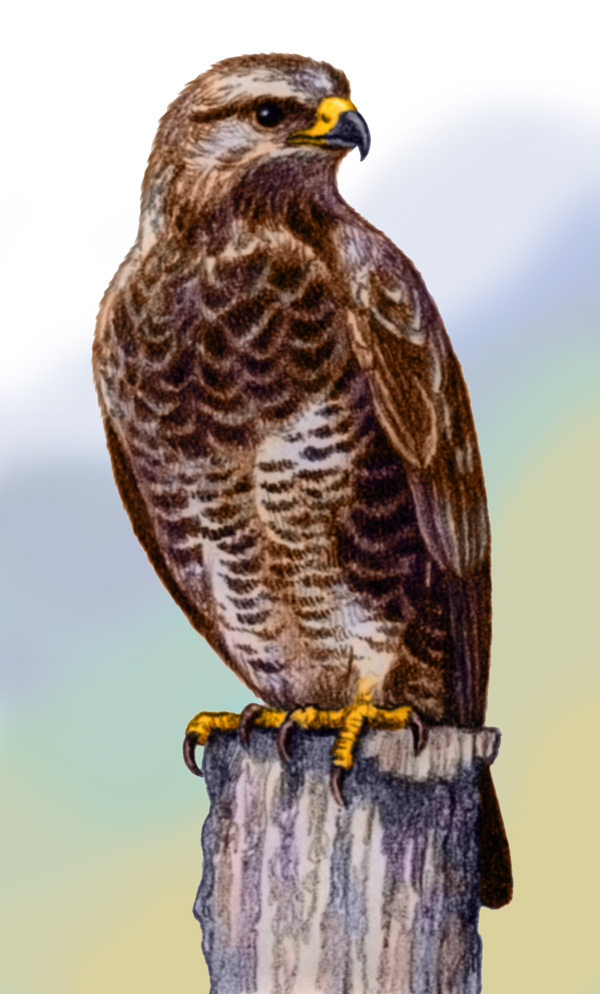 Here we have an interesting name-situation! This bird, scientific name Buteo buteo, which is found all over Asia, Europe and Africa, is called a Buzzard where it occurs; in America, however, calling it a buzzard would elicit some funny looks. There, 'buzzard' is the name they use for what we in the Old World call a 'vulture'. The vultures of the New World are actually not quite the same thing we have in the Old World … a matter for another article … but they're nowhere close to buzzards. In America, what we call a 'buzzard' would be called a 'hawk' (but then again, not all American hawks are buzzards). Latin for buzzard is 'buteo'. In Afrikaans we call this one a 'Jakkalsvoël' or 'Jackal-bird' on account of its jackal-like call. Our buzzards are actually sturdy, medium-sized members of the hawk-and-eagle family.


Amongst the hawks and eagles, the buzzards have their own subfamily, the Buteoninae. This subfamily is most diverse in the Americas, despite having many old-world members. The common buzzard is a very close relative of the American Red-tailed Hawk, Buteo jamaicensis.

Buzzards are amazing migrants. Actually, not all of them are … common buzzards found in Britain and much of Europe don't move much, or at all, since the winters there are mild and the buzzards can still find food like voles amidst the snow, to tide them over. The ones we get in South Africa come from places with harsher winters: Finland, the Black Sea region, eastward to central Siberia, Tien Shan in China, and Mongolia. Their wings are both proportionally long and broad, giving them a low wing loading, that is to say weight-to-surface-area ratio. Buzzards likely make use of air movements at high altitude when on migration, to move them large distances with minimal effort. They start arriving in South Africa in September; they depart again in March or April. Sometimes found in large concentrations while they migrate – as many as 460 000 having been recorded moving through Israel a season – they partition themselves out onto widely dispersed territories once they arrive here.


This used to be called a 'Steppe Buzzard' here in South Africa, because the ones we have originate from the Asian steppes. Over here, it can be found in a variety of habitats, but seems to favour open country. Buzzards can be seen perched on telephone poles all over the country, during spring and summer. They look quite relaxed. They're probably enjoying the respite from all the flying. They even moult and replace their flight feathers while on this southern 'vacation'. From their lofty perches, they scan the ground with their eagle-eyes for any movements betraying prey. They feed largely on rodents, but also small lizards and snakes, frogs, birds, and insects. Sometimes they stand or walk around on the ground, other times they will soar on updrafts and thermals. Buzzards have to a degree benefited from human activity. The clearing of bushland for agriculture has given them a lot of favourable habitat, and they prey on a variety of animals that can become agricultural pests. As such, they play a very valuable role and should be appreciated by farmers. This is why the species is included in the project I'm working on, to educate rural people in Venda about mammalian and avian predators.


These buzzards don't breed in South Africa. They breed in the summer in the northern hemisphere. Males and females mate for life, and fly together, performing flight tricks and aerobatics, to strengthen their pair bonds. They build stick nests, mostly in trees, but sometimes on cliffs or rock ledges, and rarely even on the ground. Buzzard couples will often have more than one nest in their territory. The female lays two to six eggs, which is a lot for an eagle. Unlike some large eagles, there is no aggression between the chicks, but the youngest and smallest are likely to die if there's not enough food available. The chicks hatch out downy, getting their first true feathers at 12-15 days of age. They fledge at around 50 days. Female chicks are much heavier than males at fledging. Siblings from a single clutch tend to stay together for a while after leaving the nest, but disband at the age of about a year. By the age of two years, the birds are ready to start challenging other adult birds to obtain their own territories.


This is one of the safest raptor species of the world. It is abundant, widespread, and able to peacefully and profitably co-exist with humans. It is even more tolerant of agricultural poisons than most other raptors. The global population likely numbers more than two million birds.