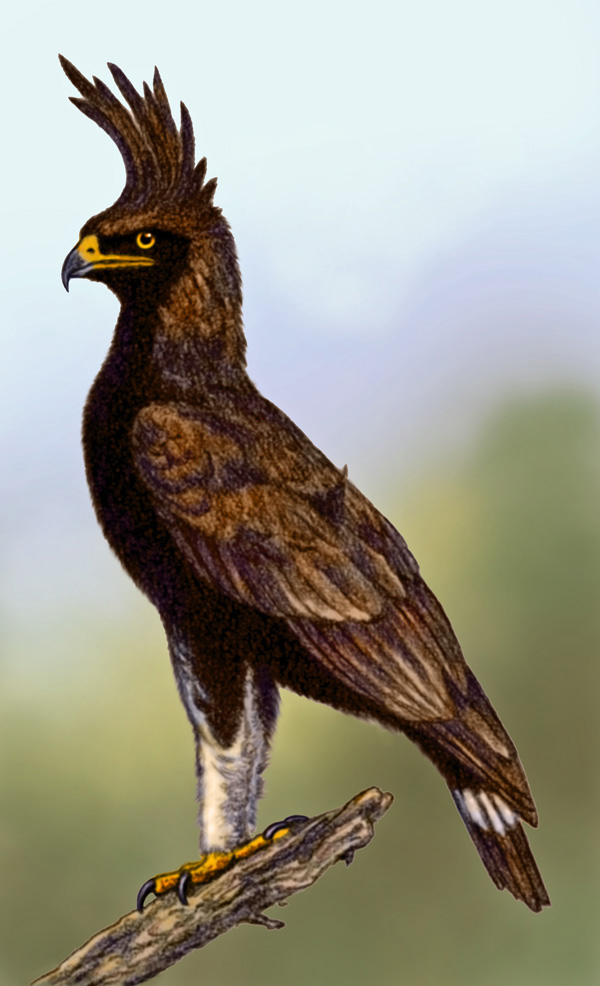 This is an illustration I created for the Venda carnivore project I'm working on. It shows a Long-crested Eagle, Lophaetus occipitalis. The scientific name means 'occipital-crested eagle'. With its long, floppy featherstyle, this is one of the easiest of South African eagles to identify if seen well. On the road east from my home town of Polokwane, on the stretch from Haenertzburg to Tzaneen, you're almost guaranteed to see at least one if you keep an eye on the telephone poles beside the road. There was one that hung around Polokwane itself for a while; I took my mom to see it in the Bird Sanctuary, where it allowed us some great glimpses, both perched and in flight. Sitting it appears all-dark, except for (mostly in the male) fluffy white leggings or 'trousers' as you can see in my illustration. In flight it shows large, white panels in its wings, and a white-barred tail.


Long-crested eagles occur over most of sub-Saharan Africa. They are only absent from the driest desert regions, and for some reason, from most of Angola, despite that country having lots of suitable habitat. Though not rare, it is nowhere very common, and thus always something nice to see. It likes well-watered regions with trees for it to perch and breed in as well as grassland or marshy places where it hunts. It eats almost nothing but rodents, and in particular the chunky vlei (marsh) rats. Its hunting method is sitting still on a high perch – benefiting much from telephone poles – and scanning the ground with its keen yellow eyes as the wind blows its crest this way and that. It swoops down and grabs its prey in its talons. Most rodents are gulped down whole. Minor items in its diet include birds up to the size of partridges, insects, crabs, lizards, snakes, and occasionally even fish. It will spend some time hunting from one perch, and then move off to another, so covering a large terrain over the course of each day. 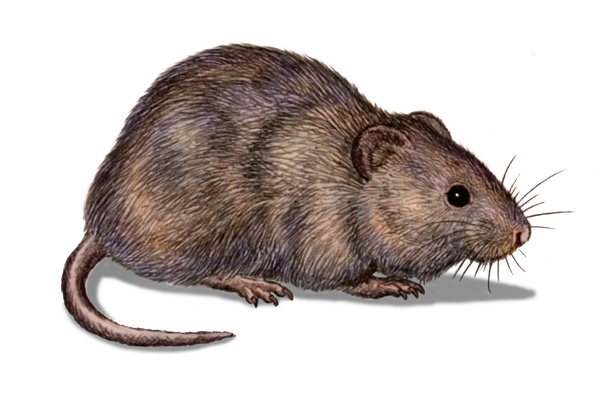 These eagles have to some degree benefited from human alterations to the landscape. I've mentioned telephone poles; they also make use of trees planted in otherwise tree-deficient regions. In particular, they enjoy nesting in Eucalypt trees. These trees grow naturally in Australia, but many have been planted in South Africa. They grow rapidly, straight and tall, indeed, taller than any of our native trees. I've featured one that stands over 80 m in an article here; it is the tallest planted tree in the world, and a contender with a tree growing on Kilimanjaro for the title of the tallest tree in Africa. Long-crested eagles often nest high up in eucalypt trees, in one case at a height of 45m/150'. They place their nests on a horizontal branch close to the main trunk. The very smooth bark of eucalypt trees mean that few predators will be able to climb up to reach them. They also place their nests well-concealed by foliage from above. Sited thus, they are very safe places for the vulnerable chicks.


Unusual among birds, long-crested eagles don't seem to have a particular breeding season. This is likely because they prefer moist regions with vegetation growing, and rodents active, throughout the year. Males and females pair up for life, and cement their relationships with courtship displays. One kind of display flight is an undulating dive, while calling; another is a level flight but rocking the body from side to side while half-closing the wings. Sometimes the male and female simply fly or soar together for a while. They mate in a tree close to the nest, calling loudly. The call is a simple, high-pitched scream, or a more rapid series of 'kik-kik-kik-kik-kee' sounds.


The nest is made of sticks, and the eagles will keep it lined with green foliage throughout the season. Most of the time the female will lay two eggs, occasionally only one. The female does most of the incubating, while the male does the duty of bringing her food. If two chicks hatch, they are unusual among large eagles for not fighting with each other. Thus if there's enough food, the female can raise both chicks; indeed, a really good rodent season may enable her to raise two broods in one year. She and her mate feed the chicks on rodents mostly brought to the nest in their crops, rather than in their claws, and regurgitated for the chicks. When the chicks are very small, the parents tear prey items up into smaller bits, but larger chicks, like their parents, swallow prey animals whole. In addition to renewing the fresh green foliage lining the nest, the parents also remove the chicks' droppings. Chicks fly at the age of 53 to 58 days, but stay close to their parents for another three or four months, as they learn to hunt and take care of themselves.


Being dependent on rodents, long-crested eagles lead somewhat tumultuous lives. Rodents breed rapidly, responding quickly to changes in rainfall and vegetation growth. In rodent boom years, the eagles do very well, and breeding is successful. Eagles may move out from their regular haunts into regions that are usually too dry for them. Young eagles often wander and may be seen in regions with quite atypical habitat. Overall, this eagle does not seem to be in danger of extinction, though it occurs at fairly low densities. Specialising on rodents, it is not persecuted by farmers. It does not like too much human activity in its hunting grounds, and may be vulnerable to agricultural pesticides and chemicals.