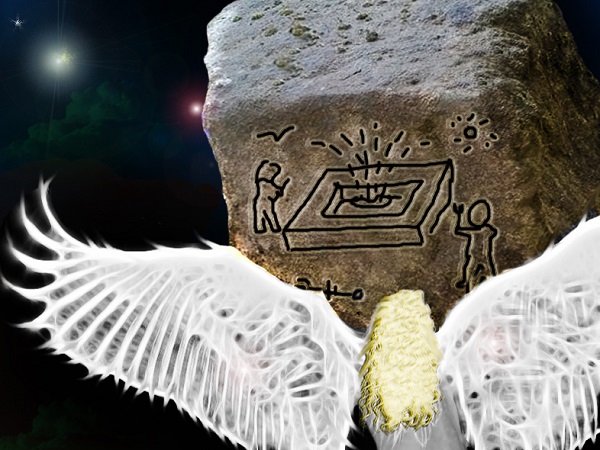 'And yet here it is!' the elderly professor bent down to touch the stones, cursing loudly at his creaking knees and his inability to see anything close up nowadays without his spectacles.

His fingers traced over the faint lines, petroglyphs, who knows how ancient they would prove to be? His first estimates were ten to twelve thousand years old, but that was a mere guess.

Some of the earliest examples were four times that ancient, more recent discoveries proved to be only imitations, Victorian follies, carved into estates to stimulate interest and conversations in the Grand Tours of the social elite.

But these, he traced the lines again, these were something different, something truly ancient!

He smiled as his joints creaked loudly, echoing in the cavern, 'If I'm correct Simon, my young friend, aching bones will soon be just a curious memory!'

Simon busied himself with the camera equipment, keen to capture each and every line of the 'glyph, after all, it wasn't every day you got to photograph the blueprints to the Fountain of Youth!

'But that's just, well it's just impossible!' Remiel was becoming irritated with the task.

'And yet, here it is!' Suchlach beamed, carefully carving the final delicate lines into the designs.

'He won't be happy with that bit...way too advanced for His Plan.'

'Oh, for Dad's sake! Stop being such a misery guts!'

Keen to make his point, Remiel reached out and plucked a rock out of the nothingness, holding it up to his Brother.

'Ok, explain to me how this'll work?'

'Easy! Eight railway sleepers, a pond liner and a solar-powered pump, a weekend's work….once we know what a weekend is, that is!' He stretched out his wings, basking in the light of the newly-engineered stars. (Dad had done a top-notch job on that one).

'So, when this, erm, planet thingy is ready, and the project begins…?'

'When all that happens, what, five or six days from now? Our teeny tiny bit of the Grand Design begins, yes?'

'So, here's your Garden, welcome to existence, little monkeys...oh and my Brother and I have designed a really cool water feature for you, just wait several millennia until railways are invented, then another couple of hundred years for solar-powered electric pumps, plant a few herbs and flowers, brilliant! Oh, and there'll be a thing called barbeques...use the tomatoes, herbs etc, and you can have some jerk bloody chicken with a nice salad in the summer!'

'Sounds Heavenly!' With a final flourish, a brilliant white feather etched his sigil under the design.

'You have no idea just how long these monkeys will have to wait for a nice summer's day, do you?'