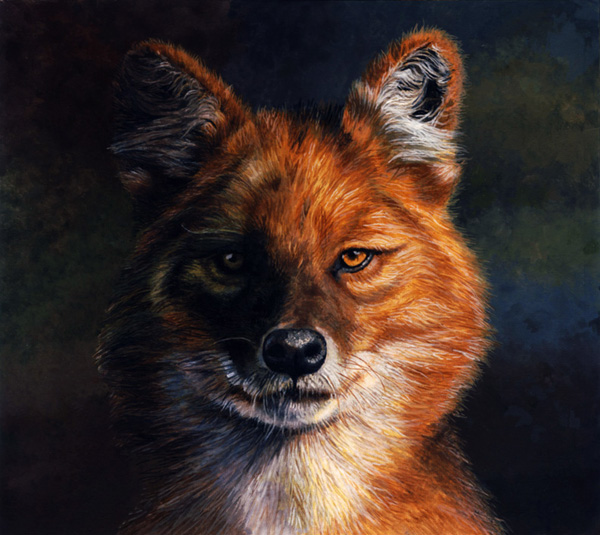 The Dhole, Cuon alpinus, is the wild, hunting dog of Asia. It actually used to be extremely widely distributed, occurring in Europe, practically all of Asia, and North America from Alaska down to Mexico. But this was quite a time ago, during or in between the ice ages. Recently it's been more typical of eastern Asia, from Siberia southwards. Currently it is mainly restricted to central and south-Eastern Asia, with substantial populations in India. This painting is of a specific animal in a zoo in The Netherlands. The species is also called the Asian or Indian wild dog, the whistling dog, red dog or mountain wolf. The scientific name means, more or less, mountain dog.


Compared to African hunting dogs, dholes are smaller and shorter-legged. Adult males weigh 15-21 kg/33-46 lbs, while females weigh 10-17 kg/22-37 lbs. They have russet-red coats , shorter and sparser in summer, longer and thicker in winter, keeping them warm and comfy in sub-arctic and high montane regions. But they also occur in hot, tropical forests. They seem to be successful generalists, but prefer hunting in wooded areas rather than on vast, open plains. Dholes occur in clans rather than packs – this means the group they socialize in is not always the pack that goes hunting together. The clan may break up into several different packs when it's time to hunt. Clans may number as many as forty members, but around five to twelve is more typical.


Within a clan, there's not a strict dominance hierarchy, nor are clans highly territorial. Dholes don't engage in territory-marking urination or defecation activities like other wild dogs and wolves do. They cooperate closely in their packs, though, targeting medium to large mammals up to the size of wild deer and buffalo. They've been recorded bringing down an elephant calf, at great cost though, the mother having killed several of the pack. Dholes run down their target, being able to sustain their speed over a long distance even though most chases are of the order of 500 m/yards or less. The prey is brought down being bitten in the run; when it is overcome, it is quickly disembowelled. A large prey animal can take as many as 15 minutes to kill. They'll sometimes hunt small animals like langur monkeys or even rodents. After each kill, the young animals are allowed to eat first. Pack members will return to mothers with puppies, and regurgitate some meat for them. Dholes can eat a significant amount of plant food, such as leaves, grass and fruit, in addition to their meat.

The name 'whistling dog' comes from the whistling 'coo-coo' calls that dholes utter apparently to keep a clan in contact in dense bush. They have many other vocalisations: screams, whines, growls, chatters and yaps. In addition, dholes use body language with each other: they make faces by pouting or pulling back the lips, and their body orientation may include the bushy tail lifted or lowered; they can also raise their fur. Different body 'expressions' can convey submissiveness, playfulness, aggression or fear. Before they go on a hunt, they nuzzle and rub against each other and also mount each other, whether of the same or different sexes.

Doles excavate sometimes elaborate dens to rest in. These may be taken over from hyenas or porcupines, but the dholes will usually do work on them, sometimes over many generations, until they are large systems of chambers interconnected by tunnels. These dens are used mainly by females with puppies. A clan may have more than one breeding female, and these may have their puppies together in the same den. A litter consists of four to six pups. They suckle for about two months. They're weaned by the clan starting to feed them regurgitated meat, and at six months or so, they start going along on hunts with the adults. In captivity, dholes can live for 16 years.

The dog family includes various wild dogs, wolves, jackals and foxes. Dholes are quite closely related to true dogs, wolves and jackals of the genus Canis. Nevertheless, they differ enough in certain features to warrant their own genus, Cuon. In particular they have cheek teeth reduced in number and complexity; their upper molars have just a single, sharp cusp instead of several, making them better at slicing meat.


Analysis of the genes of wild dogs, jackals and wolves, indicate that dholes split off from the others between 2 and 3 million years ago. The first members of the dhole genus are known from China; dholes proper emerged in the middle Pleistocene. Late-Pleistocene dholes were bigger than the present-day animals. They seem to be rather close to the African hunting dogs; it is possible that at some stage, their ancestors interbred and exchanged some genes with each other. This is strange since in the present day and also for all of their known history, the two species have occurred far apart; dholes have never been known in Africa, and our hunting dogs have never been known outside of the continent. But it is possible that they might have once shared their range in north Africa or in the middle East.


Sad to say, today these dogs are threatened with extinction. From abundance and presence in almost the whole of the northern hemisphere, they've dwindled to isolated packs occurring just here and there. It's estimated only 2 500 or so wild animals remain, most of them in India. Camera traps give evidence of their continued occurrence in various places, but many present populations are too small and scattered to really be viable. Dholes contend with humans, being thought to be killers of livestock though they only rarely target domestic animals. They are victims of poison and traps. They also suffer from their hunting ranges contracting as more and more people expand their settlements and farms, and from the loss of prey animals. They contend with other wild predators such as bears, leopards and tigers; they can be displaced or even killed by these. Dholes also are susceptible to the same diseases as domestic dogs, and are sometimes infected by them. At present, they are conserved by laws in India and some other countries, and they do occur in some protected areas. However, they're in need of our ongoing help and monitoring. It would be a sad day if these hunting dogs of Asia are not with us anymore.