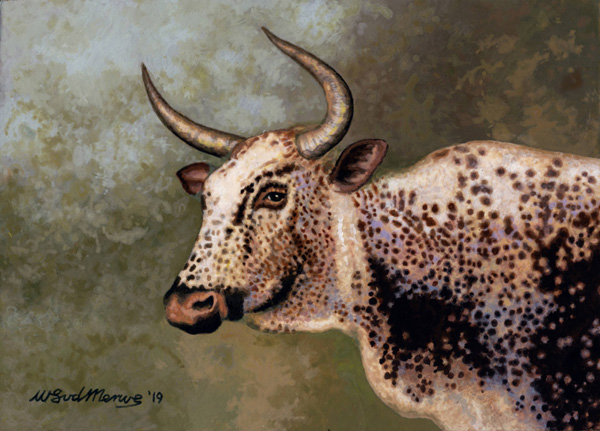 A bit of a change! The animals, whether prehistoric or contemporary, that I've been dealing with here have all been 'wild', or 'natural' species, in that humans had no hand in their evolution. But human-influenced animals are actually dominant today. Of all large mammals that live on the planet at present, the majority are either us humans ourselves (since we are indeed among the physically largest of mammals) and our domesticated animals. Many scientists neglect human-created breeds, but this in my view is a mistake, since these animals actually among themselves represent a significant chunk of biodiversity. Even the breeds we create are not really solely of our creation: we merely select and propagate interesting features that arise among our domestic animals through natural processes of variation and mutation. And the end-result of these processes together with human selection still lead to animals that are well-adapted to their environments. Witness the Nguni Cattle.


'Nguni' signifies a certain group of people living mainly in South Africa, encompassing a few related languages and cultures, most notably the Zulu. These are people who have migrated from northern and eastern Africa down towards the south, bringing their cattle with them. These cattle have features both of typical European cattle, Bos taurus, which are descendants of the main race of the Aurochs, Bos primigenius, and also of the Indian cattle or Zebu, Bos indicus, a descendant of the south-east Asian race of the Aurochs. This Asian/European mixture likely entered Africa about 8 000 years ago. The Asian influence is seen in the shoulder-humps of Nguni cattle bulls; this hump is both muscle, helping to lift the heavy head, and fat, a store that can last a bull through a period of famine. This feature indeed serves Nguni cattle well, since they live in regions where drought and famine occur frequently. These cattle are hardy in numerous ways, able to deal with extreme heat as well as with sub-zero temperatures, and with rough terrain. They're also quite resistant to many diseases. Cows become fertile early, give birth with ease, and are long-lived. All in all the breed is eminently suited to the grassland and savannah regions that are so prevalent in Africa.


Outwardly, the chief distinguishing characteristic of Nguni cattle is their mottled hides. No two Ngunis look alike. The mottling typically includes large patches as well as fine speckling, and is usually yellowish, reddish, brown or black on a lighter background. The snouts are usually dark. The smooth, sleek hides are difficult for ticks to attach to. The animals are medium-sized, the cows reaching a weight of 880 lbs/400 kg and the bulls 1320 lbs/600 kg. Both sexes have horns, but those of the bulls are usually stouter and more widely spreading. They curve gracefully outward and upward. These allow them to deal with most of the predators they're likely to face. They're cattle eminently capable of taking care of themselves. 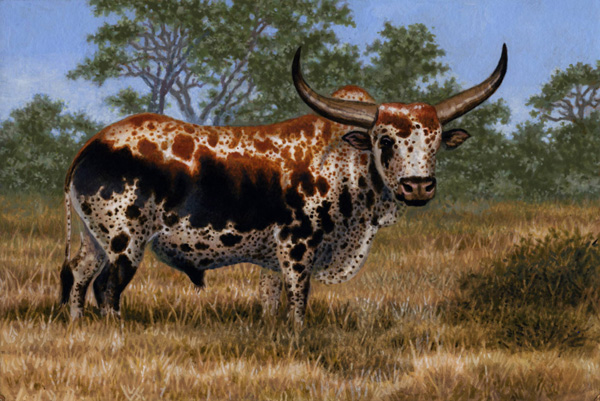 In South Africa, these cattle thus need little management. Cattle are owned either by kings, chiefs or wealthy individuals, or communally by villages or tribes. They are traditionally herded by young boys, but often roam where they wish. They climb hills and mountains with ease. Cattle are extremely important in local South African society. They've always been the main component of a bride's dowry, and beautiful, healthy cattle are the visible outward signs of someone's wealth. A big goal of traditional warfare has been to capture the enemy's cattle, and cattle raids are also what first brought European and African folks in conflict here in South Africa in the eighteenth and nineteenth centuries. Cattle was also used in reconciliations, though; the Boers often gained the trust of local chiefs by returning to them cattle that had been stolen by rival groups.


Today, these are still very important beasts with economic, political, cultural and spiritual value. In the Zulu language, cattle and their characteristics are given poetic names and descriptions. For instance, a finely speckled coat is called 'eggs of the lark', an animal with a white flank patch which is revealed as it walks is compared to a hornbill taking flight and revealing its white wing feathers, and the upward-pointing horns of a bull are said to be stabbing the rain. The Zulu king Shaka had his warriors make their shields from the hides, and different regiments used hides with different colours and decorations. His imperial guard had shields of unique, pure white individuals.


From an environmental perspective, farming with the Ngunis is eco-friendly because they don't need chemicals like dips, antibiotics and hormones, and can thrive in essentially wild environments that are shared with many other critters. They give good yields of meat and milk, and their fertility means that each cow can produce ten or more calves in her lifetime. Compared with sheep and goats, they are less destructive of natural vegetation. There are projects afoot in South Africa to encourage and aid especially upcoming black farmers to farm with these hardy beasts.


From my own perspective, this breed should be considered a unit of biodiversity that should be conserved. The animals can easily be turned into fully wild ones, able to integrate into natural ecosystems and food webs, and thus valuable for future re-wilding of the planet and ecological restoration and re-diversification, in Africa as well as elsewhere.