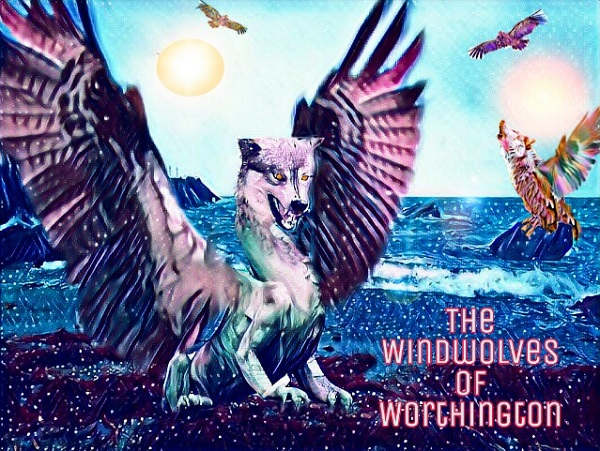 'The Old Cap was still swinging his knife, as the Windwolf plunged towards the icy waves. The Cap fought hard, even though his body was broken, smashed and clamped between the dreadful teeth lining the Howler’s beak. A final strike caught the beast in his eye, howling in rage, it opened its jaws and dropped the Cap into the sea!'

She paused to let her words sink in. The children sat, open mouthed, eager to hear the final words, although each and every one of them knew how the Cap’s Tale ended.

'And so, on that bleak morning, fell the Last of the First, the Old Cap was gone, leaving us to sail on alone,' another pause to wipe away a tear and smile a reassuring smile to her class, 'So when the Westerlies blow, and the Windwolves howl, do not fear little ones, ride the winds and race the wolves, because we are all the Crew of the Old Cap and the Defenders of His Script! Class dismissed.'

She gently closed the ancient plastic pages of the book, fingers tracing the faint etched letters.

The child ran through the rain and sea spray, salt burning her eyes, hands clamped over her ears in a futile, childish, attempt to block out the howling.

Even over the thunder of the storm, the crashing waves, and her own deafening heartbeat, she could hear the windwolves circling overhead, searching for a downdraught, waiting to swoop and carry her away into the black night.

Ahead, glimpsed in a flash of lightning, the rocky outcrop that bordered the pathway home. Dim yellow lights flickered above, beacons in the driving rain, promising safety, tantalisingly close.

But the shale path offered no cover, easy prey for the circling, howling pack. Home would have to wait.

She reached the rocks and squeezed her tiny wet frame into the gap between two boulders, a favourite hiding place during summer games with her friends, now the only hope she had of ever seeing them again.

She looked out through the rough stone, dark figures filling the sky, vast silhouettes against the moons.

Hot fetid breath made her eyes sting more than the salt water, a huge eye, glowing orange, filled the gap as the Alpha landed on the rocks.

Talons crumbling the stone as it sought to find a way in to claim the meat. Leathery wings blocked out the storm, rough grey fur poking through rock, scratching the stone almost as loudly as the talons.

Holding her breath, she heard the others landing around her, pebbles scrunching under the weight, footsteps merging to encircle her hideaway.

She increased the pressure of her palms on her ears, as the beasts howled to each other, sniffing out the soft meat sobbing in the blackness.

Hot, sweet juices ran down his chin, the fat glistening in his beard as he chewed, spitting meat in his enthusiasm to tell the tale.

The inn was hushed as the patrons leaned forward, eager for news from the Outer Isles.

The sailor gulped down ale, emptying the tankard, pausing pointedly, the barkeep rushing to refill his cup, in order the tale be continued.

The tankard was lifted and the man nodded his thanks.

'Never have I seen such a cargo! The decks were red with blood, I tell you!' Another bite into the roasted crawler leg, wiping away at the juices he continued, 'For three nights they came. A pack like no other, nothing like it seen since the Old Cap's time!'

The crew around the bar unconsciously crossed themselves at the reference.

'Our guns ran out of ammo, fired til they glowed, but still the windwolves swarmed. Howler after howler we killed, bodies crashing into the keep, but still, more, always more. The skies were filled with wings it seemed. Many men perished in the onslaught, dozens more carried out to the eyries that surround the Isles!'

The bosun's audiences gasped, each trying to picture such a scene, pleased to be many, many clicks away from such horrors.

'On the fourth day, swords and pikes replaced the empty weapons. We fought well, they fought like the devils they be, till, finally, the winds came. As any seafarer here can vouch, nothing can ride the sandstorms down there!'

'Not even the Alpha could fly in the face of that hoolie! The pack turned and raced the winds, some outrunning the sands, back to gorge on our shipmates on the eyries, no doubt? Others, forced to land on beaches and decks were set about, but let me tell you, my friends, even grounded, a windwolf is no easy kill with just a blade!'

He held up his dinner, the meat impaled on his knife, his eyes far away, reliving the fight it seemed.

'On the fifth day, as the Twins rose, and light returned to the Outer Isles, we counted our losses and counted our blessings too. All around the keep at Leather Rock lay the carcasses of the beasts. Enough to keep the tanners and butchers busy for the next week or so!'

His greasy fingers hooked into the collar of his new jacket, holding out the fine leather for all to see.

'I do believe every man, woman, and child on the Isles has a new winter coat by now!'

The barroom erupted into good natured laughter, but each wondered if the bosun was just spinning a yarn.

'Dawn tomorrow' he glanced at the clock above the bar, 'Dawn…today and you, my doubting mates, shall see!'

'My ship is berthed and ready for unloading, eighty-six pelts, a half-hold of meat, salted and cured, and enough teeth to make all your women each a very fine necklace indeed! Bidding will start at seven bells; til then my friends, let us drink and pay our respects to those we have lost and pray each and every cursed howler meets the same fate as my coat!'

Joel pulled on the line. The nets were heavy this morning.

The small fishing boat bobbed lazily on the calm sea, last night's storm had passed, and the waters were as glass.

He paused to wipe the sweat from his eyes, the Twins heating his flesh as they rose above the horizon.

He returned his attention to his catch, mainly Blue Crawlers, a dozen brightly-coloured Spannerheads and one King Fish, a good morning's catch.

Clearing the nets and recasting, Joel set the buoys and sat at the oars, urging the boat homewards.

A sudden shadow blocked the heat from his back, craning his neck into the cloudless sky, shielding his eyes, Joel gazed in awe at the blackness that was heading towards him. Mere minutes and they were upon him.

Thousands upon thousands of leathery wings beat overhead, the black cloud of windwolves headed westward, their howls deafening and their shadows chilling, as the enormous pack flew on towards the harbour.

In the twenty (terran) years since we arrived, we have never seen the like. The seasonal storms that we have become adjusted to weathering seem mild compared to the violence that this world has unleashed on our community.

The settlement has been forced to retreat to the hull of our ship, we have, so far, failed to contact the two groups stationed at Crawler Harbour and Spannerhead Beach.

Rescue teams have been deployed, and we should know their situation in three days time. Our thoughts and prayers are with them.

I also intend to send our last flightworthy shuttle to the outer islands later today. The crew have volunteered to undertake the hazardous flight to ascertain the fate of those in the south.

As my previous entries have explained, the inhabitants of the islands have long since declared themselves independent from our jurisdiction, and contact has, unfortunately, been scant over the intervening six years, barring infrequent trading voyages.

This said, I believe any decent Commander, indeed, any decent human being, would undertake even the most hazardous expedition to assist his fellow human beings on such an inhospitable planet.

Reports are also arriving from further coastal lookouts of some kind of unusual dark cloud approaching from the East.

Please Goddess, do not let it be another storm of the scale we faced last night.

Perhaps this is a natural cycle?

We, as newcomers, have yet to experience the long-term conditions of the planet. I hope that future generations may benefit from our sacrifices and may, in time, predict when these cataclysmic events will occur and can protect themselves from harm.

I will, of course update this log on the outcomes of events detailed above.

In the eyries, the queens slept.

Their cycle completed for another three decades, the pack spawned and sent out, howling and hungry, to ride the Great Storm winds.

Curled upon themselves in the vast caverns, the mothers slumbered, dreaming that their offspring would flourish and be well fed.