As promised in my previous article about the prehistoric cattle of Africa and Eurasia, here I have for you an article featuring species found in America, in particular, bison. While many bison species were found over much of the Earth in the past, only two species remain today: the American bison, Bison bison, and the European bison, Bison bonasus. These two species are actually both intimately related to the three bison I will feature here. This is indeed a unique situation for the prehistoric animals I've treated here thus far. All of them have gone truly and irrevocably extinct. But the three bison we'll discuss here, are not 'really' extinct: the Steppe Bison has some of its genes continuing in the European bison, while the Long-horned likely evolved into the Ancient Bison, which then evolved into the modern American bison. In a way, they're all still with us. But let's look at them one by one. 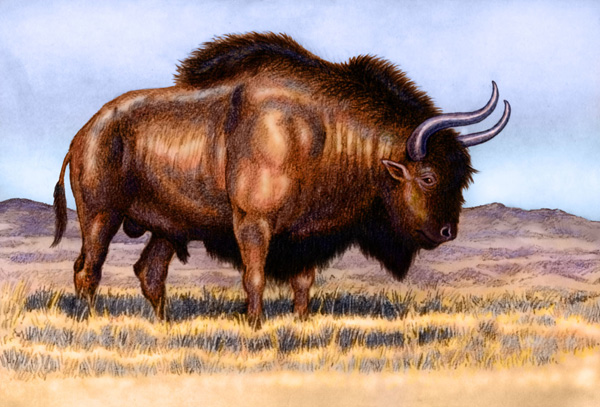 First of all, here is the Steppe Bison (or Steppe Wisent), Bison priscus. This was a spectacularly successful mammal. First emerging about 1.8 million years ago, evolving from a bison species living in Southeast Asia, it spread over most of Northern Eurasia, and by 240 000 years ago it managed to cross the Bering Land Bridge into North America. This was the main bison of the Ice Ages; it lived on the cold, grassy steppes just to the south of the ice sheets. It was a very large mammal, part of what is called the 'Megafauna', which included mammoths and, in Eurasia, woolly rhinos. Like those, it occasionally got preserved in a deep-frozen state. The most famous Steppe Bison 'corpsicle' is called Blue Babe after the mythical Paul Bunyan's giant ox companion. It was frozen about 36 000 years ago in the region of Fairbanks, Alaska, and found in 1979. It was so well-preserved that the scientists who prepared it for display in the museum cut some meat from its neck, cooked and ate it! No word whether they became sick, but at least no deaths were noted. The mummy is a bit desiccated and has lost all its hair; its skin also turned bluish from a chemical reaction that caused it to be covered with an iron phosphate; still, it is an amazing glimpse of an ancient critter 'in the flesh'.


But we also know how steppe bison looked like alive, from their portrayals in cave art. This was one of the old Ice Age hunters' most popular quarries, with the huge amount of prime beef it carried on its frame. The beautiful paintings in the caves of Lascaux in France, and Altamira in Spain, show the high regard they were held in. These depictions show them as reddish brown, with an impressive 'beard' of long fur below their necks, and a mane on top of their necks and shoulder humps. Compared to modern bison, their horns were somewhat longer, and with an 'extra' curve towards the tips.


As I've said, this bison is not truly extinct, in that its genes and descendants are still around. In America, it was likely an ancestor of the long-horned bison and the ancient bison, and by them the modern American bison. In Europe, it apparently hybridized with Aurochs (the ancestor of domestic cattle) and these hybrids in part became the modern European Bison. (The fact that these species could hybridize shows that bison were actually quite closely related to aurochs, just as present-day bison can be hybridized with cattle. It's actually doubtful that they should be in separate genera.) The pure form of the Steppe Bison, however, disappeared about 9 000 years ago with the end of the last ice age. 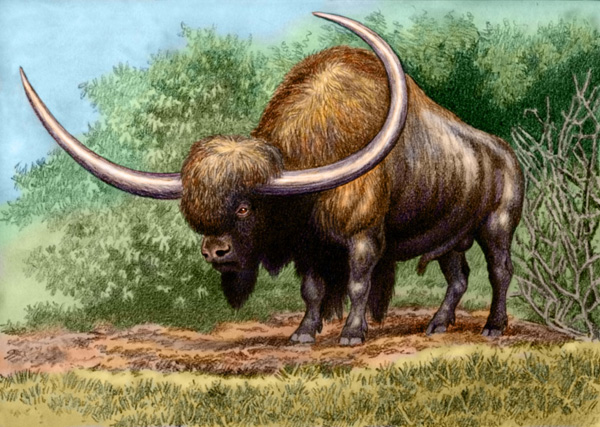 The next one is spectacular – the Long-Horned Bison, Bison latifrons. This one competes for impressiveness with the long-horned cattle of my previous entry. Its horn cores span about 2m/7' and with the keratinous outer sheaths on, would have been even longer. These immensely long horns were formidable weapons. The grassy plains of its time harboured many predators: sabre-toothed cats, dire wolves, giant bears, and even lions closely related to the modern African species. A sideways sweep of the massive head would have been enough to impale even the largest predators. The horns were likely also used by males showing off and trying to intimidate each other for the sake of choice females. The long-horned bison likely evolved from some steppe bison, in the middle parts of the USA. It lived on grassy plains or savannah-like parklands, its horns likely too much of an encumbrance in dense forests. The rest of its body was imposing as well, and it might have reached a weight of two tonnes, making it one of the largest hoofed mammals ever. It preferred warmer climates than the steppe bison, some of its fossils being found as far south as southern Mexico. It disappeared about 30 000-20 000 years ago, before modern humans colonized the Americas. However, it likely gave origin to the next species, the Ancient bison. 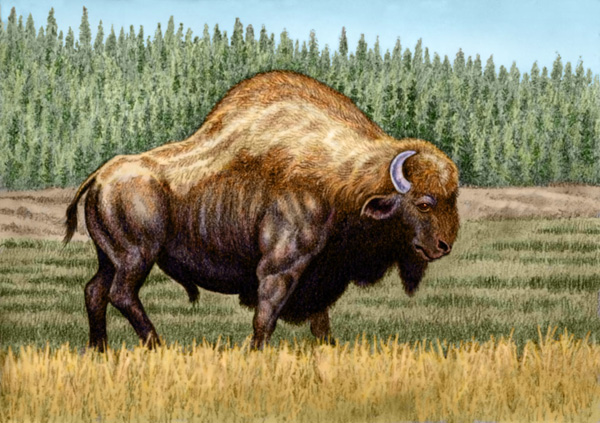 Here it is. The Ancient or Antique Bison, Bison antiquus, was very similar to the modern American bison. It was somewhat bigger, reaching 1.5 tonnes in bodyweight, and had a huge muscular hump on its shoulder. That was actually a large mass of muscle used to carry and wield its heavy head. Descended likely from the long-horned bison, its horns were much shorter. It might be that the long horns were simply too cumbersome and impractical, and thus became progressively shorter over hundreds or thousands of generations. Still, its horns were on average somewhat larger than those of modern bison. The extinction of the long-horned bison left it the sole bison species throughout most of the USA. Again, it lived in warmer regions than the steppe bison did. Many were preserved, though not with flesh and skin included, in the La Brea tar pits, where asphalt has been seeping to the surface for thousands of years. The tar wonderfully preserved a great host of critters that became stuck in it, particularly featuring the fauna that lived 10 000 to 8 000 years ago, including everything from tiny lizards and amphibians, birds like giant storks and vultures, through dire wolves and sabre-toothed cats, to horses, camels, ground sloths, and mammoths. And bison, lots of bison. Another spot where the bones of many have been preserved, from about 10 000 years ago, is the Hudson-Meng Archaeological Site, northwest of Crawford, Nebraska. The first humans had arrived in America by then, and these bison were heavily hunted. Yet, they likely didn't really become extinct, but graded into the modern bison. These continued to be prized for their meat and hides by Native Americans. Both extant bison species only just barely made it into modern times: the American bison was hunted almost to extinction by white hunters, as part of a dastardly plan to destroy the Native American societies that depended on them so much. Only a few bison survived and, sanity prevailing to some degree, were then conserved, so that the species is still around, though not in such numbers as previously. And in Europe, the bison (as I've said, partial descendants of the steppe bison) also got hunted to almost complete extinction, only a single small herd surviving under heavy protection, from which new animals have been bred so that today the species is fairly secure and established in a number of small herds in reserves and parks. It is very fortunate indeed that these still survive and carry forward the bison legacy.