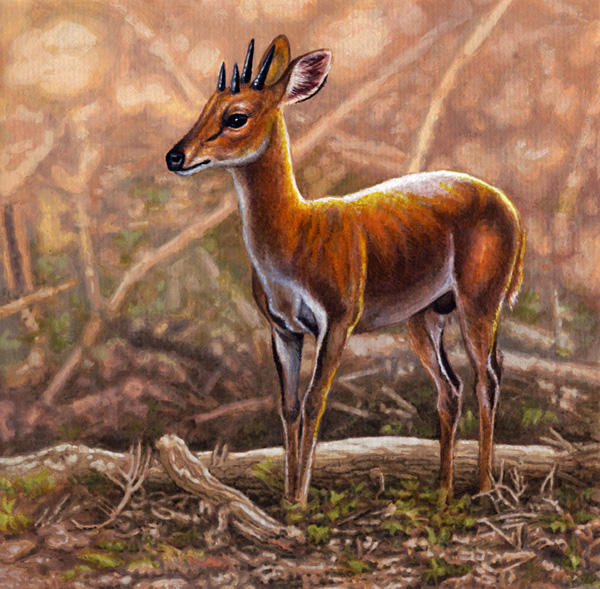 The previous article was about big-horned cattle of old; today I'd like to introduce you to a little thing that is actually a close relative of theirs! This is a Chousingha, or a Four-horned Antelope, Tetracerus quadricornis. The Hindi name means 'four horns', and the scientific name says 'four-horned four-horned', in Greek and then in Latin, just to make it sink in that this little antelope has four horns. And that is sort of a big deal. No other hoofed mammal species in the world has, as a matter of course, four keratin-sheathed horns! The only exceptions are mutant individuals, and a current breed of sheep, which was indeed derived from a mutant individual. Even when we look at prehistoric hoofed mammals, four horns are rare, though they occur in some fossil pronghorns. Giraffes sometimes have four horns (or even five, if the bump on the forehead is also counted as a horn) but these are technically called ossicones, and are not the same as the horns of cows, sheep and antelopes. So our antelope here is indeed a wildly unique thing, despite how modest it otherwise appears.


Just looking at them, the horns are not much of a deal. The rear horns are longer, reaching 12 cm/5". The front pair are on the forehead just above the eyes – if they're visible at all. Sometimes they are just low bumps not emerging from the furry forehead, not visible from the outside, but in the largest males they reach a length of 5 cm/2". These horns are ridged on the front rather than having rings around them like the horns of other antelopes and gazelles. Females are hornless.


Otherwise the chousingha looks extremely similar to the duikers of Africa. Their faces look almost identical; just like the duikers, they have grooves in front of their eyes that exude a glandular secretion, with which they mark twigs and branches in their territories. The secretion turns whitish after being exposed to the air, giving a visual as well as olfactory cue. Their snouts are black and moist, their eyes and ears large. They're about the size of a medium duiker, reaching a shoulder height of 64 cm/25" and a weight of 22 kg/50 lbs. They are yellowish to reddish brown in body colour, and their coat is coarse in texture.


Chousinghas live wild only in India and Nepal, occurring singly or in small groups. They inhabit a large range from the foothills of the Himalaya Mountains almost to the southern tip of India. They prefer dry forest with a good groundcover of grasses, herbs and shrubs, and access to drinking water. They graze and also browse on a variety of plants. They often tag along with troops of Langur monkeys, picking up fruit, flowers and other noms dropped from the trees by the monkeys. They feed and move around mostly by day, only spending the hottest parts of the day resting in shady shelter. They need plenty of cover in which to hide from predators like tigers, leopards, wild dogs and bears. When frightened, they freeze first of all; when danger is very near, they will leap and sprint away. Apart from face-gland marking, they also mark their territories with piles of their droppings. They seem to breed from the early spring to late summer. Males approach females using a coughing call; they do a bit of friendly wrestling, and then they mate. One or two lambs are born eight months later. They're extremely cute! But sadly (at least from the perspective of admiring them – not so bad from a safety perspective) their mom keeps them very well hidden away for the first few weeks of their lives.


This species, despite being widely distributed, has very fragmented populations and a small total number of individuals. Small as they are, they're targeted by hunters for their unusual four-horned skulls. They also suffer decreases in habitat area and quality as the still-increasing number of humans demand more land for agriculture and living. They do occur in numerous protected areas; we still know little about them and their conservation should be a big priority.


Last of the First

What makes the four-horned antelope especially interesting has to do with its (pre)history and relationships. This dainty little thing is indeed a fairly close relative of all those great big, beefy beasts featured in my previous article! It is what is called a basal member of the buffalo, cow and ox subfamily. This subfamily has three branches: one contains the buffaloes, wild oxen and other wild cattle; the other contains the spiral-horned 'antelopes' of Africa; and the last contains only the chousingha and its relative the Nilgai (to be featured here soon). It is interesting to note that these antelopes, and the spiral-horned antelopes, are more closely related to cattle than they are to other antelopes.


To properly understand the evolution and the relationships, let's look at the whole family we're speaking of here, the Bovidae. This family today contains all the antelopes, gazelles, sheep, goats, and cattle of the world. It is a very diverse group, but unified by horn structure: all of these animals have (mostly in the males) horns that are unbranched, never shed, and covered in a tough, hard keratin sheath. While many of the modern species are quite large, living on plains, and grazing, the first members of the group were small, living in forests, and browsing. Those early antelopes in fact all looked very similar to the modern duikers – and to the chousingha! So what we have in the chousingha is the Asian type of the African duikers, a sort of a relict from a very early stage of evolution.


But, while the duikers are akin to the other African antelopes and gazelles, the chousingha is close kin of the cattle. That means the cattle subfamily started evolving separately from the other antelopes while still looking nothing special, just like the first small, generalist antelopes. The chousingha is the last survivor of the 'type' of the very first of the cattle! It has a relative, the Nilgai, which is already more cow-like-looking, being much larger, with a thick neck and cow-like horns. Those two species today form the tribe of the Boselaphini, confined to the Indian subcontinent. In the past, this tribe included many more species, which around 9 million years ago in the Miocene period spread from their original home in Asia, into much of Europe and Africa. The Tragelaphini or spiral-horned antelopes are very close kin of the Boselaphini. Together they form a sister-group to the true cattle, both having remained more antelope-like – more 'primitive' so to speak – while the true cattle evolved much more, into the big, bulky, beefy beasts we're familiar with today.


What is very strange indeed is that the chousingha in so many ways resemble the small, humble first members of the cattle subfamily – except for their most noteworthy feature, their four horns. In that, they're apparently unique! All of the small, primitive cattle were endowed with a single pair of short, straightish horns; even when they evolved into big, buffalo types, even when in many species (as you saw in the previous article) they grew amazingly huge and spectacular horns, they conservatively kept the number of horns down to two per head! So how did the Chousingha manage to buck this trend – what kind of genetic innovation did it use? And when did it happen? We don't quite know. I imagine some ancient little pre-Chousingha looking at its reflection in a pool of water, inspecting its pitiful pair of horns, thinking of the huge-horned water buffaloes sharing its home, and pondering to itself: "skwoo this! I need more head-bling!" And then – instead of enlarging and otherwise elaborating its pair of horns the way everything else did, finding a way to grow a second pair on its forehead! It must have been some effort – too hard to manage anything more than, at best, a tiny pair of stubs – but what a success, enough to set it apart from all the hundreds of other wild bovid species past and present!