Having more or less finished with the pre-mammals, I still want to stay in prehistory for a few more articles. One of the most successful modern-day group of mammals is the hoofed mammals, and among those, the most common in sheer numbers today are the ones we've domesticated for the sake of their meat: cattle, cows, bulls, oxen. The word 'beef' comes from the French word for a single bovine animal, 'bœuf', which corresponds to the Afrikaans 'bees' (which in turn has the same ancestral root as the English 'beast'). We don't have in English a specific word that refers to a single male or female animal of the species. All modern cattle comprise basically just a single species, 'Bos taurus' (meaning 'ox bull' in Latin), which has two sub-specific divisions: those mainly of (southern) Asian origin, and those mainly of European and northern Asian origin. Both of these are descendants of the Aurochs, Bos primigenius. The difference is that Indian cattle are descended from the Indian form, Bos primigenius indicus, which had a tall fatty and muscular hump at the base of its neck. Wild aurochs were bigger and much more aggressive than modern cattle; the aurochs proper died out in the Seventeenth Century. But there are breeding efforts in a few different places going on, trying to create a new breed of cattle that is similar to the aurochs in size, appearance and perhaps temperament. There is some hope in this, though what they're breeding will never be 'true' aurochs, merely aurochs-mimics, but still, the majority of the genes from the old aurochs should still be present in the myriads of different forms of its descendants. Indeed, the wide range of cattle breeds out there today is a testament to the genetic diversity of their ancestor.

Aside from our omnipresent domestic beefs, several wild species still exist on Earth. These include the Bison of America and of Europe; the African Buffaloes in the savannah and forest forms; the numerous species of wild cattle of Asia, including the Yak of Tibet and the immense Gaur; and the Water-Buffaloes of Asia (the wild form being much rarer than the domestic) and their relatives such as the Anoas and the Tamaraw. A group so successful today, is bound to have had an illustrious pre-history, and so it is indeed, with some remarkable fossils having been found all over the world of various kinds of wild oxen, bison and buffalo. I mention just a few in this article. 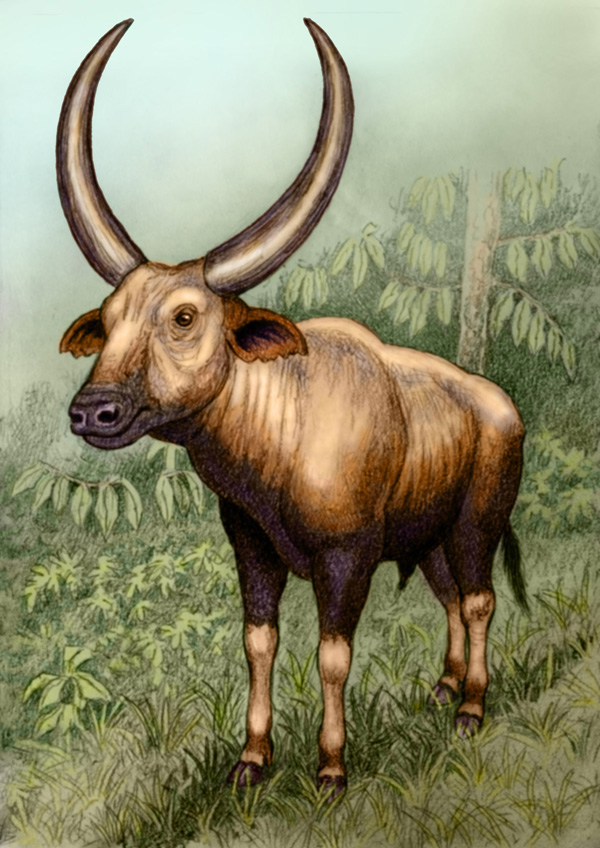 Cattle have their origin from more lightly built, antelope-like species living in the Miocene period (about 22.5 to 5 million years ago), the basic type of which still survives today in two species, namely the Nilgai (Boselaphus tragocamelus or 'cow-deer goat-camel'), and the Four-horned Antelope or Chousingha (Tetracerus quadricornis, or 'four horned four horned (critter)'), both from India. By the Pliocene period, remarkably modern-looking wild oxen were on the scene. Leptobos etruscus ('Etruscan light ox') is a typical example. The genus is known from several species from Asia, Europe and North Africa, from about 3 million years ago until as recently as 12 000 years ago. As the name says, these cattle were lightly built, but several had magnificent horns. Mostly we find only the bony core of the horns in the fossils, but in life there was a horny sheath overlying these, significantly extending the length and spread of the horns. Leptobos had high-crowned teeth to deal with grass and tough vegetation, and long legs, tipped with hooves, to help them run fast over hard ground. Leptobos could reach a metre or so in shoulder height, and a bodyweight of 400 kg/880 lbs. That may sound heavy, but it's not a patch on the kinds of weights achieved by wild cattle later on. 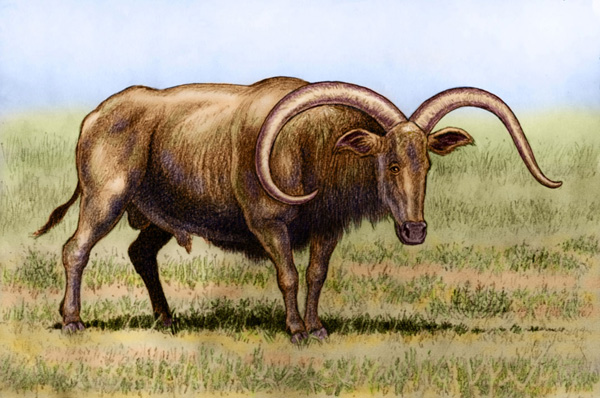 From Europe and Asia, wild cattle entered Africa where they diversified into unique forms in the Pliocene and Pleistocene. Fossils of huge wild oxen are often found in the same sites where bones of ancient humans and their forebears are found, such as the Olduvai Gorge in Tanzania. The mighty Pelorovis oldowayensis is named for the gorge; its genus name means 'monstrous/prodigious sheep'. The palaeontologists who first found their massive skulls, believed from the outward-curving horns that they were a gigantic kind of sheep, but we now know them to be proper cattle, perhaps quite close to the modern genus Bos. Apart from Olduvai, similar forms have been found in other parts of East Africa and in South Africa. The horn cores indicate horn sheaths that might have been more than a metre long around the curve. Pelorovis also had unusually long faces, reminiscent of the still-surviving hartebeests. These immense beasts could reach 2m/6'7" at the shoulder and a bodyweight of 1500 kg/3300 lbs. They might have been preyed on by early humans; they also faced such formidable predators as lions, leopards, hyenas and now-extinct sabre-toothed cats. Pelorovis survived as recently as 12 000 years ago. 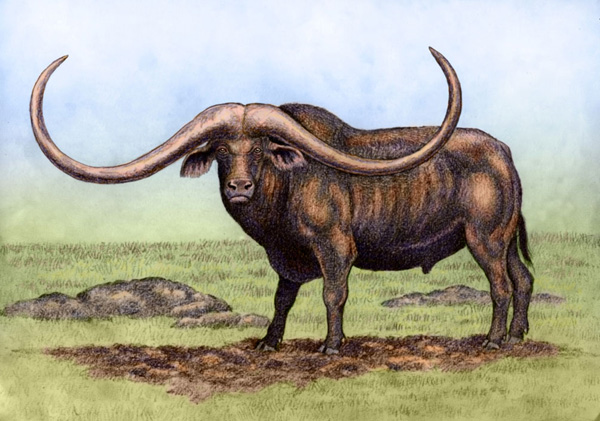 One enormous wild ox that used to be considered a member of Pelorovis is likely much closer related to the modern African Buffalo. If it is placed in the same genus, it would be called Syncerus antiquus ('Ancient joined-horn'). It had very buffalo-like horns curving outward. The difference was size – this ancient buffalo had horns perhaps spanning as wide as 3 m/10' which is more than the full had-and-body length of a present-day buffalo! In addition, the ancient buffalo was bigger in body, reaching a massive 2 tons/4 400 lbs, making it one of the biggest ever hoofed mammals. This species lived in much of Africa. It went extinct about 12 000 years ago, or maybe even later. Some rock art have been found in the Sahara of magnificent buffaloes with wide-spreading horns. If these were indeed the ancient buffaloes, then they survived until about 4 000 years ago in the region (the Sahara back then being a much wetter, lusher place than the desert it is today). But perhaps these rock drawings depict water buffaloes instead; they don't have enough specific detail to allow us an exact ID. 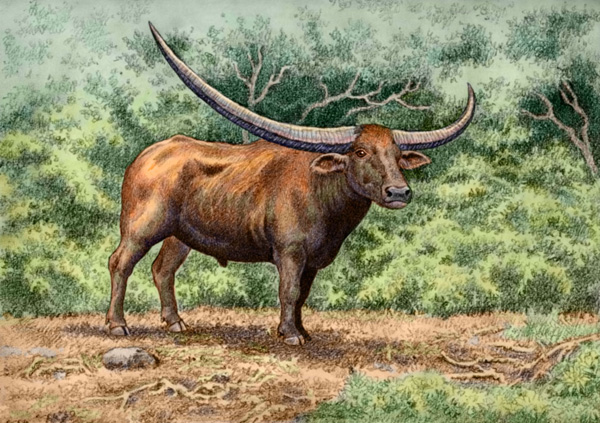 Speaking of water buffaloes, there have been a few outstanding prehistoric kinds. Here you have Bubalus palaeokerabau ('Palaeo-Kerabau (?) Buffalo'), which lived in Java and other parts of what is today Indonesia. These islands have at times during the Ice Ages of the Pleistocene been connected with each other and with the mainland, since the sea levels were much lower with so much water locked up in the ice sheets. This allowed many species to travel widely over the region, but then when water levels rose again in the intervals between the glaciations, the islands again became separated from the mainland and from each other. For as long as they were separate, species evolved on them in isolation, leading to many unique island forms. These were often short-lived, going extinct as soon as reconnections brought in other species that outcompeted them. The Long-horned Javan Water Buffalo was one such species that actually managed to survive for quite a long period, from 780 000 years ago to 12 000 years ago. Its horn cores suggest that living animals might have had horns spreading more than 2 m in width.


I would like to point out that, as magnificent as these ancient beefs were, we still today have some that can compete with them in impressiveness! Though domesticated, we have today races of cattle like the Long-Horned Steer of Texas, and the Ankole-Watusi cattle of Africa. The former has achieved record horn spans of over 3 m/10', while the latter have incredibly thick horns, in some cases as thick around as a large man's midsection. These will definitely help us should we one day clean up our act and decide to re-wild on a large scale, restoring huge and huge-horned cattle to the grasslands, savannahs and forests of the world. Aside from the Aurochs which we're trying to restore, this article hopefully shows that there are niches out there for several other different kinds of wild species. Our cattle will just have to re-learn to face down wild predators and to chow on all the nice, edible plants while avoiding the stuff that can make them sick. But the instincts are there, and I don't see why they won't be able to learn to live the wild life once more.


This article mentions African and Eurasian species; the next will speak a little about those that, while also being present in Eurasia, also entered America: the bisons.