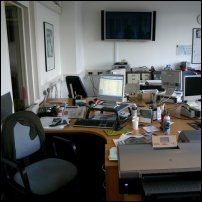 "We're all going to move.'My manager made this announcement and then leaned back in his chair. 'The Director talks about breaking out of silos and exploiting the synergies within the directorate. What he actually means is that the new minister wants to look as if he’s making a difference.'

'So where do I fit in?'I liked John, who had a laid-back approach but still got the job done. On this occasion, however, I suspected his motive for giving me this information.

'I want you to organise the move for our division, Anna.'

My heart sank. The office move was a regular event, which resembled the Mad Hatter’s Tea Party. Over a period of time, everyone did a slow dance round the floor and ended up almost where they started.

When I looked round the huge open-plan office, my heart sank further. Plants which nobody watered wilted on cabinets and brightly-coloured maps of Britain decorated columns. Some of my colleagues had attempted to personalise their anonymous desks with cuddly toys or pictures of their children. Although the management had decreed that this should be a paper-free office, piles of files, books and official documents teetered on surfaces. A mess of dirty coffee cups and stale sandwiches left over from a meeting loitered on the top of a cabinet.

I wandered round the office with a plan, spreading it out on desks and discussing with my colleagues where they would sit. It took me a while to muster the determination to approach Clive. Although he had the polished good looks of the ideal corporate executive, he was so bad-tempered that my colleague Phil had nicknamed him Rhino.

Sure enough, Clive refused to look up from his desk. 'I haven’t got time to talk to you.'

'I’ve put you in the middle, opposite John Davis,' I persisted, thinking that a seat near the head of division was sure to appeal to Clive’s sense of importance.

'I’m too busy to move. The Secretary of State wants this report by the end of the week.'

'Everybody’s moving. Anyway, the workmen are moving everything over the weekend. All you’ve got to do is pack up.'

As the day of the move approached, I started to panic. At first, the boxes failed to arrive and it took me several phone calls to discover they had been delivered to the wrong floor. Everyone groaned when I passed on the instruction that they must clear their desks and pack everything in boxes. I filled my own box with a pile of beige covered files, masses of paper, coffee cups and a pair of tights. I had been in the habit of keeping a spare pair in my desk ever since my tights ripped in the middle of a conference. The maps presented a problem. However carefully I rolled them up and tried to fit them into their tubes, they kept slipping and writhing onto the floor like snakes.

By Friday morning, however, many of the piles of paper had disappeared and nearly everyone had a partly-packed box or two by their desk. I hurried round the office, making sure everyone had labels for their boxes. I found Clive’s desk as cluttered as ever. He was on the phone, speaking at the top of his voice, despite sitting in an open-plan office.

'I’ve seen the draft report by the working party and quite honestly it’s rubbish. Some of the people involved are useless. No wonder the Department’s in such a shambles.' He looked up, saw me and slammed the phone down. ' Now what?' he demanded.

'Aren’t you going to pack?'

'What’ll happen to these?' I pointed to the line of research reports, acts of Parliament and discussion documents along his desk. He also had two trays full of working papers and several containers of pens, paper-clips and other bric-a-brac.

'The porters will have to move those.'

'They’re not going to move anything that isn’t packed.'

'I have more important things to do.'

'Everyone else has packed.'

'Find someone to do it for me.'

The arrogance of the man made me fume.

By the end of the day, I was rushing around with my hair straggling over my face, feeling exhausted. I collected piles of books and papers that had been left on cabinets, stuffed rubbish into black plastic bags and carried plants to the division’s new location. At last, everything was more or less clear, with the exception of Clive’s desk, which was as cluttered as ever. He had vanished. I stared at the piles of paper for a while, then turned and walked out. It was not part of my job to deal with Clive’s things.

On Monday, I arrived at my new location to find that some of the boxes had ended up in the wrong places. Phil was standing by his new desk with a pair of tights in his hand. As he was as tall and broad as a rugby player they looked very odd.

'Are you going to try them on, Phil?'

'They'd look better on you,' he replied and threw them to me.

He and I dragged our boxes across to their proper places and I started unpacking mine.

Suddenly, Clive came storming across the office, his face red with anger. 'Where are my things?'

'They’re probably where you left them on Friday.'

'Well, I told you they wouldn’t be moved unless you packed them.'

'And I told you to get them packed.'

'That wasn’t my job. I was just co-ordinating the move.'

'I’m going to complain to John.'

At this moment, John walked in with a nonchalant air, as if he had all the time in the world. 'I see that we’ve more or less arrived in our new place. Any problems, Anna?'

John drew up a chair, sat with his feet on a desk and listened while Clive complained. Then he shook his head. 'Anna’s right. It wasn’t her job to get the stuff packed. Everybody was responsible for their own packing.'

'But my time’s important,' fumed Clive.

'Clive, everyone’s time is important. My time, Anna’s time. Your time is no more important than anyone else's. You’d better go and see if you can find your things.'

To my relief, Clive collapsed like a pricked balloon and walked away.

I turned on my computer and was not surprised to find that it didn’t work. With a sigh, I walked round the office asking my colleagues if their computers were up and running. It was the end of the morning before any of them were. However, all my colleagues had found their boxes and were busy unpacking. The area was beginning to regain its familiar clutter, as papers and books reappeared on desks. There were reports that Clive was searching through mountains of boxes and bins in the basement store room, in an attempt to find his missing things. On the whole, I concluded that it had been a successful move.