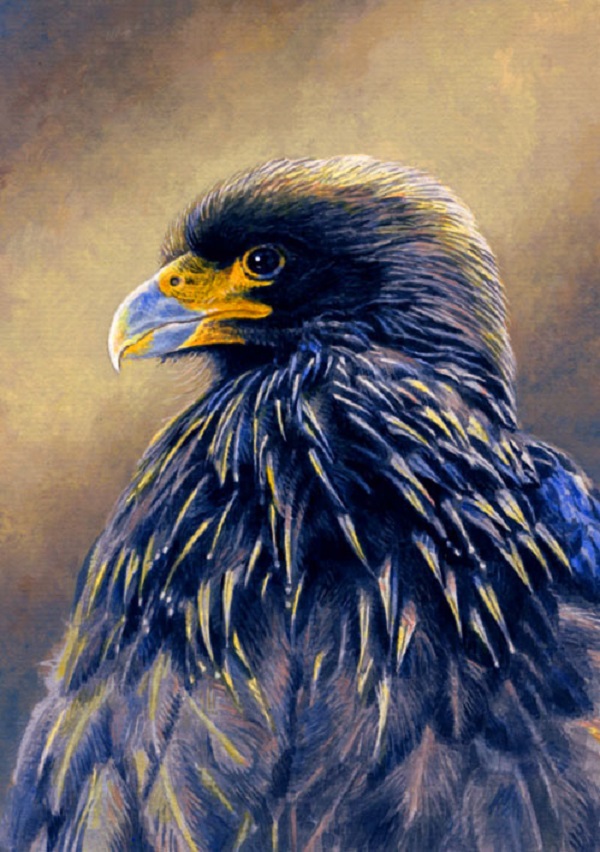 Something different this time! It's not a species from South Africa, or from Africa, or from the ancient past. It's a Striated Caracara, Phalcoboenus australis, a bird-of-prey from South America. I drew this from a photo a friend of mine took of a bird in a zoo, and the portrait looked so regal I asked if I could paint it, and she said yes. So here you have it!


Scavengers of the South

The Striated Caracara is one of the southernmost-occurring birds of prey. It occurs in Tierra del Fuego, an archipelago of islands at the very southern tip of South America, and also on the Falkland Islands, a group of islands a bit more to the East. (Some of you may remember the Falkland Island War, a showdown between Argentine and the United Kingdom for possession of these small, remote, cold and otherwise unappealing islands.) It is actually more numerous in the Falklands. Still, it is a rare species, with only about 500 breeding pairs known on the islands.


Technically, Caracaras are in the Falcon Family or Falconidae. They are rather different from most falcons, though. They are typically rather larger, the size of hawks or eagles. They are also slower. Most falcons can fly and especially swoop at great speed, and hunt active, fast-moving prey, often birds in flight. Caracaras are not great hunters; they are mainly scavengers. They are also more terrestrial than other falcons, walking around on the ground a lot. They will hunt slow and weak prey, like sick or injured birds. They catch some invertebrate prey, like grubs or earthworms they dig up with their claws. But mostly, they prey on animals already dead. They're like the falcon equivalents of vultures. They do not have naked heads and necks like most vultures do, but they do have patches of bare skin on their faces. In some caracaras this skin is red or pink; in the striated caracara it is orange-yellow. They have long legs, also bare and orange-yellow. The rest of their plumage is dark brown to sooty black; on their neck and upper chest, this is marked by light, lengthwise feather stripes or striations, for which they're named.


Several other caracara species occur in South America, one species also reaching the southern USA. A few species are quite rare; one species is extinct since the early Twentieth Century. The Striated Caracara almost joined it. On the Falkland Islands, it has for long been heavily persecuted. Sheep farmers considered it a threat to lambs and to injured sheep. Like many island birds, striated caracaras had no fear of humans, never having encountered them before, which made them easy to approach and kill. They've been almost exterminated from the main islands, only hanging around on some of the smaller and less populated outlying islands. Today, attitudes are changing, and the islanders now respect and protect the birds.


A local name for these caracaras is 'Johnny Rook'. The name 'Johnny' is what the islanders call the Gentoo Penguins that also breed on the Falklands. (And 'Rook' signifies the black, bare-faced, sociable crow of Eurasia, not a close relative at all, being a songbird.) Caracaras will scavenge dead adults and chicks of the penguins, or of albatrosses and other seabirds that breed there. Like many islands in the southern oceans, the Falklands host large breeding colonies of these otherwise entirely ocean-going birds. There are also colonies of sea lions and seals. Caracaras play a useful role in cleaning up putrid meat and rotting offal around these colonies.


They are also known to be 'collectors' of artificial objects, as magpies in other countries. In their case, they favour red objects, like red handkerchiefs. This might be because red is the colour of raw meat! They're intelligent and enterprising birds; they've learnt to take the lids off dustbins to seek food scraps inside.


Caracaras breed at the same time as the seabirds they scavenge on; the breeding season is when there will be lots of food available like eggs and dead chicks. The caracaras nest on the ground or on ledges on cliffs, laying up to four eggs per season. Once the chicks have been fledged, they move off into the interior of the islands, becoming more general scavengers. Juveniles have a lighter plumage than the adults, starting out light orange or reddish brown; this becomes progressively darker until full adult plumage is acquired at the age of five years.


Provided that these birds are protected, and conflict with humans is minimized, there is no reason why they would not recover their numbers and return to the main islands of the Falklands. For now though, they are still considered near threatened and in need of watching and protective measures.