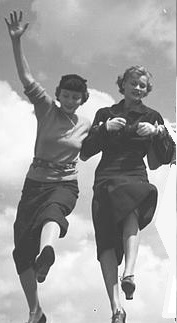 Nobody in my family had been to grammar school before. It seems strange now, but when I arrived I found the place forbidding. It was a large red brick rectangle, with a severe look created by marching lines of similar windows. Once inside, I found myself in a high hall lined with boards, with the names of former pupils glowing in gold. They had all gone on to universities and got degrees. We assembled in the hall, but were then split into groups and told to go to classrooms on the ground floor.

As we queued at the classroom door, I stood next to a girl with backcombed dark hair, wearing the regulation navy pinafore dress daringly short.

She grinned at me. 'I'm Linda. Don't look so worried. This place isn't that bad. My sister says you can play all sorts of tricks without being found out.'

When Linda became the leader of a gang of girls, I joined in. We all wore our skirts as short as we could and folded our berets and pinned them to the back of our hair. At break time, we hung around in a group and talked about pop music and clothes. We would wander to the canteen for school dinners, stopping for a sip of milk from the bottles stacked outside. Most of us discarded the bottles half full, with expressions of disgust at finding the milk warm. We jostled through the door of the prefabricated building, then strung out along the wooden benches beside the tables. When the teachers weren’t looking our way, we would swap food, or make patterns out of glasses and cutlery. I began to feel I could fit in.

At the beginning of the second term, a new girl called Alice was introduced to our class. She spoke with a trace of a rural accent and looked odd, with her long fair hair in plaits and her skirt covering her knees.

'Let's go and introduce ourselves to Alice,' said Linda.

We found her standing in the cloakroom looking lost. The cloakroom reeked with the smell of stale sweat, with an added whiff of urine from the nearby toilets. Most the pegs bore the dismal shapes of hanging clothes.

Alice gazed at us. 'I don’t know any pop groups.'

We all laughed. 'She doesn’t know any pop groups. What a square!' cried Linda. 'That’s what we’ll call you – Square. See you around, Square.'

Linda decided it was amusing to wait for Alice outside the toilets and toss comments in her direction. 'Hey Square,' shouted Linda, one day. 'Why do you wear your beret like that? It would look better like this.' She yanked Alice's beret down so it covered her eyes.

'Leave me alone!' Alice cried. 'Yours looks like a packet.'

'How about this?' She grabbed Alice's beret and flung it across the cloakroom. We all giggled as Alice set off in pursuit between the rows of pegs.

We discovered that Alice was hopeless at gym. She would twist sidewards in the middle of a somersault, or slide off a jumping horse. We were supposed to learn ballroom dancing, but no-one wanted to dance with Alice, as she fell over her partner’s feet. During one of her bungled attempts at a waltz, Linda and I sat tittering at the side of the room.

'You look as if you don’t know how many legs you’ve got,' Linda said.

Alice walked away without a word.

One day, when we were standing in the gym, waiting for a netball lesson to start, the teacher told us she'd been called away for an urgent meeting. 'Just get together in circles and throw the ball to one another. I won't be long.'

Linda saw this as an opportunity for mischief. As we joined the same circle as Alice, she whispered to me,'Let's throw the ball hard at Alice and watch her drop it.'

When someone tossed the ball to me, I threw it as hard as I could at Alice. She raised her hand in an attempt to catch the ball, but it hit her finger hard, knocked it back and she gave a cry of pain. As she held her injured hand in the other, I saw her little finger sticking out at an unnatural angle.

I hurried towards her. 'I'm sorry, Alice. I didn't mean to hurt you.'

She looked at me with tears in her eyes. 'Then perhaps you should think a bit more.'

When I went home, my brothers were fighting on the sofa. 'Stop it, you two. You'll get hurt,' I yelled and stomped upstairs to my bedroom. In truth, they often fought but rarely hurt each other, because they knew how far they could go. When Linda and I had mocked Alice, we had been amusing ourselves, but we hadn't thought if we were hurting her. This time, I knew she was hurt and felt bad about it. I realised we'd probably hurt her every time we'd made fun of her and felt ashamed.

At lunch time the next day, I went looking for Alice. It was one of those grey, miserable days when people want to stay indoors. At school, only the sixth form were allowed to stay in their classrooms, but the rest of us hung around close by the school buildings, trying to keep out of the cold. I couldn't find Alice, so I walked down the field. She was sitting on her own on a set of steps that led down to the lower part of the field, where we played hockey. It struck me how lonely she seemed.

'How's your hand?' I asked, when I reached her.

She showed me her finger in a stall. 'It was dislocated.'

'Not now. It did yesterday, though.'

I sat down on the step beside her. 'I really am sorry.'

She didn't reply, so I gestured at the book she had in her other hand. 'What are you reading?'

'There's not many birds where I live,' I said, thinking of the untidy green space behind our row of houses.

'There are some in the row of trees down there,' she said, pointing towards the bottom of the field.

'Is that where you go at break times?'

I decided I wanted to make up to her for the hurt we'd caused her. Besides, one of the subjects I liked best was biology. It was interesting to learn how plants photosynthesized, and I thought animals and birds would be even better. 'Can I go with you?'

For a moment, she gazed at me. 'You'll only make fun of me with your friends afterwards'.

I soon found that Alice was a better friend than I had imagined. She was a keen reader and was prepared to lend me books. As she had grown up in rural Warwickshire, she knew far more about plants and animals than I did. I soon tired of Linda's fooling around, concentrated more on my school work and Alice sometimes helped me with homework. Linda left school at sixteen, but Alice and I joined the sixth form. By the time we left school, we were firm friends and I was delighted when we both got places at the University of Kent. Alice studied psychology, while I did dentistry, but we have kept in touch ever since. However, sometimes when I see her, I notice the little finger of her left hand is distorted. I have never forgotten the way Linda and I made fun of her at school and I still regret our unkindness.