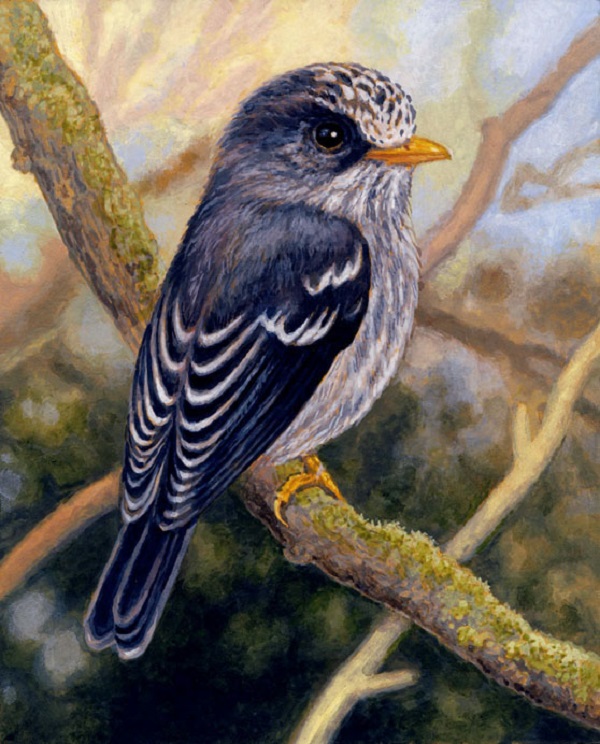 The little birdie I bring you today is not a South African species; it is not really an African species either, but one inhabiting a smallish island off the African coast. It is Humblot's Flycatcher, Humblotia flavirostris. Its scientific name means 'Humblot's yellow-beaked thingy', after French naturalist Léon Humblot. I chose it to represent the plight of a great many island-living species. Birds, especially, have managed to colonize pretty much all colonizable islands on Earth. Once a certain species has managed to establish itself on an island, evolution starts. The population is typically small, and genetic changes accumulate rapidly. There is no sharing or diluting of genes with birds from the original mainland area, and soon a new species has evolved. In the case of this little flycatcher, not only is it a unique species, but a unique genus, Humblotia (whereas the flycatchers that might have been its ancestors would likely have been in the genus Muscicapa which just means 'flycatcher'). It is the sole species in this genus, with nothing else quite like it existing.


Life on a Perilous Slope

Humblot's flycatcher lives in only one place: the slopes of Mount Karthala, the principal peak on the island of Grande Comore, of the Comoros Archipelago. The Comoros consist of four main islands (one of which, Mayotte, is governed by France, the others being independent) that are roughly in between Africa and northern Madagascar. Animal and plant life on the Comoros are, however, closer to that of Madagascar than that of Africa, but unique enough that the Comoros qualify as a distinct ecological region. This flycatcher is the only bird genus entirely restricted to the Comoros, making it the most unique element of the avifauna of the islands.


The island of Grande Comore (Ngazidja in Comorian) is, as you might guess, the largest island of the group. All the islands are volcanic. They were never connected with Africa or Madagascar, instead having risen out of the ocean as a result of volcanic activity. In addition, they're fairly young (geologically speaking, some millions of years instead of billions, which is the age of the continents). Mount Karthala is one of two shield volcanos forming Grande Comore, the other one being La Grille. It is the tallest mountain on the islands, reaching a height of 2361 m/7 746'. At its summit, it has a crater or caldera measuring 3 km x 4 km/1.9 x 3.5 miles, the largest in the world on an active volcano. Yes, an active volcano! Mount Karthala has in fact erupted more than twenty times since the nineteenth century. The most recent eruptions were in April 2005 and May 2006. Such eruptions pour lava down the slopes and spew ashes and poison gas into the atmosphere, while also changing the mountain's features. For instance, these latest eruptions widened the caldera and obliterated a volcanic lake that used to occupy it.


And yet, despite the volatility of this mountain, birds and animals live there! Apart from the flycatcher, three other bird species live only on the slopes of Mount Karthala: a small owl, a drongo, and a white-eye. Volcanic soil is quite fertile, and together with the moist, tropical climate of the islands, sustain a lush, evergreen forest from sea-level up to an altitude of 1 800m/6 000'.


It is this very same soil fertility and amenable climate that also attracts people to the slopes of Mount Karthala, in spite of the volcanic peril. The recent eruptions saw the evacuation of 30 000 people. But as soon as the volcano quited down, the people returned, to resume cultivation of their crops. Much of the forest has already been destroyed and turned into farmlands.


Between the Scylla of volcanic eruptions and the Charybdis of encroaching human populations, the little flycatcher is perched perilously. It is a small thing, just 14 cm/5.5" in total length. In addition it is drab, mainly greyish to brownish, with bold streaks on its chest and belly and a small almost-crest on its head. Its plumage is softer and fluffier than that of other flycatchers. The only colourful elements on it are its bright yellow bill, and its yellow feet and legs. But it has a cute, large-headed appearance that attracted me when I saw photos of it (of which only a few exist). It typically sits quietly on a branch well within the forest canopy, spying out the surrounds and launching into short flights to catch insects in its broad bill. It can occur singly, or in twos or threes. We know very little else about it; so far only a single nest has been seen, a cup placed high in a tree and containing two chicks.


In addition to habitat destruction, this flycatcher is also threatened by introduced species. Again, this is a common plight for island critters. Humans settling islands bring in so many other things that either prey on native species, or compete with them, or totally change the very ecology of the islands. In the case of Grande Comore, the introduced species are mainly strawberry guava trees, Psydium cattleyanum, which replace the native forest trees; Indian Mynahs, Acridotheres tristis, which chase away other birds and take over their nests; and domestic rats, which feast on the eggs and chicks of native birds. Facing all of this, Humblot's flycatcher is now an endangered species, with a population of between ten and twenty thousand, and decreasing. Hope comes in the proposal of a nature reserve to safeguard the remaining forests on Mount Karthala – but so far, nothing has yet happened in practice. So this remains a seriously threatened little bird, and we remain in great ignorance about this unique little thing which, if we could understand it better, could tell us much about how colonization, adaptation and evolution work on volcanic islands.