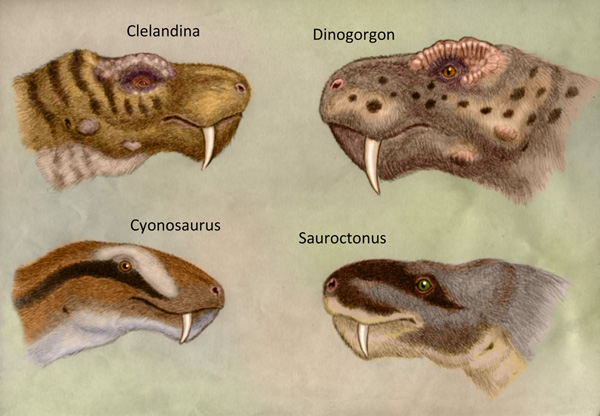 In my previous article I gave basic info on the Gorgonopsians, a group of proto-mammals that were very successful in the middle to late Permian but then died out. I treated the genera Lycaenops, Inostrancevia and Rubidgea there, these being three of the best-known members. Now let's look at some more, to get an idea of the diversity of the group. I reconstruct only their faces here, their bodies presumably being fairly similar. Remember that we don't actually know the coat colours and patterns for these (indeed, we don't yet fully know whether they had furry coats at all), so all of that is from my own imagination. I only figure that like any living group they would have been diverse and thus would have featured a variety of adornments.


In the first picture, bottom left is Cyonosaurus longiceps ('Long-faced Dog Lizard'), one of the earliest and most primitive gorgonopsians. It was the size of a cat to an average dog, with a skull up to 18 cm in length. Its skull was long, low and not as powerful as those of later species. It lived in South Africa.


Bottom right is Sauroctonus progressus ('Advanced Lizard-Killer'), from Russia, with a close relative being known from South Africa. It was starting to get big, reaching an overall length of 2m. In addition to its long, sharp canines, incisors and post-canines, it also had blunt teeth on its palate.


Above left is Clelandina rubidgei ('Cleland and Rubidge's Critter'), a large species from South Africa. Like Rubidgea of which it was a relative, it had bosses of thick bone on its skull and jaw, perhaps overlaid by tough, keratinous patches. It had no teeth in its jaws behind its canine teeth, only a bony ridge. It is remarkable for apparently having very small eyes. Inside a well-preserved skull specimen there is a ring of bone, called a sclerotic ring. This bony ring is present in a diversity of critters, and today some birds have it as well. It goes around the eyeball, helping it to keep its shape under pressure of distortion. The tiny sclerotic ring of Clelandina indicates very small eyes, much smaller than the sockets in which they found themselves. Thus, Clelandina was likely adapted to see in bright daylight. Other gorgonopsians, with much larger eyes, would likely have been able to see well and even hunt at night.


In the upper right corner is Dinogorgon rubidgei, ('Rubidge's Terrible Gorgon'). Even bigger than Clelandina, it had a similarly heavily thickened skull. Its fossils were found in South Africa and Tanzania. 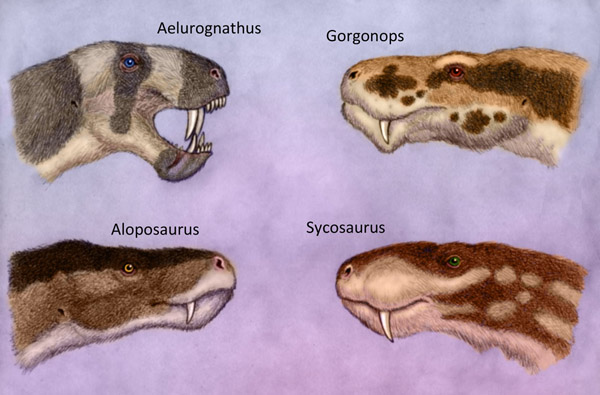 On to the next picture. Bottom left, Aloposaurus gracilis ('Slender Fox-Lizard') is another very early and 'primitive' gorgonopsian. It is known from a skull that would have belonged to a cat-sized animal, but it might have been an immature individual. It lived in South Africa.


Upper left is Aelurognathus tigriceps ('Tiger-headed Cat-Jaw'), also from South Africa. Up to the size of a large dog, it had fearsome canine teeth and a lower jaw deepened and widened at the front to give them some support and protection with its mouth closed. A fossil tooth has been found and attributed to it, with the carcass of a dicynodont, which suggests that the Aelurognathus was scavenging on it. Marks on the bones themselves do not match the teeth of this gorgonopsian. Thus it would seem something else killed the dicynodont, and the gorgonopsian then came and perhaps chased away the predator to scavenge on the corpse.


Gorgonops torvus, ('Surly Gorgon-Face'), also from South Africa, is the one for whom the whole group was named. Already described in 1876 by Richard Owen, the genus is known from many fossils, and several species have been attributed to it. It's mostly known from preserved skulls, ranging in size up to 35 cm/14", which indicates an animal almost as big as a lion. With canine teeth as long as 12 cm, it could hunt the thick-skinned and armoured Pareiasaurs, which were the largest herbivores of the time and place.


That brings us to the end of the gorgonopsians. Arising as small animals in the mid-Permian, they included the biggest and most successful predators of the late Permian. But the Permian ended in catastrophe. We're not yet exactly sure what happened, but there are indications of massive volcanic eruptions, perhaps enough to seriously change the atmospheric composition and cause climate instability. There could have been significant global cooling or warming, some indications being that ocean water temperatures rose to fever levels (over 40 degrees Celsius/105 degrees Fahrenheit). Whatever it was, it was enough to cause the extinction of almost every living thing; 90% of sea-living species perished, and 70% of those living on land. The gorgonopsians, the pareiasaurs, and many others, were among the victims. Stabilization happened in the next period, the Triassic, which saw a new burst of evolution among the survivors, which notably included the archosaurs, which subsequently evolved into, among others, the crocodilians, flying pterosaurs, and the dinosaurs. Among the proto-mammals, the survivors were the therocephalians, dicynodonts, and cynodonts, the latter of which became the all-time most diverse group of synapsids, indeed eventually including not only a great diversity of proto-mammals, but also evolving into the true mammals – meaning that we, too, are technically cynodonts! They're therefore the next group we'll be looking at.