SAYSF: Chapter 3 – It's A Kind Of Majick 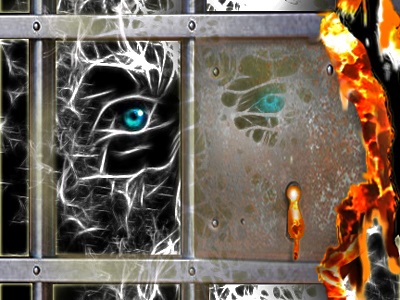 "So you're telling me we got a bunch of weirdos riding around the countryside, preaching magic and chopping people's heads off...with freakin' swords?"

Agent Fraser leant in close and whispered, "There can be only one!"

Cavachon didn't know what disturbed him most, her perfume, her outfit, or her knowledge of cult movies, struggling to remain professional, he opened another file.

"And I suppose this is some kinda movie special effect too?"

The eight by twelve showed the cell block in a small-town Sheriff's Department, middle cage open. Close-up of lock. Ironwork melted like taffy.

"CCTV – The biker perp simply stroked the cell door and the freakin thing melts, strolls out cool as you like and rides away!"

"Thermite, Cordite, acid?" Frank mused to himself, "How many now?"

"Last best Intel, over five hundred, most very peaceful, charm offensive on the few locals up there- some minor arrests for drunkenness, one theft, two bar fights...and obviously Mister MacLeod in the middle of them!"

"So why are five hundred bikers gathering – yes, I'm aware of the reference – no rallies or meets planned, no liquor licences or permits for music requested, nothing legit at least?"

"ATF, DoJ, DEA, IRS – nada. Only reference the Bureau has is a five-year-old sting operation involving Cults and Human Trafficking, no arrests, no charges, turns out some bike club merely using religious mumbo jumbo to recruit new members. Resulted as new age hippy tree hugger stuff, a bit of Paganism, a lot of Taoism. No involvement with crime, drugs, no RICO, case dropped".

"Well, we definitely have a crime now! Time to saddle up, get up that hill and mingle" Frank picked up the Harley key fob and clapped a hand on his leather clad partner, "Standard undercover recon, look and log, 'seek and we may find' indeed...and Fraser?"