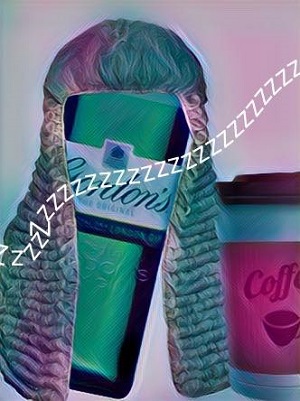 I checked my watch, nine thirty-five. AM.

Obviously, somebody else needed a little help through the day ahead, I breathed a sigh of relief, inhaling more gin fumes, at least it wasn't just me dreading the week ahead.

Gin lady shuffled off to find one of the few free uncomfy seats near the frosted windows, gradually the air cleared, but the gloom thickened.

Forms filled in, forms checked, excuses turned down (there was a time when one sentence would've proved sufficient to excuse myself, even on the original letter, but those days were long gone in the age of equality and inclusion for all), so it was I faced a long and very tedious morning of trying to read ancient magazines, ignore the weirdos that were obviously desperate to give me their life stories, and try not to buy another very expensive coffee.

By four, PM, my name had still not been called. Gin lady was still snoozing on the uncomfy chair by the window when we were finally excused and sent home.

One down, at least four to go.

Day two, I remembered to take a book. Three pages into chapter three and a very lubricated lady wanted a chat, gin will do that before ten.

Thankfully, just after her description of her last operation and the frustration that her husband was oblivious to her transformation (unsure whether she was referring to the boob job, lip job, eye lids, cheek implants or the hip replacement – the gin fuelled list was rather extensive), my name was called over the tannoy.

Thirteen of us crammed into the lift, more forms. More desperate excuses.

Five minutes later, surprisingly I was excused. Obviously, someone somewhere felt the same as I did. Waste of time me being there, totally unsuitable for the task in hand.

Wednesday. Most of the chosen ones straight to the lifts. Us unwanted folk doomed to spend the morning ignoring the sleepers, distancing ourselves from each other, pretending to read or be engrossed in the muted telly. Nursing cold but very expensive coffees.

The weirdos were now forming tribes, watching Judge Rinder and having animated debates about Justice. They seemed to be thoroughly enjoying the ordeal.

Tannoy man summonsed me away from my book. I skirted past the tribal arguments.

More lifts, more excuses. This time not enough to get me off.

However, thankfully, I recognised, and was recognised, by one of the main players and was sent back down to the now deserted waiting area – even gin lady was now one of the chosen.

Please, please not today. Or if I had to, give me a quick one. Finished by Friday, please?

Back downstairs, gin lady had been given a warning that she may be needed for several weeks! Shares in Gordon's would skyrocket.

A day and a half spent listening to inane arguments about an obscure point of Law before a change of plea and an early dart. A week's wages lost, expenses don't include the gold plated coffee, and the bus ride home horrible in rush hour.

If anyone, anyone, tells you they are excited to have been called for Jury Service, that it's fascinating to see British Justice in action, please, please, tell them it's more than likely to be very, very dull.

Tell them to take a very thick book, maybe give up coffee for a week, oh, and stay off the gin.