A couple of nothings from the Post Editor's journal. (Not everybody is profound.)

Dressed to the Teeth 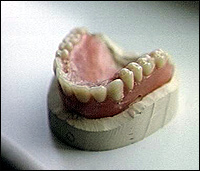 For some reason, I've been thinking today about...dentures. (If you don't know why that is, you haven't been on Twitter1. I can't remember when I first learned that humans could have wearable false teeth.

My mother told me about my first encounter with dentures, on this wise:

My sister and I were preschoolers. One fine day, we rode over to my grandmother Babe's house, as we did almost every day. As usual, we scrambled up her back steps, opened the never-locked door, and burst into the tiny house, full of fun things to know and tell. We found Babe standing before her bathroom sink, with the door open. She was brushing her teeth.

Said teeth were in her hand, not her mouth.

According to my mom, Babe was mortified. She thought she'd just traumatised two infants. Not to worry, my mom assured her later. The sole topic of conversation on the ride home was how only our beloved Babe could think of something so utterly cool as to have *removable* teeth. And where could we obtain this practical item?

My other grandmother had false teeth, too. We knew this because, a few years later, she removed hers at the breakfast table, placing them decorously on a napkin. My mother tried to pretend she hadn't seen this.

My grandfather gave the game away. 'Murry-Emma!' he bellowed. 'Put yore teeth back in! We have comp'ny!'

My grandmother shouted back, 'I cain't! Them mail-order teeth don't fit right! I'm sendin' 'em back!'

I hasten to add that my grandparents were not belligerent people: they were just very hard of hearing. We giggled until we almost feel off our piano-bench perches at the farm's giant dining table. Once again: only our grandparents could be so...original.

My mom's younger brother didn't have any teeth at all when he was older. A stoic who did not believe in dentists, he simply let them all fall out. He lived happily ever after with toughened gums. I come of hardy, but peculiar, stock.

In the early 1960s, there were a lot of TV adverts for denture adhesive. Attractive older actors touted their cream of choice. People in the US are aware of the brand names, even if they don't use the product. Which will explain the jokes you're seeing on Twitter about Mr Trump needing some Poligrip.

I still have most of my teeth, thanks to the best dentist in North America. He practices from a historic house he owns on the hilly main street of a tiny town on the Allegheny River a couple of miles from the Hoggett farm. My sister's known him for 40 years. The Doc is determined to keep my teeth in my mouth with spit and bailing wire. They're crooked, they're uneven, and they are textbook demonstrations of the joys of the Appalachian overbite. But they work.

I'm glad: I'm not a gazillionaire with huge resources who can afford the very best artificial teeth. And I can say 'United States' with them.

Historical note: Mr Trump is not the first denture-wearing president. That would be George Washington. And no, his teeth weren't wooden. He had a set made of hippopotamus ivory, and some human teeth, too. (See the great Guide Entry on Waterloo Teeth.)

On the Vanity of Earthly Science

The advert on the top of my page says, '

O tempora, o mores. This is why we have technology and civilisation, people: so that a pharmaceutical company can use lasers to drill holes in an analgesic.

1The US president had slurred part of a speech. There was speculation about the state of his (presumably false) teeth.