The author writes: ' All this wet weather is making our lawn look like the Himalayas...worms tempting the beasts that lie beneath up, methinks?

The Beasts That Lie Beneath 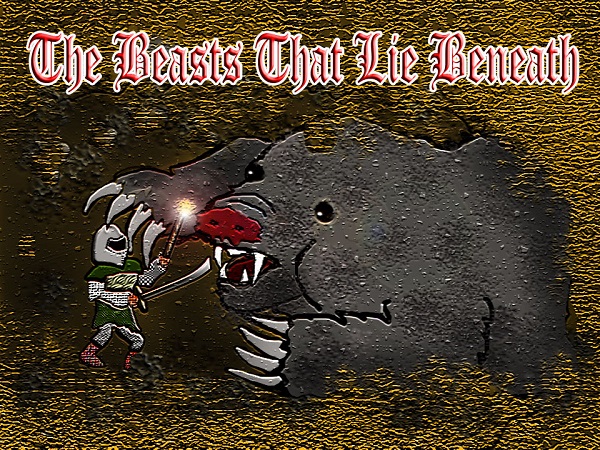 The earth crumbled, and the ground shook around them as, once again, Lord Parvus struck out desperately with his shimmering Bloodsword.

The beast hissed and raked at his breastplate with eight claws, each half his own height: slashing out blindly at the intruder, the beast roared.

Leather snapped, and the beautifully ornate plate fell at the beast’s onslaught.

Parvus, his retreat blocked by the seven knights, had little choice but to press on.

Fetid breath assaulted his senses as, at last, he managed to pierce the beast’s chest.

As the mighty Talpidae Monstrum died at his feet, Parvus was showered with earth as the tunnel finally collapsed.

Thinking quickly, he retrieved the breastplate. Jamming his bejeweled pommel into the beautiful turtle bone, he forced the ivory armour up into the crumbling roof.

Slanting the blade, he plunged the tip into the beast’s skull, thus managing to prop up the falling roof.

Hurriedly beckoning his troop to follow, squeezing betwixt bloodied and rank fur and tunnel walls, the brave eight entered the main cavern just as the tunnel collapsed, burying the beastly Guardian and his beloved armour and sword.

No way now but onwards.

Tallow torches did little to lift either the blackness or their spirits.

Death or Glory awaited in the darkness.

Far, far above, the gardener cursed as heavy boots stomped on yet another bloody molehill; that beast was ruining his lawn!