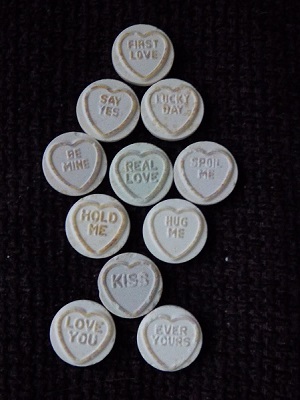 For Christmas 2013 my darling kindly gave me some Love Hearts - sherbet-type sweets with little messages on them. I used to like Love Hearts when I was a child, as I found the messages amusing but particularly liked the fizzy taste and texture. For one reason and another, it wasn't until 2017 that I actually opened the 2013 packet and tried one.

Unfortunately, unlike in my childhood when the sweets contained artificial colours, flavours and preservatives1, the natural ingredients in the new loveheart were not quite so durable, so it tasted very 'off' to say the least (not surprising really, given that the best before date was 2015...) and I threw it away.

Since then, the packet sat on the kitchen counter while I pondered what to do with it. The solution appeared thanks to h2g2 and the February 2018 Create Challenge - how better to commemorate the lovely gift than to spread the love?!

I see from the Love Heart webpage that Love Hearts first appeared in 1954. Classic messages are 'Be Mine' and 'True Love'. Other messages have evolved over time - 'Fax Me' and 'Page Me' were introduced in the 1990s and the one I ate from 2013 had 'E Mail Me' written on it! In 2014 to celebrate Love Hearts' 60th Birthday, 'Tweet Me' and 'Skype Me' were added, and in 2018 Love Hearts featuring heart-shaped emojis are available.

In my packet I was interested to discover that there were a few messages for people who in the past would have just not given someone a Love Heart. 'Grow Up' featured twice, and 'Too Much' was also in there. The Love Hearts catered for people in the 'Friend Zone' too - 'Good Pals', 'Like You', and 'Keep Cool' all featured.

I was able to make a little love story out of the others in my packet:

Now I've finished playing with the Love Hearts and arranging them in patterns, I'm happysad to admit it's finally time to dispose of them, and that's OK.

1And I was able to eat them within a few days anyway because I didn't have things like government 'healthy eating' advert jingles as my earworms then.2It is a bit rich to ask someone else to spoil you, but I included it because my darling and I liked to give each other presents, and we both felt a bit spoilt at different times because of the lovely generosity.