A tale of dimensional travel, intrigue, and very loud music. Brought to you courtesy of a bunch of writers with nothing to do but make fun of the Editor's organ playing.

The author of this opus writes:

'Not many people know the origin of the Heavy Leslie bluegrass organ craze of the late 60s....here's how it all started (in this reality anyway!)

So put your headphones on and turn the volume up to four, my hard rockin' amigo! 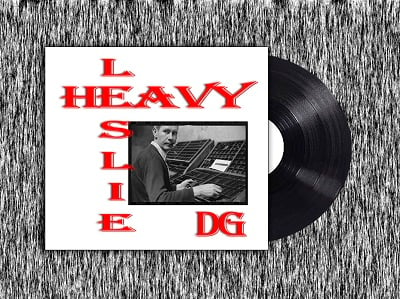 No sooner had Tony, Terry, Bill and John decided to form a band and tour the local pubs in Birmingham than a rather somber man turned up at Tony's mum's house.

The American accent sounded so cool to the lads that they didn't think to ask him exactly how he'd known about the Polka Tulk Blues Band, furthermore they had absolutely no idea how (apparently moments later) the four of them had ended up sitting on the apron of the De La Warr international airport.

"Now that's one cool set up, Oz!" Tony was transfixed by the mountain of guitars and amplifiers piled up on the Tarmac.

"Must belong to..." Bill turned his shaggy head upside down, despite his dizziness, to read the name stamped on the gear, "Must belong to Black Sabbath?"

A few yards away, a rather bemused dentist named Ian shook his head sadly, "Bloody hippies!" He trudged off trying to find out why his flight still hasn't turned up.

She was sure the man was following her.

Late October and all the nuts in Bexhill were already trying to outdo each other for Hallowe'en. Three times now she'd seen this man, long black cape, an obviously fake jet-black wig and an even faker sounding American accent, looked like some kind of mad music teacher.

As she entered Sackville Road she was aware of him again. Enough was enough. Turning as she passed the dental surgery, she was about to give the stalker a piece of her mind when another rather strange man, sporting rather shiny brogues, came out of the dentist.

Grabbing the caped dude, the man with the brogues thrust several cassette tapes into his hands, "Learn these, learn them quick, Dmitri!" And with that the guy turned up his collar against the sudden downpour and hurried off towards the arts centre.

'Dmitri' turned the tapes over in his hands, "Wow, cool, Hammond music....and for the Leslie!" Studying the inserts he added, "Never heard of Black Sabbath, though!"

He shoved the tapes into his voluminous cape and set off after the man in the brogues.

"I knew this day was going to be odd, helicopters in the park, a trip down memory lane and now this..." She struggled for the words, "Now my day's been hijacked by strange Americans and Ozzy Osbourne! Maybe I'm just a little paranoid?"

She shook her head again before popping into the Cactus Café for a nice Spanish brandy to settle her nerves.

DG had no problem playing along to the backing tracks, adding his own style and flourishes to the unfamiliar music.

The Leslie blasted out the rather heavy-sounding melodies, not at all to his personal tastes.

Then in a flash of brilliance, Dmitri altered the rhythm and tempo, changing the rather sombre tunes to upbeat bluegrass organ ditties.

The hotel echoed to the beat, catching the ears of a certain concert promoter who had unexpectedly been let down by his main act, an up-and-coming rock and blues band from Aston in Birmingham.

A quick conversation in the bar, the promise of gluten-free cakes in the dressing room, and the posters were changed for that night's performance.

Outside the hotel, (the seventh nicest place to stay in Bexhill), hunched against the still falling rain and nursing an awful toothache, the man from Delaware, smiled down at his soaking wet brogues, "I may be a master of realities, but I still can't keep my feet dry!" 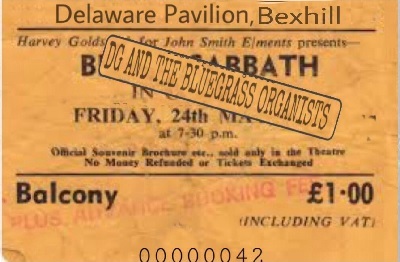 The man from Delaware smiled through his appalling toothache as the posters outside the Delaware (coincidences never failed to amuse him on his many, many travels) Arts Centre.

"Proudly presenting DG and his bluegrass organ – for one night only" beneath the hastily printed poster the Black Sabbath logo could barely be seen.

Already the queues were forming, hundreds of long haired kids, hippies, hipsters, mods and rockers gathered on the prom, disappointed in the lack of all things Sabbath, but eager to witness the latest American musical trip.

Through the gaudily painted but badly soundproofed walls the sound of a Leslie warming up.

Inside, Dmitri risked turning the volume up to four.

"What do you want to hear?"

"Paranoid!" Three thousand voices reply, hands in the air towards their rock god.

"Ok, I'll do Bleeeeping Paranoid! Let me see your hands!"

Six thousand hands in the air as the Leslie strikes up.

"Let's go bleeeping crazy....and I want a full review with pics written up for the Post!"

The strains of the Leslie fill the hall.

The fans are stunned.

Oz, still grounded at De La Warr airport, but now not missed in the adulation of the crowds.

A reporter from The Bexhill Post is scribbling in a notebook. A Whiter Shade of Pale Nigel is destined for Number One, DG – the godfather of Heavy Leslie arrives from the States, forget Sabbath, bloody Sabbath never showed up!

A scruffy biker type dude is painting a visionary mural on the wall, depicting a series of mystical events from the last 24 hrs of his life, which only God has known about, till now.

The man from Delaware sat in the cafe (which was listed as the 7th best cafe to have lunch in in Bexhill) and cursed again as the hot tea irritated his already rather irritable teeth. The dentist in Sackville Road is still closed.

He stared out at the still falling rain battering Terminus Road. His hands, however, never even glanced at the downpour, they were far too busy doodling what appeared to be a rather complicated map, his left hand traced outlines of coastlines and rivers in a deep Tesco back to school blue, whilst the right neatly added what appeared to be roadways or railway tracks in a rather leaky Tesco basics red felt tip.

He hummed along with A Whiter Shade of Pale Nigel, the old hit coming from the cafe's older radio. Outside, the rain beat time on the rented bicycle's seat......

The man fron Delaware opened the orange carrier bag and inspected the items he'd just bought from the seventh most popular hardware store in Bexhill.

Ducking into a service alley on the Ravenside Industrial Park, he carefully unrolled the sheets of acetate and unscrewed the top from the silver automotive touch up kit.

He smiled gently as he gazed down at his finished work. Unseeing, he believed himself unseen, as he glued two pieces of the transparent material together, grinning as he held up the perfect silver dragonfly.

The perfect silver dragonfly launched from the man from Delaware's hand, effortlessly seeking an up-draught despite the still pouring rain.

He watched as it grew smaller and smaller with altitude, finally disappearing into the light.

The Light was ecstatic as the silver-winged creature appeared and settled on top of a pile of technical drawings.

All was well, all transgressions against perfection eliminated.

The Light placed the dragonfly in line with the several trillion that already lined this Place.

Each insect's wing patterns mapping out a new world, a new reality.

The Light was truly pleased with the One known simply as the man from Delaware.

Not only had imperfection been eliminated, but this new reality had been given a great gift.

The Light looked down upon Heavy Leslie and saw that it was good.

In the shadows Darkness laughed.

"All that just to stop Sabbath's seventh album from ever being made? "

"I am joyful that there is now a reality without Technical Ecstasy, yes!"

"My turn!" The Darkness looked down upon Creations and pondered the next Great Evil.

In a beautiful garden in Delaware, a quiet man sat, wood shavings and sawdust on his brogues, as he concentrated on the sublime carving of an owl in flight.

He reluctantly put down his chisel and rubbed at his jaw. Toothache again.

The garden vanished and the man from Delaware found himself ankle deep in snow, the sounds of amplified yodelling coming from the small village on the hillside.........toothache and wet feet, this was going to be another awful job.

Technical Note:   The video A Whiter Shade of Pale Nigel can be viewed only in the Pliny skin. Listen with caution.