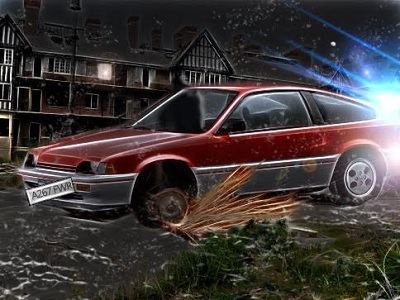 Tom's fingers drummed a casual counter-rhythm on the steering wheel, half a beat behind the wiper blades, as he waited for the lights to change. Dave sat hunched low in the passenger seat, collar up and cap pulled down, struggling to keep his eyes open.

"Will you stop your bloody tapping mate? Doing me head in!"

Tom ignored the older man, added a low hum to his repertoire just to wind Dave up a bit more, as the red sports car pulled level. Loud exhaust growling.

Dave tipped his cap back slightly and glanced over at the driver. Ugly bugger he was, too.

The driver held his stare, grey eyes boring into him, the vivid scar running from forehead to chin glowing eerily in the traffic light glow. The window lowered as the driver continued his stare.

Dave took the implied challenge and lowered his window, rain immediately soaking his left side. "Can I help you mate? You lost or something?"

The driver offered a single finger and ghastly grin, exposing missing sets of upper and lower teeth in perfect line with that horrendous scar, "I ain't your mate, pig!"

As Dave struggled to pull himself upright in the seat, the sports car screeched into motion, ignoring the red light and causing the two cars crossing the junction to slam on their brakes, skidding on wet Tarmac but thankfully missing each other.

"Did you see that nutter?" Dave asked rhetorically, already leaning forwards to switch on the klaxons and blue lights, as Tom accelerated after Scarface.

"Yeah, thanks, we know!" Tom cursed under his breath as he hit the Rev limiter, changing up, the car lost vital seconds as the bandit hit the bend onto the dock road.

The Honda slid to a sparking crawl as the front tyres shredded, the driver's door opening.

The officers scrambled over the low wall, gaining on Scarface as he took the steps three at a time, heading across the rubbish strewn common area towards the flats across the way. Other sirens closing in on them.

"Second floor, Tango 1-2, can you enter estate from rear?"

Their target slowed, entering the only flat with the lights still on in the run-down tenement.

A short hallway, the one living room at the rear dimly lit. Dave pushed open the bedroom door, left from the hall, empty. Bathroom, right, nothing either.

"Police!" As the living room door was pushed wide, revealing two middle aged women sitting on the sofa, one comforting the other as she trembled, hand against the coffin on trestles in the centre of the small room.

The trembles increased as she looked up in anger and grief, "You lot just can't leave him alone can you?" She spat, "Even in his bloody coffin you're hounding him! Better off dead, at least he's out of the reach of you bleedin' bizzies! Get the hell out! Get! Out!" She screeched.

Puzzled looks on the Officers' faces as Dave edged forward, still keen to explain and apologise.

His eyes flickered unbidden to the coffin.

"Delta Tango One Four, cancel. Repeat cancel, suspect driver made good his escape, no trace here. He's gone. One Four, over and out."

"Dave? What you doin', mate, he must still be in here somewhere?"

Dave remained in the centre of the room. His eyes now riveted to the open casket.

The obviously very deceased occupant grinned back at him through a badly scarred face and four missing teeth.

'Scramble':was used to clear the air on radio, usually when there was an urgent job or pursuit so everyone listened and made to back up, also nobody else would talk over you.

'Talk through': meant everyone in your area could hear what you were transmitting, not just the radio operators, saved time relaying messages in a hurry; normally you could only hear the control room not what other patrols were transmitting.

'Bailing': when a car thief left the vehicle while it was still moving.