Do you remember when snow meant something different? 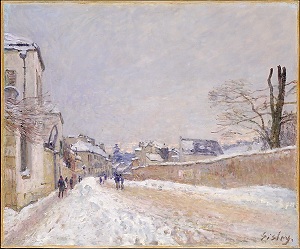 It started snowing on Boxing Day 1962. I was a bit disappointed it didn't snow on Christmas Day, but pleased to see the big, white flakes drifting down. It was magic to go out into the garden and crunch through the snow and see my footprints in the clean white. But it went on snowing – sometimes flakes, sometimes little round balls like hailstones. When our cat went out in the snow, he did a big leap and disappeared, then did another.

It was very cold too. When we went for a walk to the pond in the centre of the village, we needed to wear hats, boots and gloves. All the same, my nose and hands froze. We watched the ducks swimming round and round in a circle of water left when the rest of the pond had frozen. When they flew in and tried to land on the ice they slid. We watched and laughed.

However, it wasn't such fun when it kept snowing. Icicles hung from the roofs of houses – not just little fringes but big sheets of ice. Cars slid on roads which were covered with inches of snow that had turned into ice. When school started again, I walked two miles in snow which was so deep it came up to the tops of my wellies. My brother tried to go to work on his motorbike and told us he'd ridden along the tops of hedges, because he couldn't see the roads.

One day, somebody decided to clear our road. He went out with a shovel and started cutting big blocks of ice. Before long, everybody joined in. We cleared snow and ice and built big mounds along the edge of the pavements. My brother said he'd build an igloo in our garden. He collected big lumps of ice and placed them in a circle, leaving a space for the door. I helped him build, bringing slabs from the piles along the roadside. Each row the slabs got smaller, with bigger ones round the doorway. By the time he'd finished we had a splendid igloo.

My parents said it had been colder in 1947, when they were still short of things after the war. I didn't really believe them, because the TV news talked about the sea freezing. That doesn't happen often. The snow thawed in the end, leaving dirty water on the pavements and roads. It was March by the time it went altogether and everybody was glad to see the spring.