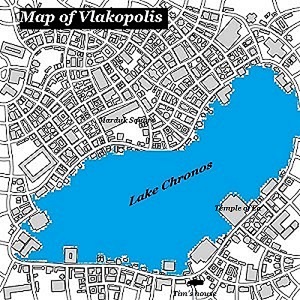 Hi. I'm Timotheus, Tim for short. I'm 11. I live in Vlakopolis, the nutcase capital of the world. You can see it on this map made by Professor O'Leary's bot. I live with my family near Lake Chronos, the big, spooky water in the middle of town. We're right across from Marduk Square, where City Hall is. I marked my house on the map: my teacher liked it, and I got an A in Geography.

I didn't say anything to my teacher, Ms Zimudar, about the spooky part. I didn't call Vlakopolis the 'nutcase capital of the world', either. I'm not that dumb. My Aunt Neti says, 'Grass don't grow under that kid's feet,' and I guess she's right. Aunt Neti usually is.

Grass don't. . . er, doesn't grow anywhere in Vlakopolis, though. We live in Mesopotamia. About 150 miles north of Nineveh. We're lucky to have water – it comes from artesian wells. I know about artesian wells because we learned that in Geography, which is my favourite subject. We don't get our water from Lake Chronos, because like I said, it's way spooky. And that's what I want to tell about.

Nobody goes too close to the edge of Lake Chronos, normally. In fact, nobody even puts a toe in that water. It's that scary. I say 'normally'. Once a year, when the Mayor has to lead the big god procession and shake hands with Marduk, the boss god – well, not really Marduk, nobody's ever seen him in person, just his statue in City Hall – he has to float a decorated paper boat in Lake Chronos. Believe you me, he looks plenty nervous about it. You should see how careful he is when he sets the boat down, so he doesn't get even one finger wet. I don't know what he thinks will happen to him if he gets Chronos water all over him, but it must be pretty dire. He has to stand there and wait until the boat disappears, which is usually does somewhere in the middle of the lake. Until then, he looks just like Niki Mukannishum when he has to go to the bathroom and Ms Zimudar makes him wait. When the boat disappears – like it always does, with a little ping!, the Mayor hotfoots it out of there, just like Niki Mukannishum running to the boys' room. It's kind of funny, but I don't dare laugh. None of the grownups laugh. They just look all solemn and stuff.

Can you keep a secret? I'm not sure I believe in that Marduk stuff. Oh, I know he's the boss god, and he had a big argument with Ea, the river god, and that's why the river went underground. And I know all about the gods and their pancake parties, and the Big Flood and Utnapishtim and all that. But seriously, people: does that even make sense? But I never say anything in Sunday School, because I don't want to get Mom and Dad and Aunt Neti in trouble. I always get an A in Religion, too, because I have a good memory. But if Geography is my favourite subject, Religion is my all-time least favourite. It's boring, even if I do get to sit next to Kiki Peshgaldaramesh, who is about the cutest girl in Vlakopolis.

Mom and Dad don't want me to play near Lake Chronos. They're afraid I'll fall in, or something. But when they're at work, and only Aunt Neti is there to babysit, I sneak down to the lake shore and pick up stuff. I'm always finding cool snail shells and stones and stuff. I think Aunt Neti knows, but she doesn't say anything. Aunt Neti is cool, for a grownup. But even she stays away from the lake unless it's a major holiday.

There's one other time when crowds come to the lake, though. It's after a big criminal trial. Not always: just when the criminal is crazy brave. Or maybe just crazy. Like last week.

There's one way Nestor Balashi could get out of being a sacrifice, though, and he took it. See, if a condemned criminal is willing to swim across Lake Chronos, from Marduk Square to the Temple of Ea (see the map), he'd be home free. Only if you remember, even a paper boat never made it all the way across Lake Chronos. Sometimes condemned criminals tried it, anyway. I don't blame them: being picked up with hot iron and thrown into a flaming pit doesn't look like a lot of fun. But every time a criminal swims across that lake, the same thing happens to him that happens to the paper boat: ping. And that's what happened to Nestor Balashi the other day.

I saw it, by the way. I was standing by the lake shore behind our house, watching. You could hear the people cheering in the square, all the way across the lake. I put my hands up over my eyes for shade, so I could watch. I hoped Nestor Balashi would make it. But he didn't. But I did see what happened when he disappeared.

Yeah. He went ping, and poof! But I was looking hard, and just before Nestor Balashi went ping and poof, the funniest thing happened. The air around him went all wavy, like a heat shimmer. But it wasn't hot that day. And on the edges of the heat shimmer, there were little bands of colour, like rainbows. It was the coolest thing. I remember feeling bad because I thought it was cool: after all, it might be the last thing Nestor Balashi ever saw in his life. And then poof, he was gone. I was so sad I didn't even stay to watch the fireworks. I just went inside and did my Geography homework.

But this morning, something really neat happened. And it made me wonder even more about Marduk and Ea and all those pancake-eating gods and stuff. I'm wondering because of what I found on the lake shore this morning, when I snuck out before breakfast to take a walk.

There was a bottle on the shore. I picked it up. It's made of clear glass – I've got it in my room now. I'm hiding it under my bed. There are letters in the glass, around the middle, but I can't read them. They look like this:

At first, I thought it must be a message from the gods, in some mysterious god-writing. But then I opened the bottle. There was a piece of cardboard inside. I figured the gods wouldn't send snail mail. They certainly didn't need to pay postage, and there was a stamp right on it, with the picture of some lady I never saw before. The writing part said:

Having a wonderful time. Wish you were here! Come on in, the water's fine!

I was really happy about this, as you can imagine. Nestor Balashi was somewhere, and he liked it. I cheered right up. From the picture, I guess the gods forgave him for that cow.

I'd love to show the piece of cardboard to Mom and Dad, but I'm worried they'd freak. As you can tell, the penalties for blasphemy are pretty stiff around here. I might get up the nerve to show it to Aunt Neti. She's pretty cool. Maybe she knows where this place in the god-realm called Brighton is?

I don't remember it in from Sunday School. 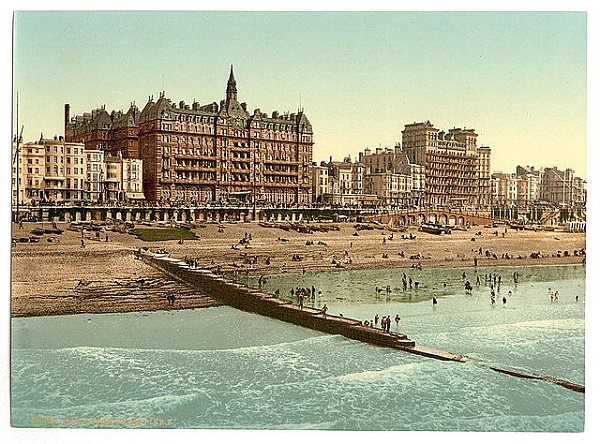