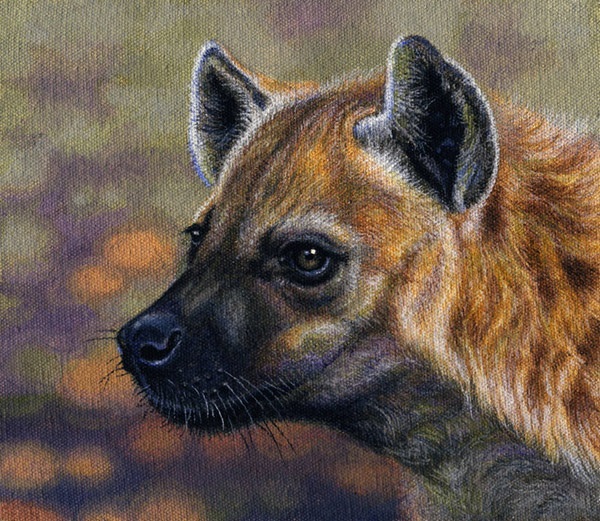 It's been long in coming, but here it is at last! A Spotted Hyena, Crocuta crocuta. The scientific name perhaps is derived from the Crocus, a yellow flower, signifying this hyena's yellowish fur. Spotted Hyenas are Africa's second largest mammalian predators, only lions beating them. An adult female hyena can reach a bodyweight of 90 kg/200 lbs! Hyenas have jaws even more powerful than those of lions, and there is some rivalry between the two species in Africa.

The first members of the hyena family, known from about 25 million years ago, were small and much like civets in appearance. Indeed, there are still similarities between hyenas and civets, particularly their digestive systems that can cope with weird foods – poisonous critters and fruit in the civets, and things like bones, teeth and fur in hyenas. Despite their dog-like appearance, hyenas (and civets and genets) actually belong to the cat branch of the carnivoran order. The first civet-liked hyenas occurred in Africa as well as Eurasia. Only about 10 million years ago did the larger, bone-crushing types, like the present-day hyenas, evolve. The aardwolf split off from the other hyenas prior to this point.


The big hyenas were very successful and occurred abundantly in Africa, Asia and Europe. There was even a slenderly built, running hyena which made it into North America! As for the spotted hyena, it and its close relatives were widespread in Asia and Europe, one form being the Cave Hyena, which was even larger than the present-day ones, and lived alongside cave-dwelling humans during the ice ages. Another prehistoric species was the Pachycrocuta brevirostris, the largest species known, which reached the size of a lion!


Sad to say, many of these species went extinct about the time humans arrived on the scene; they may indeed have had something to do with it. The American (and Eurasian and African) running hyenas vanished, as did the cave hyenas and all the other hyenas of Europe and Asia – except for the striped hyena remaining in some parts of Asia. The spotted hyena also suffered a reduction of its range in Africa, disappearing from north of the Sahara, as well as from the southernmost parts of Africa. Here in South Africa, the species only remains in large nature reserves. 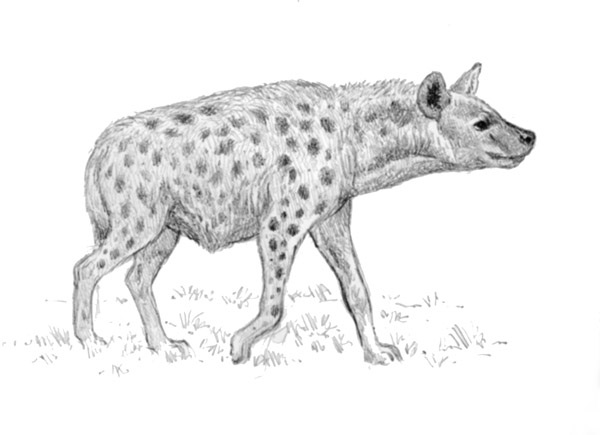 Spotted hyenas are highly unusual and fascinating creatures. Foremost is that they are among the mammals, the greatest exemplars of female liberation! This goes to the point where females and males are anatomically almost indistinguishable – except that the females are bigger and more aggressive. It starts even in the womb, where baby girl-hyenas are already exposed to doses of male hormones much greater than those of the males themselves. This makes them extremely aggressive right from the start. If a spotted hyena mother should have two girl cubs, they will typically fight, the stronger one often killing the weaker. But if she has two boys, or a girl and a boy, they tolerate each other.


As a female hyena grows up, the male hormones continue their work, most astonishingly in reconfiguring her sexual anatomy. Her clitoris enlarges and becomes very similar to the penis of the male, while she also develops a false scrotum, with no actual function except for looking like that of the male. Her clitoris can also become erect like the male penis. Access to her uterus only comes through this pseudo-penis, and she absolutely needs to cooperate with the male in order to achieve copulation – this makes her effectively un-rapeable. But she also gives birth through this pseudo-penis, which must be a very painful affair! Because of this genital mimicry, many African peoples and for some time even western scientists have considered spotted hyenas to be hermaphrodites.


In hyena society, females are dominant; one female leads a clan, and all the females rank above all the males in dominance. In fact the males being traditionally submissive in hyena society, is likely the reason for female genitalia resembling those of the males! Hyenas appease each other by presenting their genitalia to each other, sniffing and inspecting them mutually. This is a very powerful signal of trust and submission, placing their most vulnerable parts within reach of each other's jaws. These acts of appeasement are vital considering the highly aggressive natures of especially the females, thus forestalling conflicts not just between males and females, but also between higher-ranking and lower-ranking females of the clans.

Another way in which hyenas have been misunderstood until very recently, is in their feeding behaviour. They've gained an unwarranted reputation as 'cowardly' scavengers. Now personally I have a problem with this since scavenging is hardly more cowardly than any other kind of feeding behaviour – we don't consider elephants of buffaloes cowardly for eating grass and leaves, do we? Actually to scavenge, hyenas need powerful digestive systems and immune systems. They're rarely affected by diseases, and for instance by eating animals that died from anthrax, manage to remove these pathogens from the environment without succumbing to the disease themselves. Just like vultures, they do majorly important work in clearing away natural refuse – and in some regions waste produced by humans (in the extreme, even human corpses) as well, with human communities actually encouraging them to do this. Spotted hyenas have the most powerful teeth and jaws of any mammalian land-predator; they can crunch up even the thigh bones and skulls of elephants, rhinos and hippopotamuses – no mean feat! The bones pass through their digestive systems, most of the nutrition in them being absorbed. They can even digest teeth! They do on occasion sometimes regurgitate the most indigestible bits. Out the other end comes their highly recognizable dung, typically white or ashy-grey because of the calcium from the consumed bones. This dung is often deposited on middens used by the entire clan, which plays a role in proclaiming their territory. In regions where hyenas consume human garbage, there are sometimes some interesting items in the dung such as bits of rope, soles of shoes, iron nails, tin cans, and pieces of newspaper. In Hwange National Park in Zimbabwe, the local airstrip needs to be specially cordoned off to prevent the hyenas from snacking on the rubber tyres of the airplanes!


Even in this scavenging behaviour, hyenas do show initiative and fortitude. They can find much carrion with their superior sense of smell. But they also observe the actions of other scavengers like vultures. What they also will do, is to actually chase away lions and other predators from their kills – numerical superiority in many cases giving them the upper hand.


But what has become recognized only in recent decades, is that spotted hyenas are indeed effective hunters of living animals. Indeed, they will target large mammals like zebras, wildebeests, giraffes and other large herbivores. Here they will cooperate as a group, bringing their quarry down with multiple bites to weaken it. They can run at a speed of about 60 km/h (which is almost 40 mph) for several kilometres at a stretch, and can thus even run down many antelopes. When their prey is weakened enough and slows down, they will start tearing it to bits and eating it while it is still alive! This does seem very cruel, and is a strategy also used by hunting dogs (and outside of Africa, wolves as well). But the suffering is usually of brief duration, a prey animal dying rapidly of blood loss and trauma after being brought down. Hyenas eat very quickly, and an individual can put away as much as 15 kg/33 lbs of meat at a single meal!


The hunting behaviour of spotted hyenas has not been much appreciated until recently, because it happens mostly at night. Hyenas have little trouble hunting in the dark, having vision comparable to those of cats in terms of light sensitivity. They also use their excellent senses of scent and hearing to track down their quarry.

Yet another peculiarity of spotted hyenas, is their surprisingly human-like voices. The call mostly heard in hyena country is in fact not laughter, but a long, ascending 'whoop'. This is a territorial and dominance call mainly given by the leading female. The laughing sounds are mostly uttered by several individuals in a clan; this may happen during the excitement of a hunt, or when individuals come together to greet and appease each other. These laughing, chattering and cackling sounds have given rise to legends among local peoples here that hyenas commune with witches, being their 'familiars', and even casting incantations upon these witches' victims. Belief in witchcraft is, even today, still prevalent in many communities, and here in northern South Africa this superstitious suspicion still claims many unfortunate (human!) victims each year.


The Future for Hyenas

All in all, spotted hyenas are still the most successful large predators in Africa, significantly outnumbering lions, but they, too, are in jeopardy. Wherever humans are keeping livestock, hyenas are feared and persecuted, often with poison campaigns which decimate not only the hyenas, but lots of other more innocent predators and scavengers to boot. Hyenas definitely have an image problem among humans, not getting the respect that, for instance, lions do. Nevertheless, they are indeed very robust and adaptable, and do learn to flourish alongside people in some regions. They are present in all major game reserves of the African savannahs. Where tolerated and given leeway to live their lives, they thrive, and at present can be considered reasonably safe from extinction – but this will depend on us still giving them a break and a little bit of space in which to do their thing.