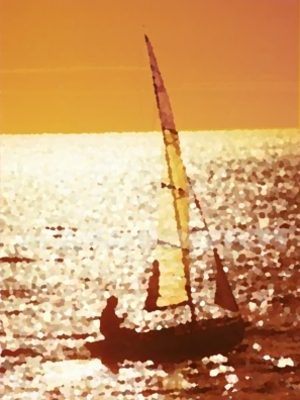 Jeremy knew the end was coming. There was talk of restructuring, downsizing, even relocating out of London, but all the fine words meant the same thing – he would be out of a job. He spent his last week sitting at his desk, with its view of the Thames, rewriting his CV. His official job title was senior management consultant and he claimed an excellent track record. In practice, he spent his time travelling in the UK and Europe, telling companies and government offices how to improve their performance. In meeting rooms, he stood at the front with a flip chart or a white board, persuading the employees of the merits of blue-sky thinking, or the need for step change. He was good with pie and bar charts and could talk about the positive financial climate, the possibilities of growth in the Far East, and how to cope with change.
The last day in the office, he hosted a get together in a local pub for his colleagues. He drank rather too many gin and tonics and told stories about his managers, showing them as foolish or incompetent. After rolling back into his office, he collected the few personal things from his desk and put them in his briefcase, along with a paper copy of his CV and a memory stick. Then he left.

As he was sitting on the train back to Brighton, Jeremy looked at the photo of his wife and daughters he'd kept on his desk and felt sick. There was Gloria, in a pink hat that looked like a lampshade and a dress that was too tight. Beside her stood Cynthia, who'd just passed her A-levels in English Literature, Media Studies and Drama. She was a lovely girl with straight light brown hair and a big smile. However, her education, at a private school in Sussex, had cost a fortune and now she was expecting him to fund her degree in Performing Arts. Next to her was Tamsin, who had scowled into the camera at the last minute. That was typical of her. Although she was as clever as her sister, she was a bit of a rebel. Her favourite activity was riding and the bills for stabling her horse were enormous.

Once Jeremy got off the train, he started to walk the short distance home. Gloria had wanted the BMW for one of her charity outings. He'd recently bought a small, white painted house in one of Brighton's nineteenth century terraces. The mortgage had been eye-watering. He knew that, once he stopped working, he'd be broke.

He stopped walking and thought of his seminars on How to Cope with Change. The recommendations had seemed so obvious when he'd written them on a white board: Review Your Circumstances, Consider Your Options, Be Positive, Build on Your Strengths and, last but not least, The Wild Card. He'd talked about people who had undertaken total career changes, like the man who'd moved from hedge fund management to aboriculture.

Jeremy turned and walked down the road to Brighton beach. There was something satisfying about crunching across the pebbles, and the rhythm of the waves on the beach was calming. However, the real reason he was attracted to the sea was because it spoke to him of finality. It put a stop to all the frenetic human activity of the city. He took off his shoes and socks and paddled in the little waves as they curled on the stones. What he wanted was a total change, a wild card.

He remembered how he used to love messing about on sailing boats. Sailing brought him in contact with the elements: the wind, the tides and the sea, with its knack of changing from blue and smooth as a lady's dress, to a whirl of white and grey. It required intellectual skills like understanding navigation, physical skills like hoisting a sail, and a decent level of physical fitness. At last, he made a decision. He would wander to the Marina, find someone who wanted a hand on a boat going round the coast – Scotland or Ireland would be ideal – and simply drop out. With a series of long strides, he covered the distance back up to the Esplanade. He stopped at a litter bin and threw away his CV and memory stick. He was free.