It had been a good day. Her usual begging pitch outside the supermarket had been blagged by that smackhead and his mutt and she had grumbled as she was forced across town, jostling with the Russians and Poles on Church Street, giving up and trudging uphill to entrance of the Anglican cathedral.

Huddling into a corner by the massive gates, putting on her saddest face she had pleaded with tourists and locals for a few bob. Six hours later, with nearly seven quid in her socks, she'd searched the bins behind the restaurants on Berry Street, rewarded with a slice of untouched pizza, half a tray of some sort of curry and a whole pitta bread.

Stopping at the offie she'd splurged three quid on a bottle of cider before making her way to the cardboard shelter she called home.

One hand pulling the damp sleeping bag round her shoulders, the other dipping bread into the curry, Becky felt the air chill further as the shadows seemed to deepen.

She risked opening the flap of the box a little and shouting, "If that's you, Jamie, you can bugger right off, nothing for you." She scowled remembering how he'd stolen the half can of lager whilst she slept a few days earlier, "You'd better have a drink for me if you're showing your ugly mug around here!"

Just to be sure she tucked the almost empty cider bottle deep within the folds of her mouldy sleeping bag, cursing the broken zip.

No reply. She went back to her meal, keeping the pizza for tomorrow. Sunday, she thought it was, slim pickings in the city centre and she may have to go without.

She'd better keep the cider too, just in case?

She shook the bottle in the almost pitch blackness, not that much left, shrugging she retrieved it and emptied the remainder in a few short gulps.

The final mouthful was spilled as the razor sharp talons on the grey hand easily shredded the cardboard, her sleeping bag and her throat. 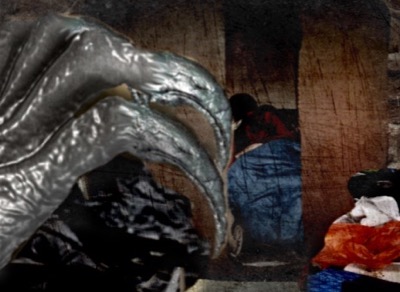 "Tell the boy to leave us now," the frail voice had the same effect as nails on a blackboard but Joseph readily agreed, poking his head from the doorway he shouted to George to make his way home, finish his studies, he'd be home for supper.

"And George!" He added softly, "Ma's making your favourite, rabbit stew, leave some for me, eh, brother?"

"Thank the Gods!" The crone grumbled," the child reeks of clergy, fools that they be!"

Joseph bit back any defensive remarks and attempted to get a better view through the gloom at what Old Mary's hands were busy with.

As if reading his thoughts, she held out one skeletal palm, showing three small bones etched with similar markings as those on her threshold.

"Your future paths, Master Williams. Each so very different but each so easily within reach for you on this very day."

He gave her a quizzical smile, half turning towards the door, ready to leave the mad woman to her mischief.

"The first a life of drudgery and boredom, your father's works, a long life, yes, but a damnably boring one!" She gave a sound – half grunt half laugh, "The second equally long, equally dull, a lowly clerk in a shipping company no less, Whitby mediocrity, never travelling to the destinations you spend your days dreaming of, merely names on dockets and crates, bah!"

She held out the smallest bone, a wren's thigh perhaps? "But the third path, oh my lad, such a bright life, riches, high esteem, even the travel you long for. Shorter, maybe than the others, but nothing that can't be bought, even time to enjoy your wealth can be bargained for. All three within reach. You only need to choose your way."

Again she held out the three. Joseph no longer saw madness or senility in her eyes, only certainty and promise.

"The third obviously, but you say a shorter life?" He squinted at the bones trying futilely to make sense of the intricate, minute carvings. "How...?"

"Ah my boy, the devil, as ever, is in the details! Tell me, what would you give to have all your hearts desires, wealth, title, property, women? What would you bargain for such a life?"

"I think I'd give anything I own for such a future!" The words were out before he realised.

"A rather childish offer, boy! You don't even own your own pot to pee in!" Again that grunt of a laugh, "Balancing the scales takes a lot more, believe me."

"Scales?" Joseph was at a loss.

"The universe is a great balancing act. For every good there is evil, every act of bravery one of cowardice, every kindness balanced with wrongdoing. Always been the way, always will be! So your life in the light, your full table and bulging purse must be paid for by a life of hunger, a life in the darkness and shadows, your good deeds weighed out with acts of barbarity and cruelty" She pointed a bony finger at his chest," The simple fact that your heart's desires may come at a price you're unwilling or unable to pay."

By now Joseph was entranced, thoughts of fulfilling his dreams outweighed any concerns that this old woman was genuine. If she could pass on some knowledge of how to obtain his aspirations, he would willingly follow her guidance and the consequences be damned!

"Be sure, my boy, for once a deal is struck there will be no backing out!"

Joseph nodded his agreement saying simply, "I want everything."

"So be it!" And with that she cast the two rejected bones into the hearth, the flames turning black as they were consumed.