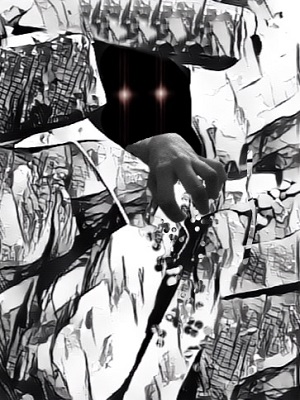 All building work had ceased some three days previously when the diggers had unearthed the first bones. Undoubtedly human, the pile grew steadily into the heat of the summer afternoon as the council, police and later forensics officers commandeered the site.

Neighbours were interviewed as the door to door investigation sought to uncover any unusual activity.

One such neighbour, one of the strangest human beings I've ever interviewed, sat in his fetid flat, curtains drawn against the sunlight. Empty pet cages lined the room, the smell unbearable as the formatted questionnaire was ticked off.

"Have you noticed anyone in the building site after the workies have left for the day?"

"Only the grey people, but they've always been here." The old man gestured knowingly towards the filthy curtains.

"They live underground. Come out to feed. I leave them animals and whatnot, dogs, cats, they seem to like rabbits best, leave me alone if they're fed. Cause all kinds of problems for you guys if not, missing persons and whatnot, terrible stuff happens if they're not fed properly. Been here forty-two years now, not one bit of trouble since they took my first dog, collie she was, lovely girl, can't remember her name now, things get a bit confused you know – names and whatnot, I don't name them any more, just food, that's all, food for them now. But they leave us alone. Where are my manners? I forget things so easily these days. Would you like a cup of tea?"

We made our excuses and left, gulping in fresh air and tearing up the waste of time questionnaire, bloody old loon. Note to chase up Social Services, get him some help maybe.

Summer continued. The boffins did their work on the bones.

Finally the remains were dated (probably late seventeenth century give or take a decade) and removed for reburial – forensics happy that there was no apparent foul play – the bones merely washed under the main road on a sea of mud disturbed from the graveyards of the ancient cathedral which towered over the building project which now resumed with gusto.

Council engineers drilled down, finding the original roadway foundations intact but one of the many catacomb tunnels had collapsed, letting in rain water and turning the lower burial grounds to thick but mobile mud. Hundreds of skeletal remains were reinterred on hallowed ground, spirits blessed and given a more stable resting place.

Still it took another three days to check the other tunnel entrances remained bricked up and secure. Natural tunnels had been there for eons, man-made labyrinths added more recently. Most dated from the slave trade, some from the Napoleonic wars, others as recent as the nineteen forties when black marketeers used the maze of tunnels to smuggle goods from the docks to the city's hungry residents.

The three of us briefly shook hands with the engineer, a very jovial, very rotund middle aged man and made our way underground, the air becoming colder with each step. Hurried glances at the rough hewn ceilings as the weight of centuries bore down on our heads.

Fifty feet down and the dragon lights hummed into life, one million candle powered beams failed to penetrate the absolute darkness for more than a few yards as the tunnels gradient increased, ever downwards. Hurried breaths glistened in the ice cold air as our feet crunched gravel.

Actually made up of millions of ancient sea shells, fascinating really, our guide cheerfully informed us, the whole area once part of some Prehistoric sea bed.

Another bitterly cold hundred yards and we were at the problematic entrance to one of the deep tunnels. Ancient mortar and sandstone blocks littered the floor, a hole the size of a large man loomed blackly.

"Nah, apart from batons mate – why – do you think there's a wild dog or something got in?" Phil was never a dog lover, hated the things after being bitten by a stray some years ago.

"Nowt got in, son," a cheery nod towards the rubble, "but something big and powerful certainly got out!"

The chill seemed to deepen as the now obvious outward pattern of the rubble became clear to us. My hand unconsciously closed on the handle of my Casco, the dragon light still useless in breaking the pitch black that waited for us within.

"Probably got in down by the river and had to force its way out, no way of knowing where it leads without actually going there!" The smile was becoming annoying.

We collectively held our breaths as we ducked through the hole, lights playing madly on the dripping walls, hearts beating wildly as we took those first steps into the darkness.

The tunnel narrowed, forcing us to move in single file, heads bowed even though the ceiling was still several feet clear of our helmets.

Mr Cheerful waved us on, his bulk limiting any further access. He'd wait at the entrance, just shout if we got into trouble and he'd fetch help he beamed, or radio him once we got to the river, happily settling down and cheerily unwrapping a pasty he'd miraculously produced from his tight overalls.

The passageway was indeed ancient, whether man made or nature hewn, the circular tunnel unwelcoming. The cold and dark jangling our nerves as each crunch underfoot brought fresh shivers. Ahead only blackness, no obvious signs of an animal, no droppings, food or bedding, but we had to venture further, make sure no one was trapped or the tunnel wasn't dangerous or flooded further down.

Two hundred yards in. My breath crystallising as it hit the icy dank air. The dragon gave a faint 'plink' and the brilliant beam dimmed to amber, then went out. The utter blackness rushed at my eyes, I heard Phil curse behind me as another plink welcomed the darkness.

Eyes strained in the complete absence of light. All sense of perception vanished, vertigo fought with claustrophobia as we stood deathly still, our breaths now deafening.

Phil touched my shoulder making me jump. "Go back or move on mate? What do you think?" His whispered words feeling like ice shards on my neck.

My reply was stillborn as the sound of heavy footsteps came from ahead out of the dark. Multiple feet crunching hurriedly towards us, closer and closer, totally unseen but becoming ever louder. Unseen steps accelerating, racing now.

The temperature plummeted as the advancing wall of noise hit us with a physical jolt. Icy draughts moved over us in time with the unseen footfalls. The tunnel too narrow to allow anyone or anything to pass but eerily, chillingly, the footsteps we now behind us, fading away towards the entrance.

"Now what the.." Mike started but thought better, embarrassed that he may have let his imagination and the darkness get to him.

Twelve minutes but an eternity later we had retraced our steps, each yard fought for in the absence of light. Finally glimpsing the dancing torchlight and the rubble strewn entrance. That hole now a beacon as we hurried out of the black.

Mr Cheery gave us a smile as we climbed out, shivering and pale. Three dragon lights burst into life unbidden, flooding the chamber with gorgeous brightness.

Phil held out his hand, brown knuckles white with cold and stress.

"I almost grabbed one of them!" Fingers opened to reveal a scrap of ancient cloth, so old the edges were crumbling in his palm. Grey dust fell from his fingers as we watched. Then it was simply gone, motes in the torch beams.

"There's nothing down there. Brick it up. Do it properly. Now let's get the hell out of here I'm freezing."

I shuddered again at the thought of the entrance being open for another three days, " Get them down here now eh? We'll authorise the overtime, see you later lads."

"Where are you off to, bud?" Phil obviously wanted a debrief, some clarity on what we'd witnessed.