Well, we did say 'change one thing about the past.' 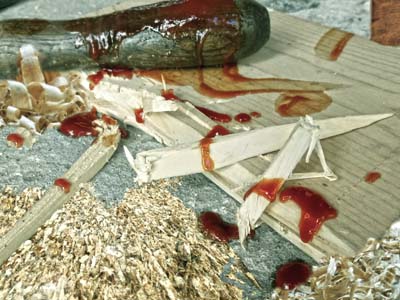 Sweat dripped from his face, tracing its way through the sawdust in his beard, and hit the dirt floor unnoticed as he worked.

Again and again he forced metal against wood. The careful marks of his meticulous measurements forgotten as the timber was violently shaved.

His craftsmanship shunned as brute force replaced his usual delicacy, metal cut into wood over and over, each stroke a violation of the once beautiful piece, his mind too far gone to appreciate the irony of this thought.

Blood welled in his blistered palms, his grip finally slipping on the handles. The blade snagged and silence filled his workshop, becoming deafening as his breathing slowed.

Crowds ambled by his doorway, chatting and smiling, hushing each other as they realised where they were, refusing to peek into the workshop and scuttling away to renew their good spirits once out of earshot.

He looked down at his bloodied hands, the tear and sweat stained floor and his ruined work. None of it mattered. Nothing mattered anymore. His life, his Faith, his soul, all totally destroyed.

Destroyed by a casual rumour started by a friend, excuses scorned by his neighbours and taken very, very seriously by his betters.

His life was truly finished. He felt as dead as his wife and unborn child, stoned to death by reason of alleged adultery and an unexplained pregnancy.

The world wouldn't, couldn't, ever be the same again.

Tears came again as Joseph picked up his tools and went back to work.