Words of wisdom from one of h2g2's most highly-respected philosophers. 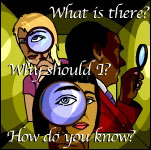 They do say ignorance is bliss. But, if you were ignorant, you might not know ignorance was bliss, and thereby not be blissful. However, if by virtue of not knowing, one was, indeed, in a state of blissful unawareness, would one be blissful in such a state.

Initially the onlooked viewer of this, may assume 'yes'. However, if on examination one applies a closer gaze, it could be argued, that due to their state of being blissfully unaware, they are, indeed, unaware of the blissfulness within which they sit, and therefore are unaware that their state is already of bliss.

Similarly, one may assume that their state is simultaneously unaware of their blissful nature of its existence, and, similarly, at the same time, unaware that there is a state of blissfulness that they could attain to achieve; irrelevent of whether or not they are, at any given time, already to be found existing in such a unaware state of blissfulness.

However, without knowing there is a state of blissfulness, they may be unaware likewise that the opposite state can exist, so in net effects can exist in the seemingly contrary state of both blissful and non-blissful, at the same time; in effect, they are in bliss limbo, both unaware yet potentially also non-blissful, and yet, thereby unable to obtain the blissful state, due to their unawareness of both the state of bliss, and the state of non-bliss.

Further quantitative examination and meta-analysis would be deemed necessary to quantify the relative contribution of each to the other, and detach confounding factors in either state, each state singularly, and the limbo state; and further address whether both states can successfully coexist, creating a bi-blissfulness of being both blissful and non-blissful, in the coexistence of unawareness. I think...