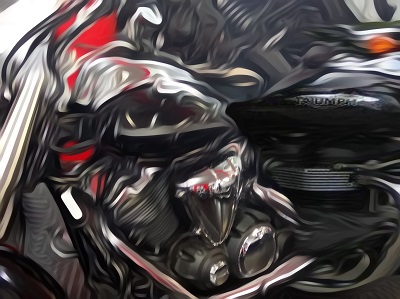 I don't want a pickle, but over the last few weeks I have had a few picklish situations to deal with.

Firstly...run Spot run turned into run, ping, ouch limp as my tendons decided that jogging wasn't as much fun as a bike ride and divorced themselves from my calf muscle.

Keeping fit is bad for your health. Bad. Very bad, if you'll excuse the Trumpism.

Secondly, still not fancying said pickle I just wanted to ride my motorsickle..and there lies another pickle flavoured rub.

Zafod the Triumph is due for retirement so I've been trawling websites looking for his successor.

Ah. Oh dear. They're not making model A anymore.

By this time there appeared to be forming a subtle theme, I figuratively munched another pickle, why did your website not mention the apparent cull of cruisers?

Yes, we do have a C, the last one in fact, beautiful plumage.

No, it's burnt gold.

Burn gold all you want mate, you still won't get an ugly beige puddle.

Any different colours? (now, I'm not normally prone to choosing bikes or anything else purely by colour...but beige!)

How much for a respray?

When I'd recovered from the heart attack inducing sum I said farewell and begged a lift down the motorway to see Mr Harley and Mr Davidson instead.

Harley – The home of pickles and sickles....even though Arlo actually rode a Triumph.

Three models roughly in my price range with Zafod as part ex. Two were single seat bikes. Not practical but very pretty. The other basic but pretty and financially do-able. Loads of after-market bits, very expensive but very pretty. Engine upgrades galore, stupidly expensive but due to being mostly internal, I couldn't comment on their prettiness, but I'm sure they were.

Less pretty by far were the few beans they decided poor Zafod was worth against the American pretty boy. (Throw them in the garden and maybe, just maybe, in the morning there'd be...ok still a handful of beans.)

Finances not beyond my means but rather insulting to the trusty English steed. The only suggestion – sell Zaphod to a privateer Brit appreciating biker and come back with cold hard cash for Uncle Sam. Keep the beans and my English pride.

Not wishing to reenact one of the battles so frequently written about on this very website, I said I'd think about it and took the very pretty glossy brochure home.

Limping around the house I decided to keep him, non-magic beans and all, spend a few hundred quid and get him back to his prime.

Still in a pickle and still very much unable to ride my motorsickle, I trundled off to my next doctor's appointment. Which happened to be close to a bike shop.

Japanese plastic gleamed all green and inscrutable in the windows. The dreaded race bikes snarled and screamed in fiendish workshops at the rear. Day-Glo leathered mannequins posed alongside the inscrutable mainly green machinery.

We went in just to be nosey and kill a few minutes...and there she was, a big, shiny new Japanese cruiser.

Much, much cheaper than the Yanks, as pretty as the Triumphs and not beige at all. (and definitely not Day-Glo green either).

Sitting gingerly in the gunslinger saddle, it felt, well, right. Her dulcet tones promising power and grace, like a ballet dancer singing in an Aikido dojo.

Apparently the Japanese don't value British bikes in beans and I was offered a very fair price for Zafod, bravely resisting the urge to bow to the not very Japanese salesman.

Once the leg is healed enough for a test ride, I will be turning Japanese and, pickle forgotten, get back to riding my new motorsickle.