This month's challenge has been carried out by professional idiots. Do not try this at home.

The Devil Made Me Do It – Maritime Division 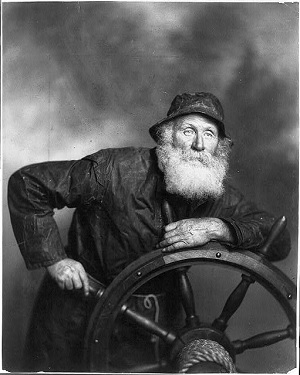 I have often been asked 'What is the largest boat you have ever commanded?'

I have been 'messing about in boats' since my arms became strong enough to handle a pair of oars, probably when I was about age 5 or 6 years old. Over the years, I have risen from deck hand to navigator and then to captain on several different boats. I have always been reluctant to answer that particular question because it was clearly the work of the Devil. Many years have passed, and we are well past the statutes of limitation (the number of year a person can be charged for a crime), so I will tell my tale. Please do not try this at home.

I was living on my sailboat at the time and my now wife and my best friend were visiting on a Saturday night. We were drinking and discussing what we could do for fun on the next weekend. We were young and wild and the thought of going someplace to get totally wasted seemed to be just the ticket! We were old enough to realize that driving home in that condition was a bad idea. About that time the dinner cruise boat that was berthed just across the road from my boat was returning from her evening voyage. She was about 110 feet long, 5 decks high and carried 75 paying passengers. Dinner and the cruise were a fixed fare, but they had no liquor license so it was strictly 'bring your own bottle' for your own enjoyment. We all agreed that this was the greatest idea as we could drink as much as we wanted and only have to stumble across one street to get back to my boat and sleep it off until morning. A fool proof plan – until that Devil got into the way!

We boarded with a bag containing a fifth of each of our favorite spirits. The highest deck was primarily an observation deck above the bridge. We asked if we could have tables moved up there for our dinner. This was granted and another couple asked if they could also dine there and we welcomed them to join us.

We opened our bottles as the boat got underway and soon we were called to the buffet line to fix our plates. After we had eaten they played dance music and we got on with the serious business of emptying our bottles. It was about 10:00 PM I looked over the rail and saw a line of the passengers outside the door of the bridge (the command center of the boat). Hey Mike, I said, it looks like they are giving tours of the bridge – let's go and see. At this point we could still stand under our own power – but just barely. We got into the line and slowly advanced toward the door. At this point I did not know, or care what our actual location was (this would change shortly).

When we got to the front of the line I could see that the captain was letting each passenger take a turn at the wheel and steer for a few minutes under his strict observation. What could be the harm in this?

When the captain asked for the next passenger I stepped up to the wheel and grasped the spokes at 10 o'clock and 3 o'clock, just like you were supposed to do. Mike also came in and took his place next to the captain. 'We need to make a turn to the left', the captain said, 'and head over there' pointing.

I replied '050 aye' (a heading just a bit east of north.) I spun the wheel while watching the compass card. I swear I brought her up on exactly 050, a thing that would be almost impossible for someone on a strange ship – even if they were sober.

After about 5 or 10 minutes I noticed a low white line directly in front of us. It was a sea wall and directly behind it was the immovable State of Florida. We could not go there! I cleared my throat loudly a time or two. No response. I finally said loudly 'I am expecting a helm order!' Silence. I finally turned around and the only person behind me was Mike with a stupid drunken grin on his face.

'Where is the captain?' I shouted.

'Oh, he left a while back. Just told me we should carry on.'

'The captain did not say anything about turning – he might get angry.'

As I spun the wheel through a 180 degree turn I began to realize where we were. far up Ybor channel (a dead end cul de sac of water). I told Mike to get his backside up here and help me spot markers, there were several turns we had to make before we got back into the open bay. About 20 minutes later the captain re-appeared on his bridge and told us how nice it was to have a pair of experienced seamen aboard who could relieve him of his duties for a while.

I did not have the heart to point out that we were both far too drunk to drive our own cars and he had put us in command of his passenger boat.

Fortunately no person or property was damaged in this exploit.