Twelve years later, Luki and Bjorn stood squinting in the sunshine as the gates of the Stony Mountain Institution clanged shut behind them.

Bjorn glared down at the very politely worded Federal letter apologising for their unreturned weapons, the Canadian Government regretting profusely that the assorted axes and swords were just not the thing to be walking around the Provinces with, however as rehabilitated guests of the penal system they were free to buy and register firearms for their personal use.

The paper fluttered away in the breeze as Luki motioned towards the sound of engines. 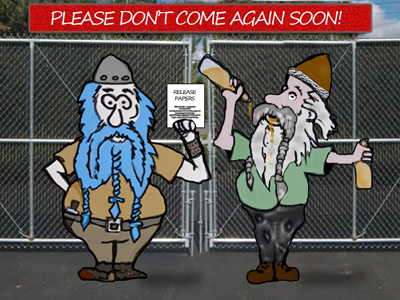 Three valuable lessons the pair had learnt in jail.

The rumble grew deafening as over one hundred bikes rode into the prison parking lot.
The President, another bearded giant, introduced himself simply as Odin (he most definitely was not!) and gave each man a massive bear hug.

The Vikings were ushered into the one truck that accompanied the bikers and were soon speeding away, wind in their beards, towards the nearest bar. There to drink, make merry and plan a full-on invasion of the good old U S of A.

Two weeks later, the Island bristled once more with beards and weapons. Axes and swords now replaced with semi-automatics, hunting rifles and pistols.

Bjorn, beards once more a resplendent blue, stood atop the dragon’s head, looking out over the Needles and into the Atlantic.

"May the Gods bring us fame and good fortune, brothers; may all the American women be goddesses and all their men die fighting!"

The bikers didn't understand a word of the gibberish, but for the most part they drunkenly cheered. A few dozen fired guns into the air, even though they still thought Bottlesson was a loony Frenchy, but they liked his style.

Leatherpants (now one of hundreds who preferred cowhide trousers) screamed his battle cry, took a glug of maple syrup and cast off.

Unfortunately, once in the Davis Strait, Luki totally failed to notice in his latest sugar rush that he had the map upside down again, turning to port the island cruised into Baffin Bay, narrowly missing Ellesmere Island before becoming hopelessly ice logged in the Arctic Ocean. 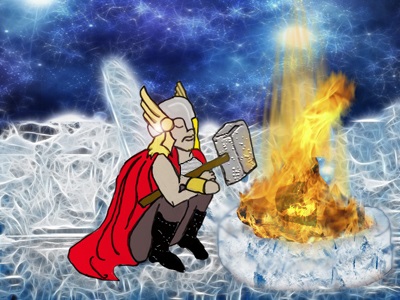 Thor threw his ale into the embers, watched them die until they were as cold as the bodies of two frozen Norsemen, sadly admitting to himself that no one would ever sing the Saga of Bjorn Bottlesson and Leatherpants the Lost.

Then he strolled off to play some cards.