The holiday literature of the past: how unedifying it all is.

Why There Is Nothing to Read This Week 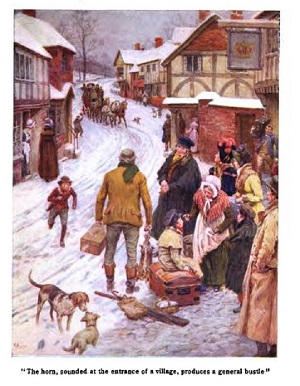 I've tried to find something edifying, uplifting, or even mildly interesting to show you in this column today. But there is a dearth of Christmas-related Stuff that passes the 'no insult to the intelligence' test. All through a rainy, cold, miserable pre-holiday afternoon, I have searched the internet archives in vain for material that will not make your heads hurt. But the Stuff I found was all cutesy, precious, or tasteless. One item came with the caveat by the donor that, 'This may make your teeth ache.' Others? Well, as Elektra put it, there were 'sensitivity issues'. Meaning, I can't publish the kind of language people found fit to set before young people in 1863.

Here are some of the less objectionable things I found:

The mistletoe is still hung up in farmhouses and kitchens at Christmas; and the young men have the privilege of kissing the girls under it, plucking each time a berry from the bush. When the berries are all plucked, the privilege ceases.

Did the girls have the privilege of smacking the young men in the gob? Did they make chalk marks on the doorpost to count coup?

When Chrismus came into the family, Bose smelled at the calves of his legs very suspiciously at first. Neither Yankee nor Dutchman, thought he. What is it? But it was
not long before the black and yellow Greenes became very good friends.

I cannot safely quote any more of this book. Bose is a 'yellow' dog. Chrismus is an African American child rescued by a Union soldier. The Greenes are his Rhode Island family, where his mother, Wealthy Greene, raises everybody. It's a good-hearted book, but the language is fit for no one in the 21st Century. I lie not: the hairs on the back of my head stood on end. You couldn't quote this book in a hip-hop lyric.

The dinner was now served, and the servants were ordered, by Lady Castlemain, to carve for the children. Mrs. Egerton said, she thought there could be no impropriety in the children having half a glass of currant wine each, after their plum pudding, and that she had ordered four bottles to be brought for them.
A visit to the manor house, or, The twelve days at Christmas: with hints for improvement, By A Lady, 1819.

Where to start? Oh, glory. Not only are they getting seven year olds liquored up on Boxing Day, but the whole book is about the charitable deeds of la-di-dah Lord and Lady Castlemain. I should send a gift copy to Slavoj Zizek, just to hear what he'd say.

When I was a tiny girl I used to think that "Preface" stood for "Peter Riley Eats Fish and Catches Eels." Later, I thought that the preface of a book was a thing to be avoided; but now I realize that reading a book without glancing at the Foreword is like talking
to a person you have never been introduced to.

Margaret E Sangster, Friends o' mine: a book of poems and stories, 1914.

This showed up when I googled 'Twelve Days of Christmas', no idea why. The preface alone would put you off your Christmas dinner. This lady goes on to say:

I have always looked forward eagerly to writing my first book, but now that it is written, I hardly know what to say to you about it. I only hope that you will like the little bits of song and story, for they are about real people and real happenings, with my dreams and
imaginings tucked in.

Your Editor is speechless. Supply your own remarks below.

December 25, 1943: You just can't think about the nice things at home and the things you are missing and still be in the right frame of mind to fight the Japs.

William Bradford Huie, Can Do! The Story of the Seabees, 1944.

No, somehow Christmas and being in the right frame of mind to fight anybody don't compute. Again, no idea why this turned up. I blame the search engine, or 2legs.

All right. I give up. Don't read anything this week. I mean it. Go over to Netflix or Amazon and watch a film. Netflix has White Christmas, in which a couple of male chauvinist entertainers manage to win over their girlfriends while paying tribute to their former army commander, a sort of cross between Eisenhower and Patton. Alternatively, you can watch Deterrence on Amazon Prime. A US president takes refuge from a snowstorm in a Colorado diner, where he organises a mobile command post, sets the Football down next to the ketchup, and threatens to nuke Baghdad. A good time is had by all.

What is wrong with this season, anyway?

PS: Closer to press time, Amazon Prime added Season 2 of The Man in the High Castle. Once again, we're not sure why this is holiday fare. But that opening, in which some breathy Swedish chanteuse intones 'Edelweiss' as if it were, indeed, a patriotic song, gets me every time. And at least here, all the mean talk and general evil thinking takes place in a parallel universe.