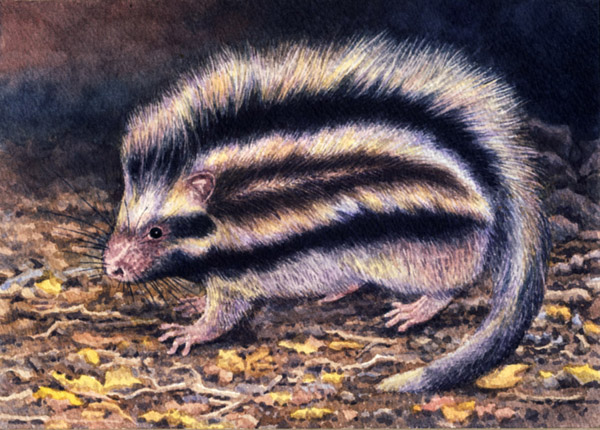 This strange thingy is a Maned Rat, Lophiomys imhausi. This weird and unique rodent lives in northeast Africa, and might also occur on the Arabian Peninsula, though I am unable to find confirming evidence for this. It is a fairly sturdy little creature, reaching an overall length of about 55 cm/22" and a weight of about 900 g/2 lbs. Very few people have ever seen it, and I could get only a few photos on the 'net to work from. Its habitat appears to be fairly dry, rocky regions, with scattered trees and bushes, but it also occurs in juniper forests. It is very unique, sometimes being put into a family of its own, or at least in a subfamily of the main rat-and-mouse family. Among these, it might be most closely related to hamsters, though being much bigger.

This rodent looks much like a small porcupine, but it is actually a rat, and doesn't have spines. Instead it has very long fur, raised into a long mane on its neck and back. On its sides the long fur parts along a line running from just behind its head to the base of its tail. The fur can be opened up along this tract to expose a glandular region; the fur here is brownish and coarse like hemp rope. Beyond this the long fur makes a bold pattern in black and white. When threatened, the rat turns side-on to the animal or human threatening it, and raises its fur to expose the tract and the bold lines of colour alongside it. In this respect, it much resembles a skunk, or its African counterpart the striped polecat. In these noxious mammals, the bold black-and-white striped pattern operates as a warning signal, to warn any predators tempted to try a bite that they're going to be squirted with something foul. So it seems that the Maned Rat is also giving a warning.


In its case, we still haven't quite figured out what this warning is entirely about. The tract of fur along its sides covers an area of skin dense with glands, and these exude a noxiously smelly secretion. But there's apparently more. Dogs who have caught and eaten maned rats have actually died. Is it poisonous? If so, it would be one of very few mammals that have poison or venom. But it is possible that it is not poisonous in itself. It eats, among other things, the bark of bushes of the genus Acokanthera, which are very poisonous, and according to one source they rub their own saliva containing some of the latex onto their sides. This poisonous sap is then absorbed by the ropy fur along the tract of hair, and so the rat itself becomes poisonous. The smell, the bold patterns and the display therefore warn that if it gets eaten there will be dire consequences.


Another strange feature of the maned rat is its skull. It has a very strongly reinforced skull roof, from the back of the skull to over and around the eyes. The bone here has a grainy texture, somewhat resembling the bumps on the shell of a tortoise. In addition, it has thick skin and enlarged vertebrae, all of which gives it protection if bitten. Like tortoises, it is a slow-moving animal. It actually seems to invite being bitten at least once … predators who do that and survive, are unlikely to do it twice.


As for its lifestyle, there is much we still don't know. It appears to be mainly nocturnal. It waddles about on its short legs, seeking tasty plants – it eats fruits, leaves, shoots and bark. It also on occasion catches and eats insects. Like mice and squirrels, it often eats while squatting on its haunches and holding the food in its hands as it nibbles at it. It has opposable thumbs just as we do, making it a deft manipulator. It can also climb over rocks and into bushes and trees. It shares its rocky habitat with rock hyraxes. While it is fairly widely distributed, it appears to be very rare, occurring at low densities. It might be endangered; as it is, there's no specific conservation plan in place to protect it.