Margaritas ante porcos Superfrenchie, we apologise for being us.

A Typical Day in NaJoLand 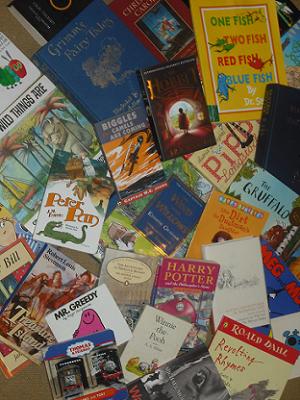 When I was a little girl (that was last century), I was offered the French translation of Margaret Wise Brown's Good Night Moon ("Bonsoir Lune").

And a few years ago, I offered my niece C the English version. Several times since then, when I've been at their house for the week-end, I've been asked to tell it for the goodnight story time.

This past week-end was no exception.

Except, this past week-end, we couldn't find it.. .

And C asked me to read it in English.

The instant translation was far from perfect, but she seemed to enjoy it all the same.

This is what she got in response

Dmitri Gheorgheni: Cool! 'Chenille' is French for 'caterpillar'? You know what a chenille bedspread is in English, right?

Paulh: Shake the chenille bedspread and watch the butter fly.

Superfrenchie: No, Dmitri, I didn't know.

Dmitri Gheorgheni: Boy, great, we both learned something!

Superfrenchie: And I think Gnomon wins the trivia game for today ! I never really thought about the origin of the word, but it's interesting.

Ed. Notes:   The Moral: A good NaJoer is not only a resourceful writer, but tactful, and patient when the readership drag her far off-topic. Superfrenchie is a very good NaJoer.