What is that mysterious humming? It's Freewayriding in the kitchen. Take that, Proust. 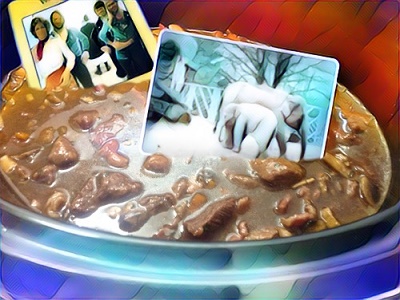 Stirring the pot, red wine and beef bubbling away nicely, aromas filling the house, singing away to myself in the kitchen. Dum de dum de dum de dum....

Then, "Dad, why do you always do that song when you're making stew?"

Good question. One that brings back memories from when I was a ten year old.

My grandad worked as a cook (Strangely for the same local transport authority I find myself employed by today). Bloody good cook he was, too, but one thing he always left to my mum and nan to prepare was stew. They were the experts. My family's Liverpool roots often labelled this cheap but delicious meal 'scouse' but forty years on its now simply beef stew, with or without a French name depending on what's to hand.

Back then any leftover meat from Sunday roasts was reserved for the big pan of scouse that, in my foggy memory, always seemed to be available at either my mums or my grandparents house, simple ingredients compared to how I make it nowadays, but the smell still triggers memories.

We had been to Chester zoo. In April, bloody freezing, I recall, but a great family treat. Today we can bundle into the car and be at the zoo in ten or fifteen minutes, back then, three buses and a hike took around a couple of hours.

I remember my grandad had bought cheap tickets for a company run family day excursion, leaving from the Woodside bus depot where he worked. Sadly, those buildings where I often accompanied my 'gag' on weekend culinary adventures now long gone and replaced by the new Mersey Ferry terminal.

So a nice day out, if a little chilly, then the sprint home to watch the highlight of my mum's televisual year. The sprint due to a delay in the last bus we needed to get home, panic loomed at the thought of missing the start.

For us kids: the promise of sweets and crisps and a rare late night as the yearly ritual began.

My nan had a big pan of steaming stew ready for us. I remember sitting crosslegged on the living room floor as we squeezed around the tiny tv set, pushing buttons frantically (no remotes back then!) and waiting for the set to warm up.

atie Boyle did her pre Wogan thing and we sat mesmerised by the promised glut of musical talent (or lack there of), slurping our meals as the pop hopefuls from around Europe invaded our small terraced house.

One such pop group had me dribbling gravy down my front from the moment they appeared, commentator explaining the strange name was simply made up from the initials of their collective names as the two guys and two rather pleasant looking girls peeped out from behind a large plant on the intro.

Enter their Conductor, bizarrely dressed as Napoleon, seventies glam exploded onto the Brighton stage, I was totally covered in beefy dribbles by the time they had finished their brief but instantly memorable song to rapturous applause.

Obviously they won by a Swedish mile.