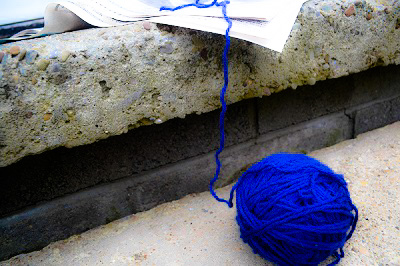 She pulled her cardigan as closed as she could manage around her bump. The April evening becoming chilly as she sat on the small brick wall outside the little terraced house. Hands alternating between her knitting and stroking her unborn child, both gestures automatic, needing no conscious effort. The needles clicked away, it would be summer when the baby came and all those winter patterns would have to wait a while, such a shame as she enjoyed making cardies and hats.

Her knitting momentarily interrupted by the arrival of the evening paper, she thanked the young lad and, without even glancing at the front page, slid the Echo beneath her, insulating her bottom from the ever cooling brickwork. This job was starting to get her down a little, for months now her husband had been leaving the house at dawn and not getting home till way after the little ones had been put to bed. Missing out on so much family time but the money would pay for a deposit on a bigger house for when the baby arrived, still such a shame.

The baby kicked, reminding her of the sleepless night before. Tired and uncomfortable, she had been awake hours before the four o'clock alarm had roused her husband. He'd kissed her and the bump, adding two more for the little ones snoring softly in the other bedroom, reluctantly dressing, ready for the long trip to work. She'd selfishly asked him to stay home, she hadn't slept well and felt a little off, could he not have a day off.

Sick and tired of the long long six day weeks he'd been required to work, he was tempted but, working alongside his brothers, didn't want to let them down or lose a day's money from the house fund. He kissed her again before leaving. It would've been so nice to have a day spent idly together but needs must. Such a shame. The door closed quietly as daylight broke through the cheap curtains.

He'd left her a note, of course, in the kitchen. A daily ritual. Amongst the hearts and kisses and designs for their dream home, an apology.

That local band he'd been going on about had been on the radio again, brilliant stuff, but apparently they were now wowing America, so all thoughts of a ferry ride over to the Cabin would have to wait til next year...at least the poor baby wouldn't get deafened! Although she preferred Dean Martin and Perry Como, it would've been nice to have a night out with him, seeing him starry eyed as he sang along to his new favourite band, still with them busy "wowing" the Yanks it would have to wait. Such a shame though.

Dusk thickened, his tea would be ruined if the buses were late again. A lone motorcar thundered by at the top of the street, the main road empty as the blue smoke settled. He'd thought about buying a car once they'd moved if money was okay, but the one go he'd had in a friend's van had put him off. For an engineer he was hopelessly inept at making the bloody thing go! Still, would've been nice to take the kids out on trips without waiting for buses, such a shame.

A figure rounded the corner. Although not him, she knew instinctively he would stop at her doorway. New also with a sickening, dizzying certainty what the policeman was there for. Her knitting and the newspaper fell to the floor as the ashen faced young officer halted before her. The wool rolling along the pavement into the gutter, baby blue ruined in an instant. Such a shame.

Her mother and father arrived within minutes, comforting her as best they could, given such shocking news; the poor girl couldn't even stomach a cup of tea as the policeman gave a sketchy account of the events of earlier that day. She'd sobbed her little heart out, not comprehending the details but heartbroken, truly heartbroken. Such a shame.

The officer stooped as the door closed behind him, picking up the Echo as it flapped in the breeze. Headlines proclaimed Beatlemania had hit America.

The other 'stop press' headline reported that a young local man had been tragically killed in a work accident over in Manchester, his elder brother also badly injured but the youngest thankfully surviving unharmed. Thoughts go out to his pregnant wife and young family. Such a shame.

Six weeks later I came into the world. My childhood was almost idyllic, but for that one day my dad had had to work.

Yes, it was such a shame.