MVP says, 'The story's fiction but the place was real.' 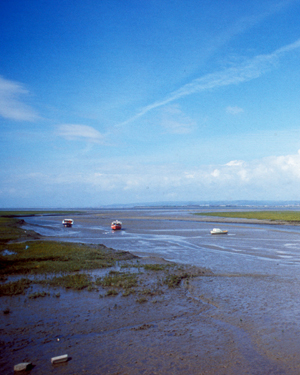 I wandered alone along the embankment. My Dad and brother David were working on our boat after a sailing trip but I wanted to watch birds. I ignored the wind, which felt as if it came straight from Siberia. On one side, the River Medway sucked and licked as the tide retreated, leaving banks of glistening mud. On the other side lay a marshy place, where the wind ruffled through reeds and sent ripples across half-hidden pools. I raised my binoculars. At first, I only saw small, brown birds flitting between reed beds and trees. There was a sudden commotion over the water, as a flock rose into the air in a whirl of black and white wings. I watched as they flew towards me, then turned and headed back towards the horizon.

Realising I was getting cold, I started to walk back towards Elmley Sailing Club. It was a ramshackle place, with old cars and dinghies strewn across a corner of land between the river and a creek. The clubhouse was a wooden-hulled ship, which was gradually settling into the mud of the creek. I thought it looked like something out of David Copperfield but my brother said it was an old minesweeper.

As I approached, I saw a movement near the mouth of the creek, a grey shape which might have been a shadow. At first I thought it was a heron taking off. The shadow thickened and took the form of a man. He was so hunched that his head was almost hidden in his coat and he was wading through mud or water. I hurried towards the creek, wondering who would try to walk there. The man was struggling, growing weaker and sinking. Breathless I reached the edge of the creek and stared. All I could see was a tongue of grey-brown water and an expanse of glossy black mud. There was no sign of the man.

I ran along the creek towards the club house and rushed up the set of wooden steps which led to a door in the side of the hull. The owner, Jay Sansom, was sitting by the bar with a glass of beer. With his earrings, dark hair and eyebrows, he looked like a pirate.

"There's a man drowning in the creek!" I gasped.

"Drowning?" said Jay. "You couldn't drown in that creek at low tide."

"But I saw him. Then he vanished. He must have sunk in the mud."

Jay opened a door to a storeroom and brought out a ladder and a length of rope. "I hope you're not having me on."

In a few strides, he reached the steps and I followed. He walked the length of the creek, from the club house to the embankment, stopping from time to time and looking out across the mud. Near the embankment, he deposited the ladder and rope on the grass and turned to me, frowning. "Nothing. If anybody had gone in here you'd have seen the footprints."

I was wondering what to say when Dad and David walked towards us from the landing stage. Dad was carrying a bag full of sails and David a pair of oars. They looked rather alike, as David was as tall as Dad and they both wore glasses.

"Your daughter has been making out that she saw a man drowning but there's no sign of anybody here," said Jay.

"Someone told me there was a ghost," said David. He was two years older than me and claimed to know a lot more, so I didn't expect him to tell ghost stories.

I was more surprised when Jay nodded. "There is a story. Why don't you come back to the club house and I'll tell you."

Before long, Dad, David and I were sitting in the clubhouse, on seats arranged on both sides of an old oak table. Jay poured beer for Dad and himself, orange juice for David and me. Then he sat down next to Dad.

"The story goes like this. There was a man who everyone called Mac, though I don't know what his real name was. He used to live on a boat here, moored not far from the mouth of the creek. When the weather was good, he would sit at an easel on the embankment and paint. I saw his paintings and they were very good. Boats and the sea and birds. But he was often drunk and he could get angry and sometimes he was violent. He threw a beer glass at me once."

Jay paused and drank a mouthful of beer. "I never got much out of him about his background but he talked to my wife. He'd been married, had two daughters but he had some row with his wife and she threw him out. I have a suspicion he'd hurt her and she'd had enough. Anyway, he came here and tried to put his life back together. He told Sally that the one thing he really wanted was to see his daughters. But his wife wouldn't let him.

There was a long pause before Jay started again. "We don't really know what happened, but one dark night he set out to swim from his boat, out in the channel, to the embankment. It maybe he was too drunk to know what he was doing, but it seems more likely he knew he wouldn't make it. It looks as if he got stuck in the mud and then the tide caught him. Ever since, there have been rumours that his ghost has been seen, trying to walk across the mud." He looked at me. "Interestingly, the people who claim to have seen him have all been young girls, about the age of his daughters."