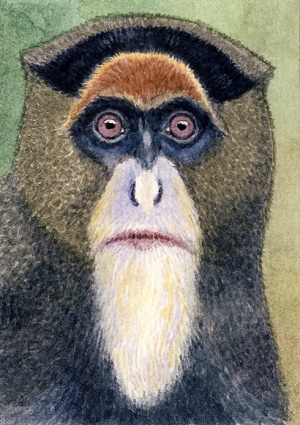 This is another mini-painting, the original measuring only 2.5"x3.5"/6.4cm x 9 cm. This is the face of De Brazza's Monkey, Cercopithecus neglectus. The species is named for Pierre Savorgnan de Brazza, an Italian-born French Explorer who explored the Congo River and surrounds. He was one of the cooler of the old-time explorers, having cultivated peace and harmonious interaction with the native African peoples he found. The capital city of the Congo, Brazzaville, is named for him, and so is this monkey. Its scientific name means 'neglected tail-monkey' … I don't know why it's neglected … except maybe for being one of Africa's prettiest monkey species and yet not being widely known! And it's a high honour, since Africa has an incredible diversity of beautiful monkey species. It is generally not recognized just how diverse they are, with an incredible array of hair styles, facial 'make-up' patterns, and bright colours.


De Brazza's Monkey in particular is very dashing and dignified-looking, with its orange 'crown' and long, white beard. Even the females have the beards! And they get them as soon as they're mature. The rest of this monkey is coloured black, white and a grey sometimes with greenish tints. There's a conspicuous white stripe running down the outer surface of each thigh. The female's naughty bits are bright pink, and those of the male bright blue. Females are also somewhat smaller than males, averaging about 4 kg/9 lbs while males can weigh up to 8 kg/18 lbs.


In spite of this monkey's dapper colour scheme, it can be surprisingly hard to spot. Indeed, I've never seen one! Well … that's understandable, since they don't occur in South Africa. They belong to the great African rainforest belt from the Cameroon through the Democratic Republic of the Congo and with outliers in mountain forests in Ethiopia and Kenya. De Brazza's monkeys prefer the trees growing alongside rivers, only rarely moving away if necessary to reach abundantly-fruiting trees. What these monkeys like about the river-margin vegetation, is that the ground is frequently flooded, making it hard for leopards and other ground-based predators to stalk them. The dense and thorny undergrowth in the more open patches also defend them and are a refuge from eagle attacks. De Brazza's monkeys tend to stay fairly low down, mostly below a height of 5 m/16', but venturing higher to feed on fruit in the tree crowns, where they also sometimes will sun-bathe.


When threatened, De Brazza's monkeys will freeze and hide their conspicuous faces behind leaves and branches. Their greenish-grey grizzled backs blend in surprisingly well with the bark and foliage, making them very hard to spot. They can remain frozen like this for an incredible eight hours, uninterrupted! They only return to activity when feeling completely safe. They climb very slowly and deliberately, generally moving in a measured, dignified way.


Male De Brazza's monkeys are dominant, the groups typically being fairly small, up to about 35 individuals, including his several females and their offspring. But sometimes they form monogamous groups, with one male and just a single female and their kids. The male has a low, booming call that can be heard far away in the forest, by which he keeps his own troop together, and advertises and secures his territory against neighbouring troops. These territories stretch in narrow lines along the jungle rivers, a typical territory being about a kilometre in length and covering about 10 hectares. The more food the environment has, the smaller the territories. There can be a small area of overlap between the territory of one troop and those of its neighbours. De Brazza's monkeys tend to be sedentary – their territories remain in the same area, essentially permanently. They don't tolerate other monkey species in their territories, quite unlike many of the small, fruit-eating monkeys of the rainforest belt which frequently form mixed-species troops.


The dominant male communicates with the rest of the troop using his voice, as well as by shaking branches to rustle the leaves, and by posing to show off his white beard. On the other end of his body, the prominent white stripes along his thighs are similar signals, and he often turns around so as to show off both his back and his front. He will shake his head from side when he's stressed, and nod it to signal approval to his troop members. In these head movements, his white beard always constitutes a very prominent visual signal. The entire troop utter quiet grunts to stay in touch with each other. These monkey are also unusual in scent-marking their territories; for most other monkeys, visual and audible signals are far more important than scent.


De Brazza's monkeys are largely vegetarian, eating fruit, supplemented with some seeds, leaves and herbs. They eat a small amount of animal food, mostly grubs and pupae of beetles and moths, and some other invertebrates. They search for these methodically and painstakingly on tree trunks, in the undergrowth and on the forest floor. The larger adult monkeys descend to the ground more than the juveniles do. The young monkeys are vulnerable to crowned eagles; all monkeys are preyed upon by leopards, chimpanzees, and humans. They can reach an age of 22 years in the wild, 30 years in captivity. De Brazza's Monkey is endangered in Kenya, Ethiopia and Uganda, because of their forest habitat being cut down by humans, but they are still numerous and safe in the vast remaining forests of the Congo River basin. 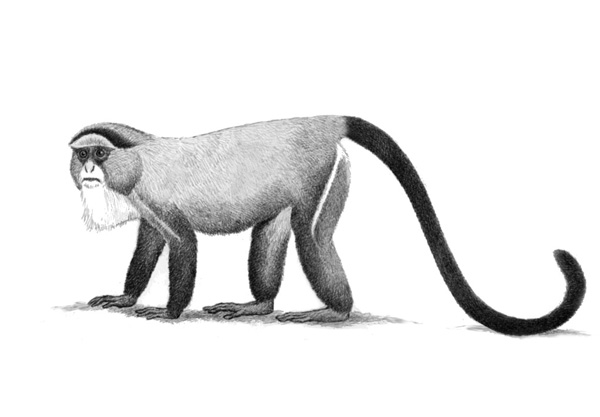