For an educational writer who's spent dozens of years in classrooms, I've had relatively little educational training. When I started graduate school, we had a three-day seminar before being turned loose on undergraduates who wanted to learn German. I coped, and so did they. My first lesson, though, was a disaster.

I actually ran through five chapters of the German for Reading book in 45 minutes. I was nervous, and nobody asked any questions, so I kept going. I didn't recognise that 'deer in the headlights' look for what it was until a bright young freshman woman came up to me and asked, 'Are you always going to go this fast? Because I don't think I can keep up.'

She replied graciously, 'Gee, you couldn't tell.' I laughed all the way to my next class – where I figured out how to elicit responses from students to see if they were 'getting it'. I never looked back, and I remained grateful to that plucky student. (Always give feedback, it should be a rule.)

It was like that for most of my 'teaching career'. I learned as I went along. Students mostly seemed to do well in spite of (because of?) my lack of theoretical expertise. But wherever I went in the classrooms of three countries, the main thing I kept in mind was what an educational instructor told me at one of the rare seminars I had the chance to attend: remember to Reduce Teacher-Talking Time.

You know those teachers. The ones who made you hate the subject. Oddly, most of them were enthusiastic and loved what they were teaching. But they didn't teach it to you, at least not very well. You see, they had so much to say that there was never enough time to get it all in. They had to unload all of their erudition on you, right now. They really couldn't wait for questions from the Peanut Gallery.

And so you didn't learn, no matter how much they talked. Talk, talk, talk. But by the time they paused for breath, you'd forgotten what you wanted to ask. And you couldn't work the problem, produce a synthesis essay, or parse the verb. What a waste of time.

Now, why am I going on about this in a writing column? Because writing is teaching, whether you know it or not. You're trying to entertain people, sure. You're probably trying to inform. And you're trying to get a point/story/idea across. To do that, you've got to teach it. But not like the kind of teacher who performs unlicenced infodumps on the captive student audience.

You need to reduce Teacher Talking Time. Take this example: it's the beginning of a short story by Philip K Dick. This is the very beginning of the story. Everything you know about the setting, you're learning for the first time from this passage.

THEY had almost finished with the loading. Outside stood the Optus, his arms folded, his face sunk in gloom. Captain Franco walked leisurely down the gangplank, grinning.

"What's the matter?" he said. "You're getting paid for all this."

The Optus said nothing. He turned away, collecting his robes. The Captain put his boot on the hem of the robe.

"Oh?" The Optus turned with dignity. "I am going back to the village." He looked toward the animals and birds being driven up the gangplank into the spaceship. "I must organize new hunts."

Franco lit a cigarette. "Why not? You people can go out into the veldt and track it all down again. But when we run out halfway between Mars and Earth – "

The Optus went off, wordless. Franco joined the first mate at the bottom of the gangplank.

"How's it coming?" he said. He looked at his watch. "We got a good bargain here."

The mate glanced at him sourly. "How do you explain that?"

"What's the matter with you? We need it more than they do."

"I'll see you later, Captain." The mate threaded his way up the plank, between the long-legged Martian go-birds, into the ship. Franco watched him disappear. He was just starting up after him, up the plank toward the port, when he saw it.

"My God!" He stood staring, his hands on his hips. Peterson was walking along the path, his face red, leading it by a string.

"I'm sorry, Captain," he said, tugging at the string. Franco walked toward him.

The wub stood sagging, its great body settling slowly. It was sitting down, its eyes half shut. A few flies buzzed about its flank, and it switched its tail.
It sat. There was silence.

"It's a wub," Peterson said. "I got it from a native for fifty cents. He said it was a very unusual animal. Very respected."

"This?" Franco poked the great sloping side of the wub. "It's a pig! A huge dirty pig!"

"A huge pig. It must weigh four hundred pounds." Franco grabbed a tuft of the rough hair. The wub gasped. Its eyes opened, small and moist. Then its great mouth twitched.

A tear rolled down the wub's cheek and splashed on the floor. 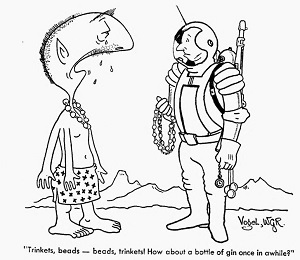 Now, first off, if you can resist reading the rest of this story, you've probably already read it. In case you haven't yet, I've included the link to the Gutenberg etext. You'll enjoy this one.

Notice something about the story. There is no visible exposition. That is, it doesn't start, 'A long time ago, in a galaxy far, far away…' Nor does it begin, 'It was the best of times, it was the worst of times…' It begins, 'They had almost finished with the loading.' Immediately, we have questions. Who are 'they'? What are they loading? Is it a ship, an airplane, a lorry? It has a gangplank, wait…it's a spaceship. There are villagers, exotic animals, we're not on Earth…we don't like the captain… We discover all this for ourselves.

And that does two things for us as readers.

Joe doolin's my name. Cowhand – work for old Farrel over at Lazy F beyond the Pass. Never had much of anything exciting happen to me – just punched cows and lit up on payday – until the day I happened to ride through the Pass on my way to town and saw young Buck Tarrant's draw.

Now, Buck'd always been a damn good shot. Once he got his gun in his hand he could put a bullet right where he wanted it up to twenty paces, and within an inch of his aim up to a hundred feet. But Lord God, he couldn't draw to save his life – I'd seen him a couple of times before in the Pass, trying to….
'The Draw' by Jerome Bixby, from Amazing Stories, vol. 28, no. 1, March 1954, p.51.

Now, I'm sure there's a story in there. But how much work will be involved in finding it? Apart from the subject matter, will you enjoy reading it as much as you would Philip K Dick's? Whose fault is that, yours or the writer's who won't shut up and let the story talk?

And don't get me started about writers who expect you to memorise their entire imaginary universe before they tell the tale… I have one response to that kind of writing: I put down the book and do something more useful with my free time.