Minorvogonpoet has a royal tale to tell.

The Prince of Wales in Aberystwyth 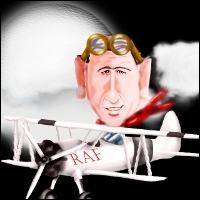 It was 1968 and I was in Aberystwyth. When I arrived at the University College of Wales it hadn't occurred to me that being English in the heart of Wales could be a problem. I simply thought it sounded a beautiful place, perched on the edge of Cardigan Bay. The town itself was built of grey stone and slate, but the sea offered an almost infinite range of moods and colours. Sometimes, it battered the sea wall with such fury that anyone leaving a building along the front would be doused in spray. On other occasions, it lay like beaten silver.

But Aberystwyth was in the heart of nationalist Wales. In universities up and down the country, students were demonstrating against the Vietnam war but, in Aberystwyth, they were demanding Welsh independence. Students took over a lecture theatre to demand that more subjects should be taught in Welsh. They draped signs on the walls, reading 'Cymru Cymraeg'. The word Saesneg – English – became almost an insult.

Into this nationalist hotspot came the Prince of Wales. A few months before the Prince arrived, I had been sitting in a lecture hall chatting to my friends. The conversation turned to the plan to stage an investiture for Prince Charles at Caernarvon Castle.

"I don't think it's right," said my friend Meinir. "Caernarvon's too associated with the English conquest."

"But do they have to make such a fuss about it?" I asked.

A young man with a thatch of dark hair turned round. "What do you mean?" he demanded aggressively.

"I think it's a stupid thing to do," I backtracked.

When the prince arrived in Aberystwyth to study Welsh, someone threw a stink bomb. No-one was hurt but it caused a flurry of excitement. Aberystwyth was usually a sedate town. It had chapels of every denomination and, though there were as many pubs, none of them were open on Sunday.

The nearest I got to the Prince of Wales was one day when he walked out of the Main Hall of the University. He was instantly recognisable; no other student would wear a grey suit on a warm June afternoon. A group of lecturers and officials accompanied him, as if expecting to become important by association. A motley collection of students lounged on the grass, doing revision, chatting or reading. To my surprise, many of them stood up. As some of the girls had decided to do their revision in bikinis, this might have provided a pleasant surprise for the Prince.

Of course there were societies, many of which invited Prince Charles to their meetings but he politely declined these offers. Most students, Welsh and English, simply regarded his presence among them with interest. Meinir sat next to him in a Welsh history lecture and reported that he chatted to her pleasantly. I don't know what the Prince thought of Aberystwyth but I imagine that the University authorities were glad his visit went off without too much trouble.